If you like travelling around Japan and want to go deeper into Japanese culture, then you should not miss a visit to Sumo. With Japan Wonder Travel, you can go directly to the Sumo wrestlers training stable and learn all the essentials about this Japanese ritual sport.

During our visit to Japan, we decided to get to know the local culture as much as possible, so we wanted to see a match of the traditional Japanese sport Sumo. But what is the best way to get this kind of match?

Sumo tournaments take place 6 times a year in Japan. Each tournament lasts about 15 days, and it is a big event. Match tickets are very expensive and sell out fast well in advance. If you want to see Sumo, we recommend going to the Sumo stable and see wrestlers training. In the hall, you will be alone with a few other tourists, and you will be able to watch various training methods. It can be a much more interesting experience than if you visited the tournament itself. 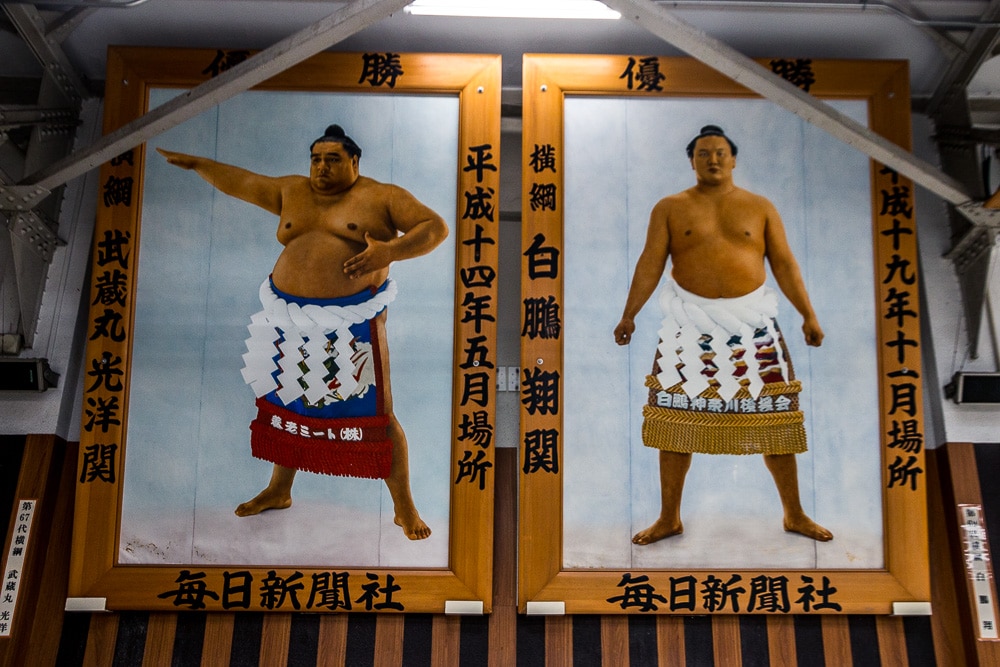 Japan Wonder Travel is focused on food tours and is dedicated to Japanese cuisine. We had already attended their Tokyo Food Tour of the Tsukiji Fish Market, where an experienced guide led us through a local market full of Japanese specialities. We were so excited about the tour that we decided to take a tour to the Sumo stable and watch Sumo morning training, and we didn’t regret it! We appreciated the fact that we could come in touch with nice Japanese guides who speak English and are willing to share information about their country, culture and opinions with you. 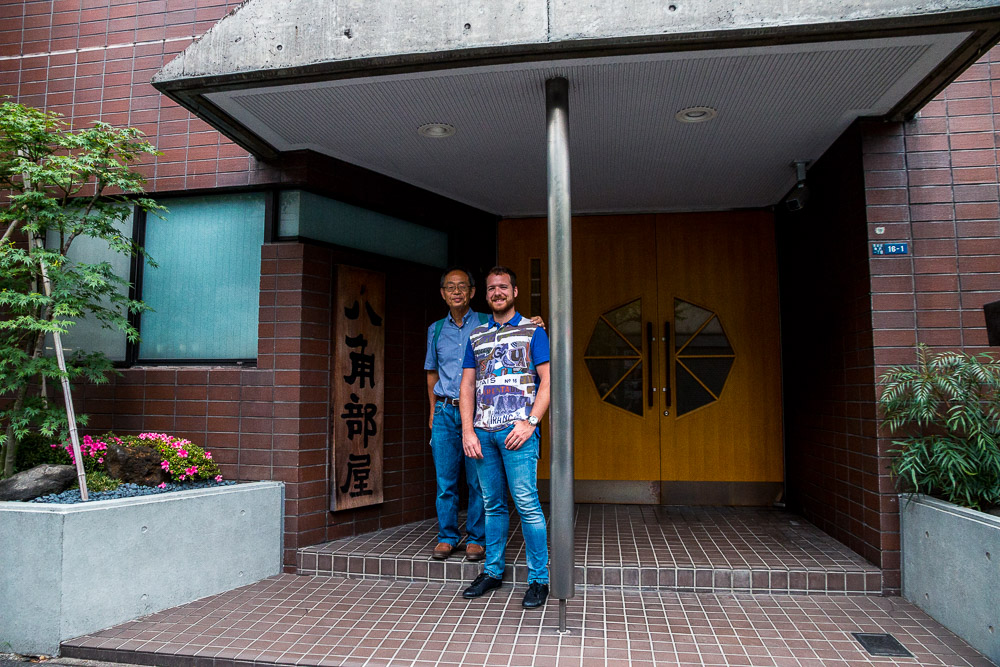 Tom with our guide in front of the training hall

How to visit training Sumo wrestlers

At the Ryogoku train station, we met our guide Tag, who welcomed us very warmly. He gave us handouts where we could read what awaits us for the program and began to explain what the Sumo matches are. Tag explained that Sumo is a very old Japanese sport based on the original Shinto religion, whose first mention dates to about 712. Although the Japanese prefer baseball today, Sumo has a long tradition in Japan. It is a very ritual combat sport associated with various ceremonies. Until now, we have lived with the idea that in Sumo, the robustness of the wrestlers, who are pushing in the ring, is important. That’s not entirely true. Sumo wrestlers are real athletes, and there is no weight category in Sumo. So it is possible that two wrestlers with totally different body proportions will compete in the ring, and the bigger one doesn’t always win. Although it doesn’t seem to be a technique in Sumo, weight is just one of many factors that can decide how a wrestler wins. 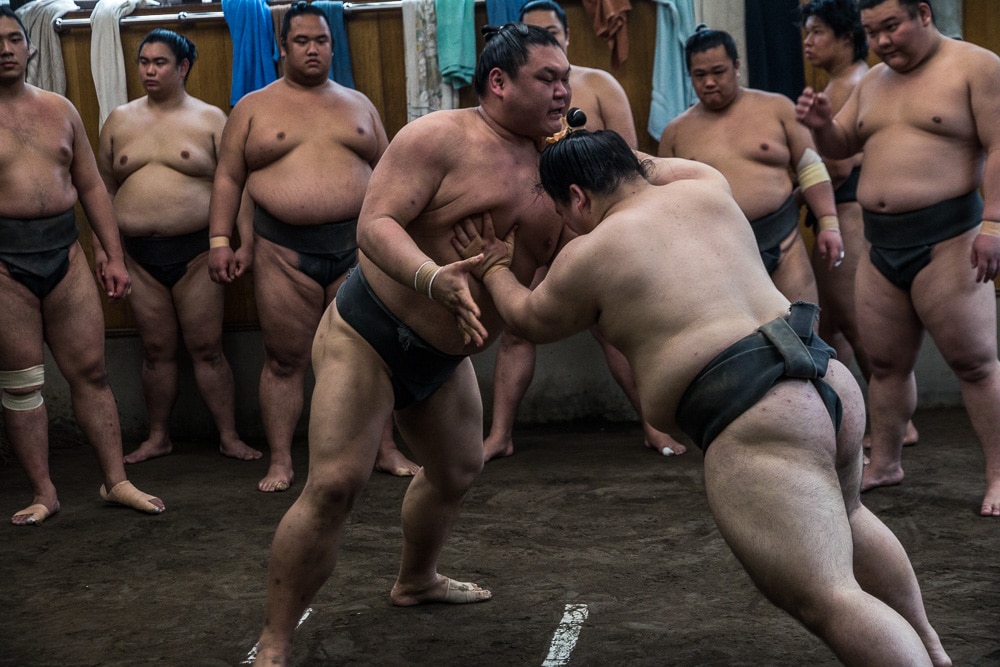 Tag also explained that there is a strict hierarchy (leagues) among members in Sumo. Wrestlers fall or rise in the hierarchy, depending on how many successful matches they have. The one who gets to the very top is called Yokozuna. There are special rules for him, and he can no longer descend to a lower league. Yokozuna, however, is expected to display ethical and moral behaviour in his personal life, which is very important for Japanese, in addition to his super sporting achievements. 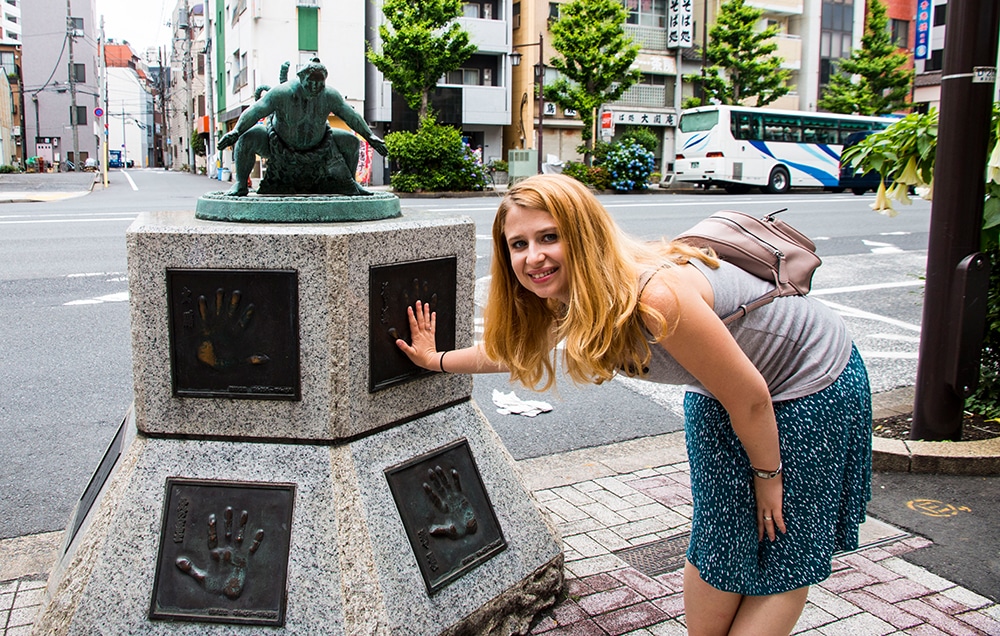 Meanwhile, as Tag carefully explained to us all about Sumo fights, we slowly arrived at the training hall. To be able to participate in the training and not disturb the wrestlers, we had to follow a few simple but strict rules. We had to sit in the room very quietly, and no talking or loud clicks from the cameras were allowed. When we entered the training room, we were surprised at how close we were to the ring.

The rules of the Sumo match are very simple. The two wrestlers standing opposite each other are trying to get the other out of balance using various techniques. The loser is the one who gets behind the line of the ring first or touches the floor with another part of the body than the foot. 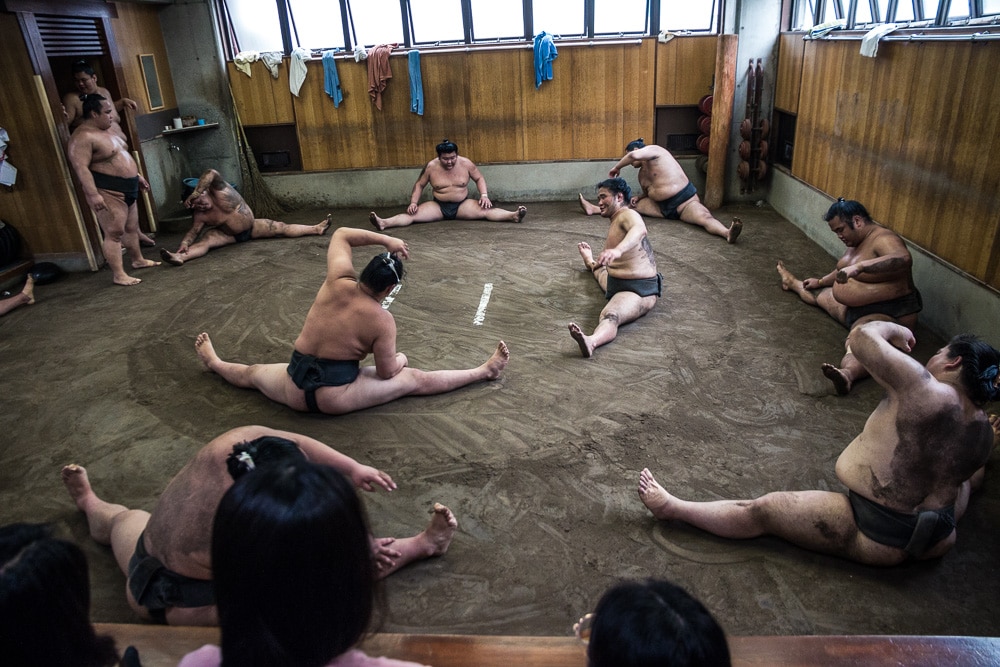 Along with a few tourists sitting next to us, we were the only participants in the wrestling training so we could enjoy the whole atmosphere of the fight. We could observe various techniques of fighting, strengthening or stretching wrestlers. We were very surprised by their flexibility, which is important for avoiding injuries. Although they are fat, they have incredible muscles on their legs, and they are very agile. A visit to Sumo training breaks down a lot of the myths we had about the sport.

Wrestlers use a very hearty diet to gain weight that they can use in a duel with an opponent. They eat a special dish called Chanko. It is a highly nutritional dish consisting of meat, fish and vegetables served with rice. 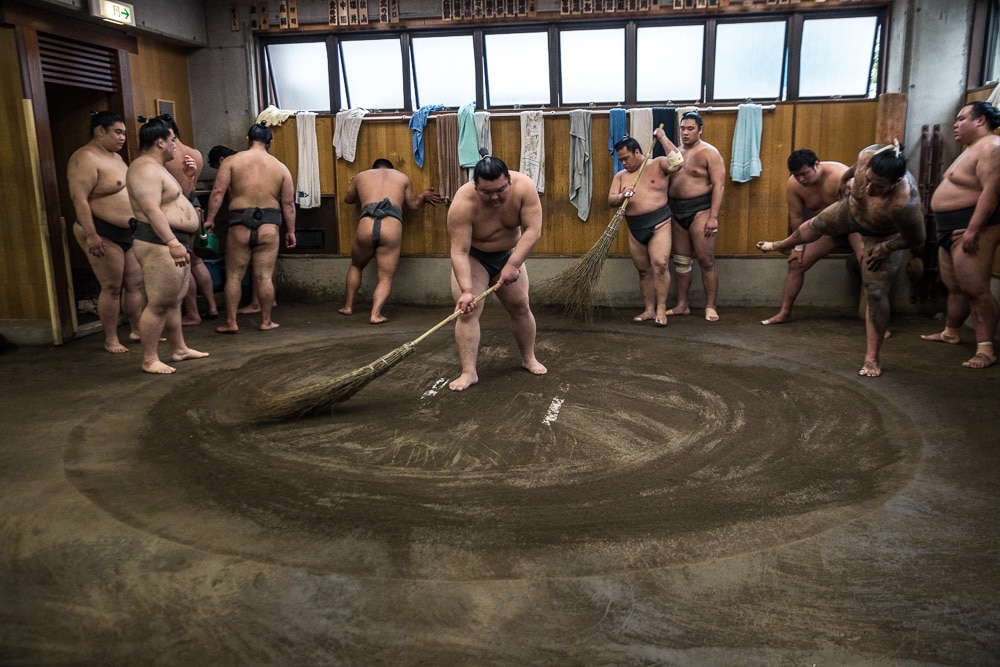 There is a strict hierarchy among Sumo athletes

The training lasted just over two hours and included some rituals that are hard to understand for us Europeans. We could even take a picture of Sumo wrestlers at the end of the training. Tag took us back to the train station and answered a lot of our questions on the way. We passed a few restaurants which serve meals that Sumo wrestlers eat to gain strength. We also came across a few souvenir shops and passed a few statues of significant Sumo champions who have entered Japan’s history. 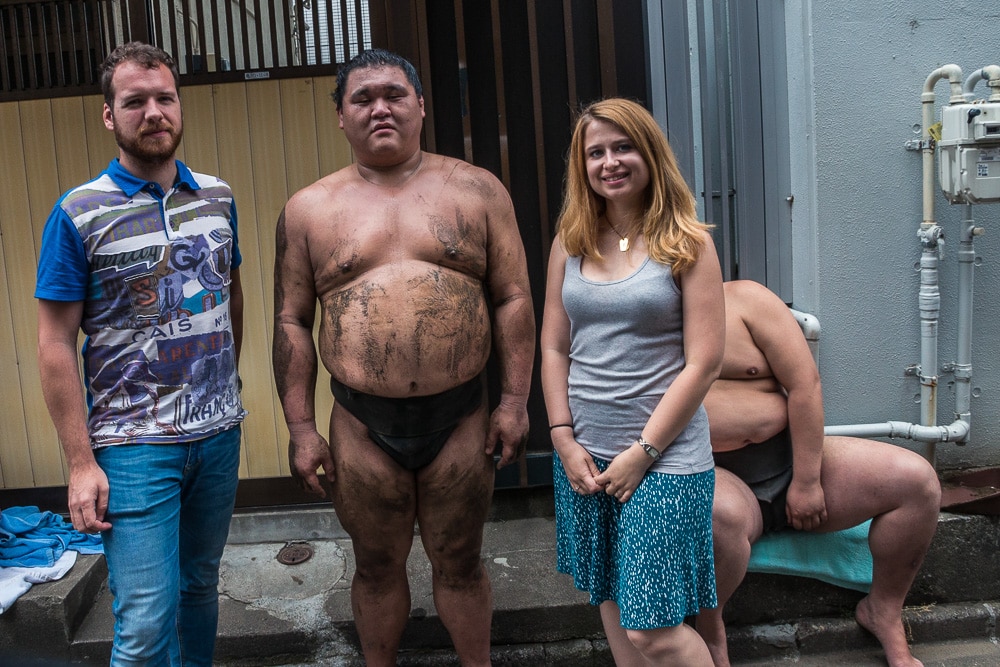 After the match we could take a picture with one wrestler

We were very excited about the whole visit to the Sumo stable and watching the training, and that brought us a little closer to understanding the complex and unique Japanese culture.

Thanks to Japan Wonder Travel for support during our visit to Peru. All our views are based on our own experience.

READ NEXT: 6 Great Tips for Planning a Trip to Japan 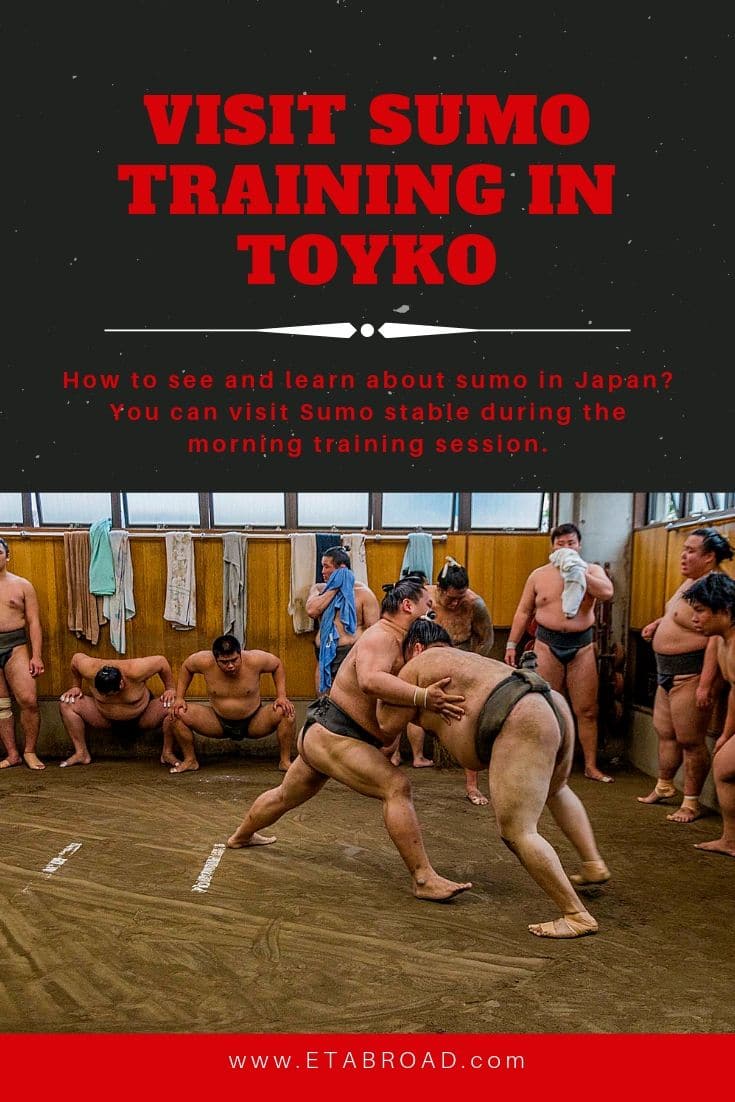