What to Do in Kuwait – Discover Exotics in the Persian Gulf

What to Do in Kuwait – Discover Exotics in the Persian Gulf

The small country of Kuwait, located between Iraq and Saudi Arabia, is known for its large oil reserves. Although Kuwait was one of the world’s poorest countries 100 years ago, thanks to oil, it is now a modern Arabic country, comparable to other Persian Gulf countries. During the winter, there is pleasant and warm weather, and there is almost zero criminality. If you are interested in what to do in Kuwait, read on.

Kuwait is one country that hasn’t developed tourism, yet there are more foreigners than Kuwaiti. There are many people from Europe or North America who work in big oil companies or work as doctors, bankers, etc. There are also many Asians, such as Pakistanis, Indians, Vietnamese, and Filipinos, all of whom are providing regular services and working in oil refineries. If you go to Kuwait, you will merge with the crowd. 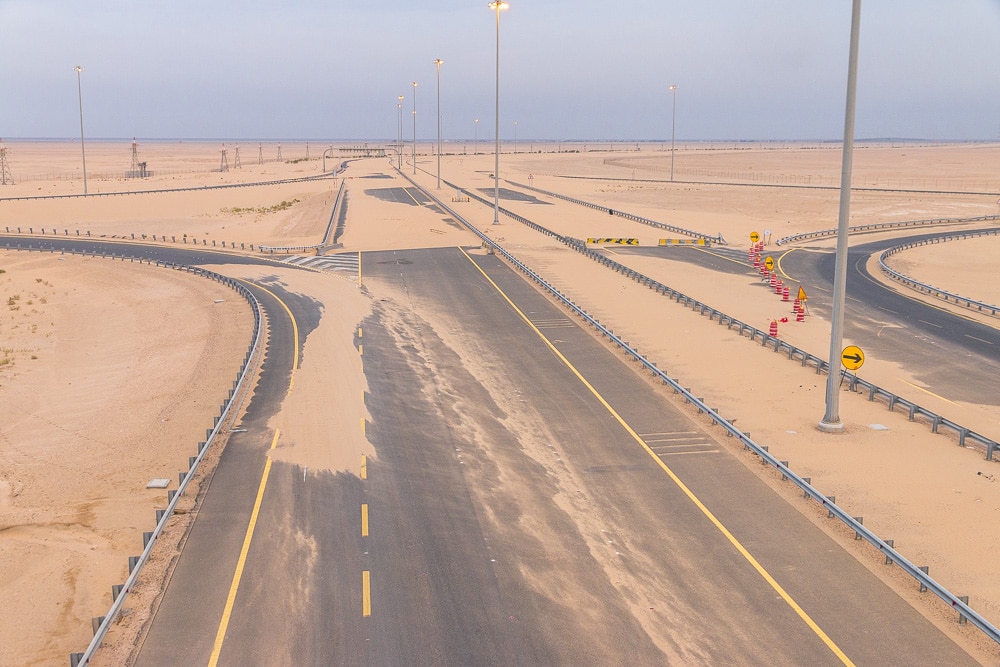 The Kuwait City is an oasis in the desert

At present, Kuwait seeks to attract many more tourists. That is why new museums, giant Art Center and new hotels are being built here. However, it is still rare in Kuwait to see a tourist, and the locals are very curious about every traveller. Kuwaiti are warm and hospitable, so we recommend going to the market for tea, coffee or hookah and exchanging a couple of words with local people. Due to the traffic situation in the city, we recommend that everyone rent a car. Urban public transport isn’t reliable in Kuwait. Before you go, you will need some useful information about accommodation, transport and clothing. You will find everything essential in our next article, which will prepare you for a journey through Kuwait.

You may be wondering what to do in Kuwait. You will be pleasantly surprised because this country offers its visitors a lot of interesting things to see.

The most interesting places in Kuwait include the Grand Mosque. The main mosque was inaugurated in 1987 and is currently the 7th largest mosque in the world. The mosque itself currently adjoins other buildings, such as a huge library of Arabic literature. From the outside, the Grand Mosque isn’t spectacular and only one minaret is decorated. However, if you walk in, you will be surprised by the splendid interior. The whole area is enormous, beautifully decorated and the ceiling, including the giant dome, holds only on four massive columns. The ceiling is richly decorated and symbolizes an enormous sun. 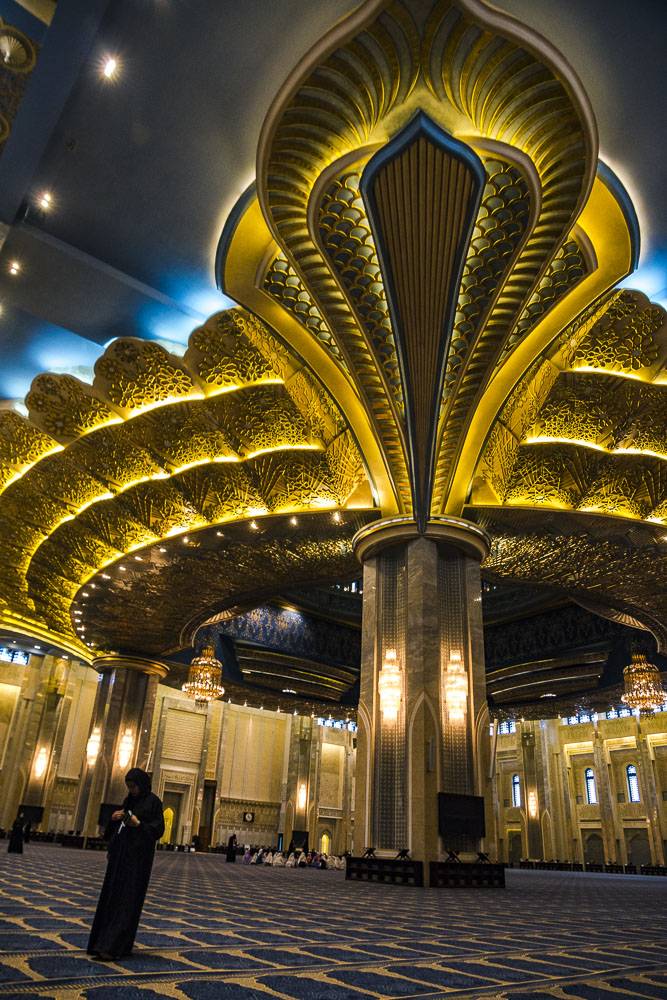 The interior of the mosque is really beautiful 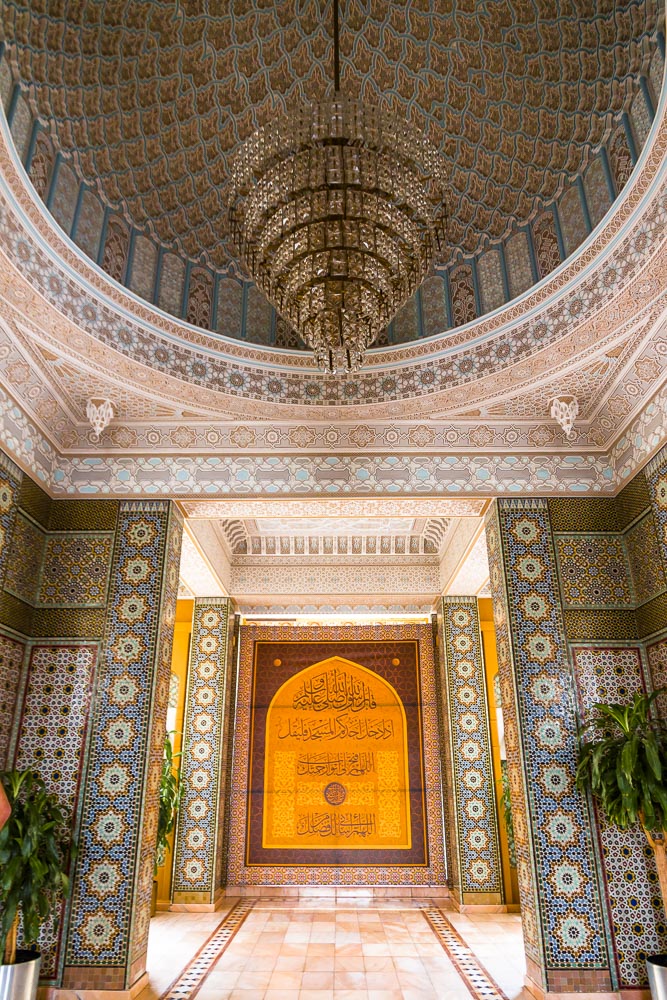 Do not miss the visit to the mosque

The mosque is open every day except Fridays, and you can visit it in a free guided tour that speaks perfect English. The visit takes about 1.5 hours and guides you to other parts of the mosque, including VIP space. The entrance to the holy ground of the mosque is governed by certain rules that need to be respected. Men cannot wear shorts, and they must cover their legs with a given skirt. Women, without exception, must have an abaya – a typical black garment covering their whole body and hair. There is an underground car park available for several hundred cars for parking at the mosque. Don’t park on the street because we almost had our car towed away. Visiting the Grand Mosque is one of the best things to do in Kuwait.

In Kuwait, we tried to find accommodation that would meet our expectations: cheap price and high quality. We can recommend this hotel. Even if it is a bit far from the centre, you can get there by car. This makes the hotel’s price a little lower, which we warmly welcomed.

Muzeum Tereq Rajab focuses on Islamic calligraphy and art. Currently, it has over 30,000 exhibits in its collections. Despite its size, it‘s one of the smaller museums in Kuwait, but it has great importance. Not only because of the large number of exhibits but also because of collections such as silver or gold jewellery. The entire museum is, in fact, a private collection of Kuwaiti Minister Tareq Sayed Rajab and his wife, Jehan Wellborne, and has only been open to the public since 1980. 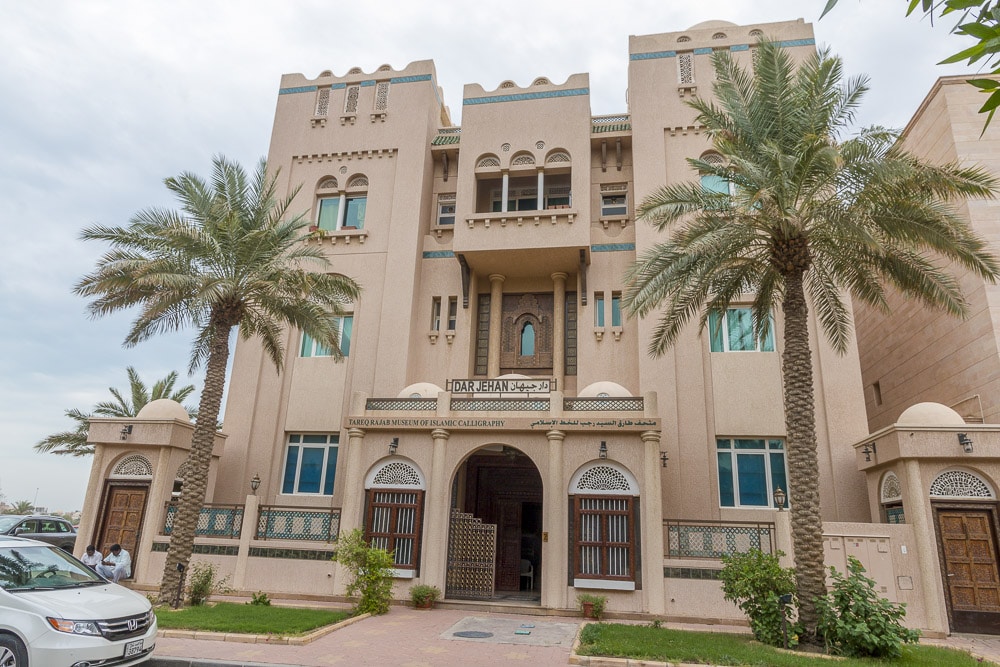 A visit to the museum is a very interesting cultural event

If you think of which museum to visit in Kuwait, then you certainly won’t omit Tareq Rajab. The museum is divided into two parts. In building A you will find calligraphy, manuscripts, miniatures, ceramics, glass, wood and stone carvings. In building B, there are objects that have been produced in the Islamic world over the last 250 years – costumes, textiles, jewellery, or musical instruments. Both buildings are about 150 metres apart and can be visited daily, except on Fridays, the opening hours are shortened.

Among the most interesting places to visit in Kuwait are the Kuwait Towers. It is probably the most famous tourist attraction in Kuwait. These 187 metres high towers offer the best view of the entire city of Kuwait. Here you can find a restaurant, a café and, of course, a panoramic terrace. The entrance fee depends on when you want to visit the towers and where exactly you want to go. You can go for breakfast or dinner, or just for a viewing platform.

The view from the Kuwait Towers is worth it

In our opinion, it is most interesting to visit the Kuwait Towers in the evening when it is easy to see the size of the entire Kuwait agglomeration. You will see the lights of buildings stretching along the coast, as far as your eyes can see. You will be able to enjoy the beautifully lit skyscrapers, but don’t expect to have nice photos here. The viewing platform is glazed, and the glass is dusty with desert sand. For night photos, it’s even worse, as all the inside lights are reflected in the glass.

Visit the House of Mirrors

As the name suggests, it is a house full of mirrors, or better, mosaics made up of pieces of mirror. Each room of this stunning house tells its own story. Anyway, the most interesting story is the tale of the house. This museum is a private artwork of the Italian artist Lidia Al-Qattan and her husband Khalifa. 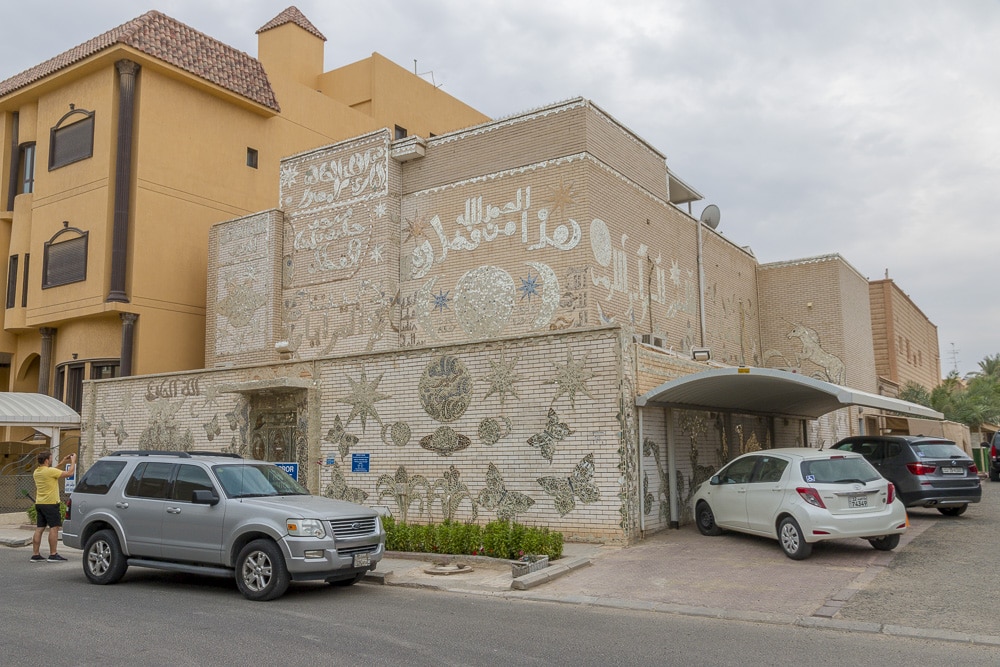 Daily guided tours and expect Lidia to take you personally around the house, offering you tea and homemade biscuits. She likes to talk to you, so prepare for a long visit.

The largest market in Souk Al-Mubarakiya

When planning what to do in Kuwait, don´t miss a visit to the Souk Al-Mubarakiya Market, which is the centre of everything at any time of day. The entire market consists of several interconnected parts divided by the range of goods sold here. In one part you will find exchange offices, others sell perfumes, clothes, fruits and vegetables, meat, fish, etc. Of course, you will find typical restaurants or cafes, where we recommend sitting with strong Arabic tea with a shisha. 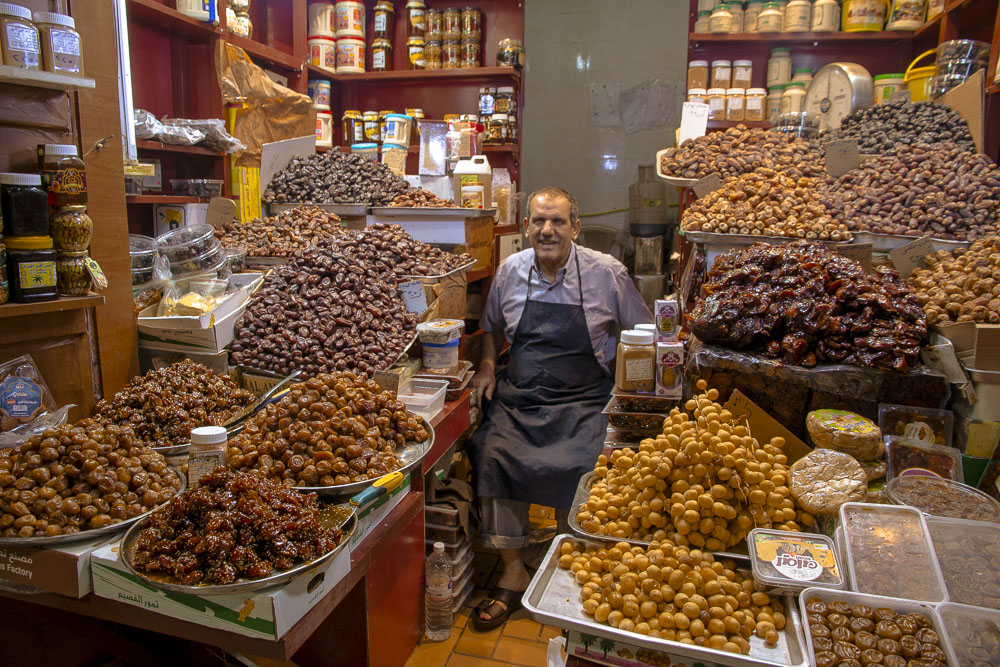 You will find almost everything in market Kuwait

Due to the tropical climate and sandy coastline, there are many beaches. Yet most of them, at least in the vicinity of Kuwait’s centre, aren’t very nice. The most beautiful beaches in the city are part of the hotel complexes. Of the few open to the public, we liked the beach in Al Kout, which lies just south of the city. The beaches around Green Island are also quite nice and while swimming you can admire the endlessly stretching city along the coast. 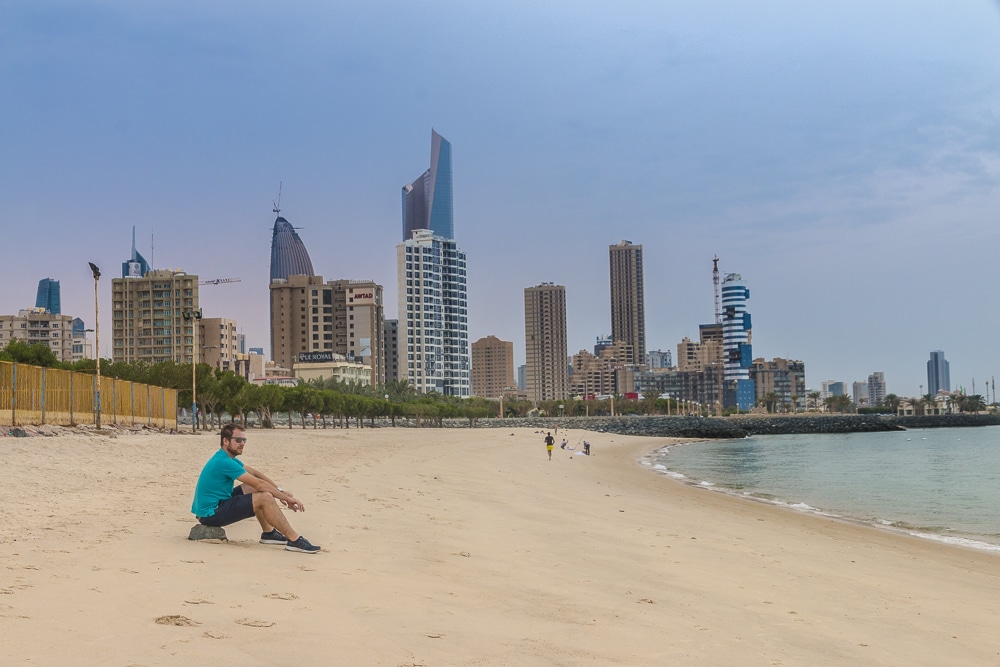 Visit the nearby island of Failaka

Failaka is certainly one of the other places to visit in Kuwait. It is a rather small island situated about 20 km east of the city, where several boats and ferries depart daily. The journey takes about 30 minutes to an hour depending on which ship you choose.

When planning what to do in Kuwait, don´t miss a visit to the Souk Al-Mubarakiya Market, which is the centre of everything at any time of day. Several thousand people lived here before the war, but after the war, many people didn’t return. One reason is the existence of a military base that occupies a large part of the island. Currently, only a few dozen inhabitants live on the island. That is why plans were made for a complete transformation of the island into a tourist centre, but unfortunately, they were interrupted by the crisis in 2009.

There are still remnants of war weapons on the island

What to do in Kuwait on Failaka Island? For tourists there is a small resort with a few rooms and one restaurant; otherwise, the rest of the island is in the same condition as it remained after the war. You will find partly shattered buildings, rusty tanks, wrecks and other military stuff. You can also see the recently discovered remnants of ancient civilizations from Mesopotamia to the reign of Alexander the Great.

A small park just outside the city centre is located in a busy city as an oasis of peace and greenery. It offers a visit to a small museum and a cosy café where you can gather your strength to explore Kuwait. In the park, you will see a lot of people walking under the green trees, running or just sitting on the benches. The entire park offers beautiful views of the skyscrapers of the modern centre of Kuwait. Part of the park is a small pond where you can see the fountain shining in all colours in day and night. In addition, various modern sculptures are also deployed. 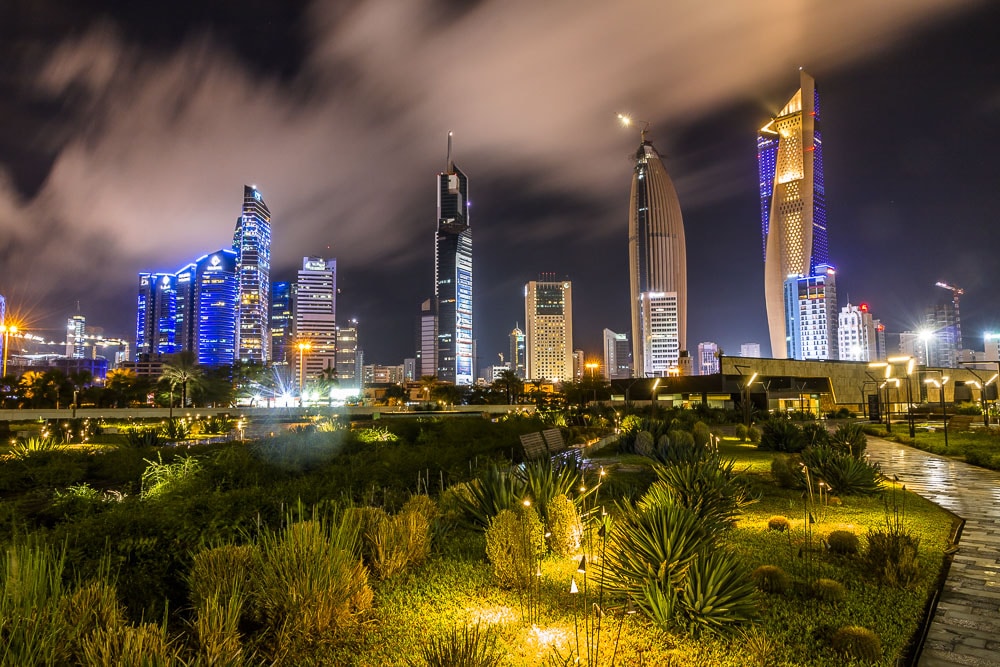 In Kuwait you can take very interesting night photos

Any visitor to Kuwait should not miss Al Shaheed Park. We’ve been here twice, day and night, and if you like taking night shots, you probably won’t find a better place. Under a large part of the park there is a free car park so don´t worry about looking for a parking space.

Are you going to visit Kuwait? What interests you in this country which hasn’t yet been discovered by tourists? Let us know in the comments!

READ NEXT: 7 Reasons to Fall in Love with Oman 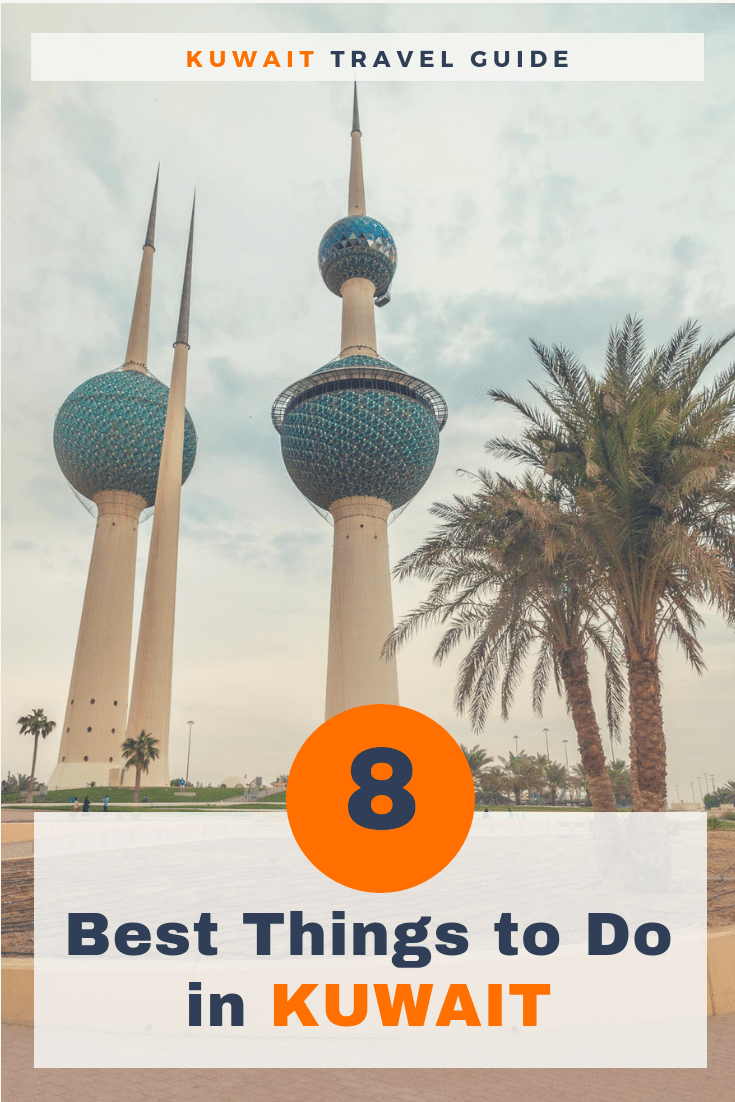