Things to know before traveling to Uzbekistan

Things to know before traveling to Uzbekistan

Uzbekistan is one of the most interesting countries in Central Asia. It combinates an interesting long history and beautiful monuments. It’s a perfectly ideal destination for any traveler because it is safe and inexpensive. We wrote all the information you will need to plan your trip and to ease your stay in Uzbekistan.

Uzbekistan has a very long interesting history, full of wars and struggles for power, but also of prosperity and peace. The Uzbekistan cities that used to stand directly on the Silk Road prospered and flourished thanks to the exchange trade.  Especially the gorgeous Samarkand, which was even the capital city in the 14th century. Other cities like Bukhara or Chiva, which are truly breathtaking and full of magnificent monuments, give us insight into the past riches of this area. 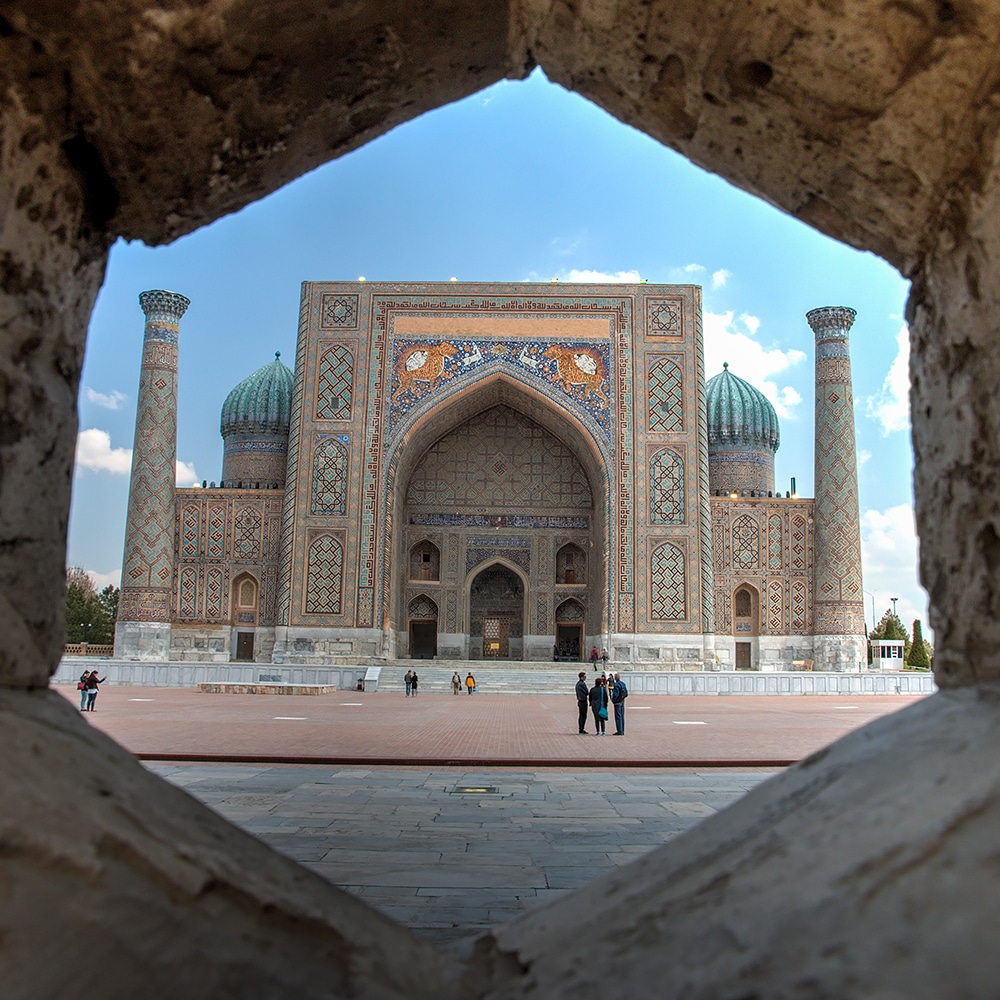 Uzbekistan is particularly remarkable due to its monuments

Uzbekistan also has its heroes and one of them is the famous conqueror Timur, whose portraits you might see in many places. Uzbeks see that during his reign he conquered vast territories and became a great warrior. Historians recall him more of a bloody or even genocidal murderer, who left almost nothing alive during his raids. Another important figure was Timur’s grandson Ulugh Beg. He had a completely different strategy. His name became synonymous with science and education in Uzbekistan. He built universities and mosques and gathered scientists from all over the world. 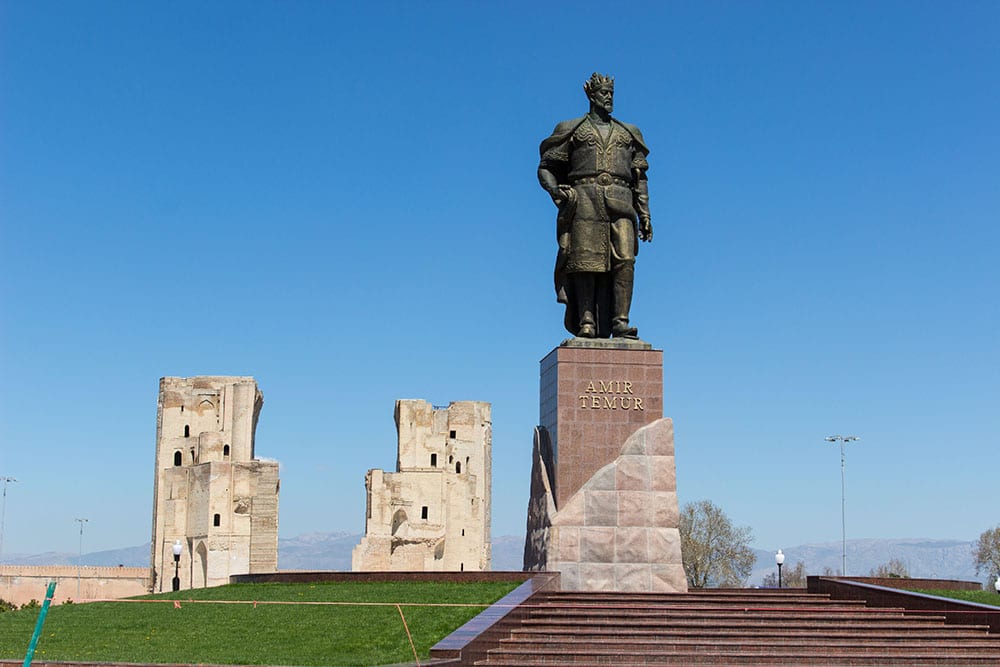 Timura loves the country and often portrays him

During the 20th century, Uzbekistan became a part of the Soviet Union. The regime is still perceived as authoritarian, there is now a gradual democratization on the rise. Yet Uzbekistan is still very poor, as one of the post-Soviet republics, although the conditions are slowly improving.

What Uzbekistan can offer

Most of Uzbekistan’s territory is covered by deserts. The largest among them is the Red Desert Kyzyl-Kum. Also worth mentioning is the nature reserve Samis, which is famous for its rock drawings. People who had traveled there from the Bronze Age to the Middle Ages made it. Thousands of drawings depict mainly animals and humans.

The largest lake in Uzbekistan is Aydar-kul, which surpassed the drying Aral in size. For tourists, it is a wonderful place to relax and take a bath in the clear water. Unique animal species that you won’t find anywhere else live here. The town of Moynaq, located on the shores of Lake Aral, offers a unique visit to see a ship graveyard. The town had once been a prosperous harbor before the lake began to dry out and the fishermen had gradually faded from here. 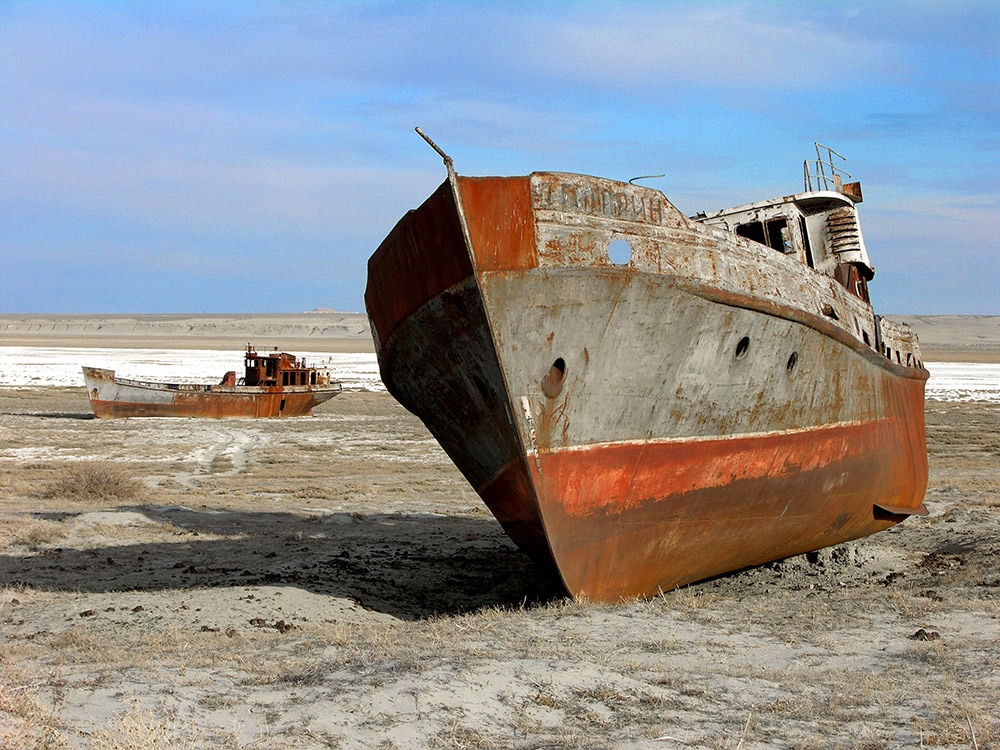 After the deserted Aral Lake, there were plenty of old boats

lake Aral lies on the North of Uzbekistan. It’s unreal how fast the lake is drying out. Once, there were two Asian rivers flowing into the lake – Amudarja and Syrdarja – that had been feeding the lake for thousands of years. When a monstrous cotton-growing project in the desert was launched in 1954, both of these rivers were diverted for irrigation purposes. The water level in the lake began to fall very quickly. By 2003, the lake lost 80% of its volume. Nowadays, the lake is becoming a huge desert and its salinity is so high that it has destroyed all the life that had been in the area. With the water levels so low, the rivers are now no longer able to replenish the lake, so Aral slowly becomes one of the greatest ecological disasters in modern history.

Anyway the main reason why to visit Uzbekistan isn’t the natural beauty, but the cultural heritage of the cities on the Silk Road. One such city is Samarkand, which is particularly unique in terms of its position and trade purpose it held in the past. The city offers beautiful and well-preserved monuments that are unparalleled in the world. Find out more about Samarkand in our ultimate travel guide. About an hour’s drive from Samarkand is Timur’s hometown of Shakhrisabz. Timur has a monument built there and there are also several important sights. 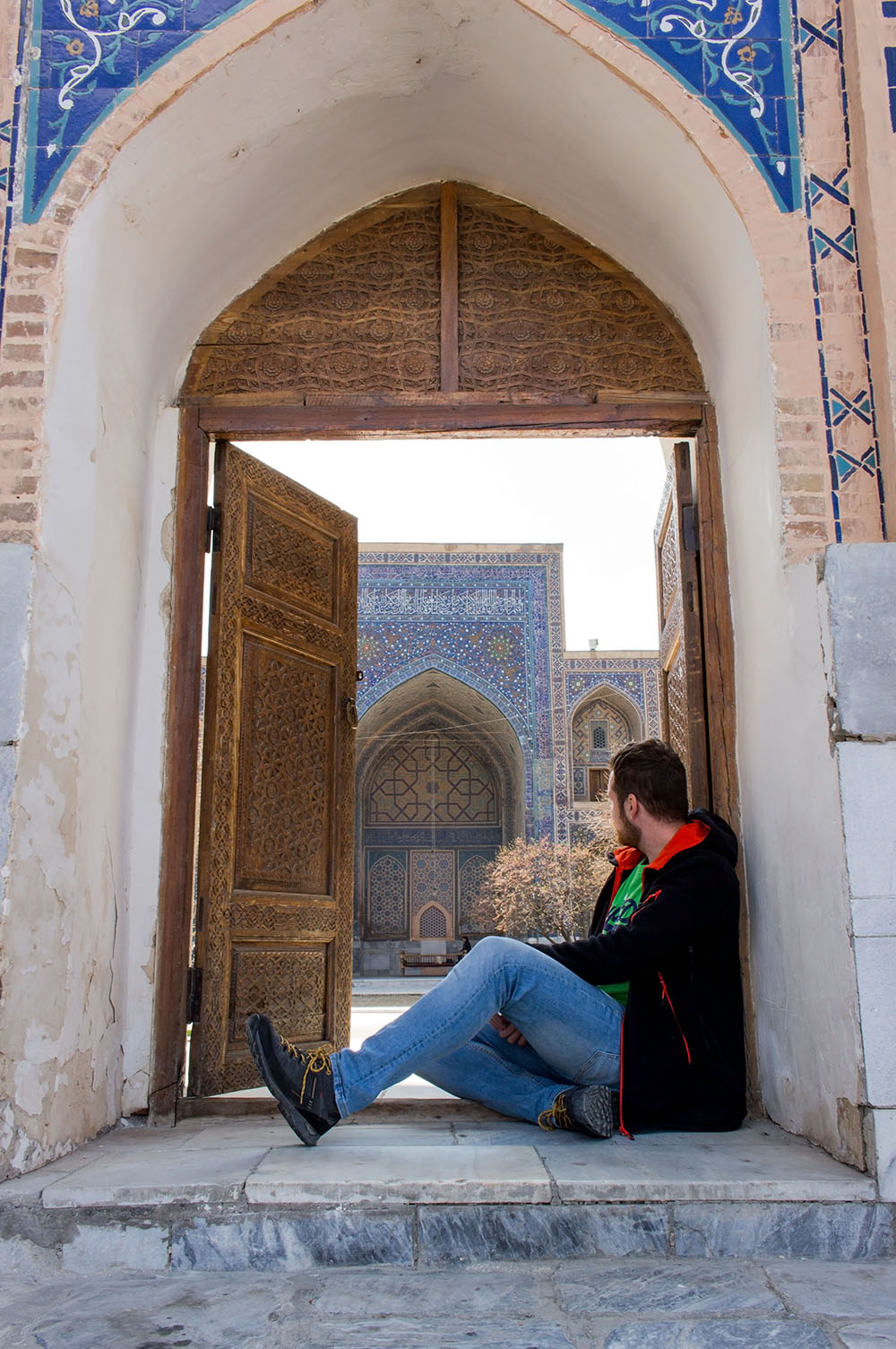 Square in Samarkand is truly magical

Bukhara and the city of Chiva aren’t less interesting. Find out what sights you can find in the Bukhara oasis that formed directly in the desert. Despite the complicated historical events, the current capital is the modern Tashkent. The raids of nearby enemies and frequent earthquakes had damaged most of the monuments there. The few well-preserved buildings that stand there today are being cared for with even greater care than anywhere else.

How to travel around Uzbekistan

The fastest and most efficient way of transport in Uzbekistan is by train. A few years ago, the government of Uzbekistan invested a lot of money into the railway infrastructure, which resulted in the Afrosiyob high-speed trains, which run at a speed of up to 250 km/h.

In Uzbekistan, you will find 3 basic types of trains:

Afrosiyob – the aforementioned high-speed trains run between Tashkent – Samarkand – Navoi – Bukhara. A ride on this train is a great experience mainly for tourists and wealthy Uzbeks. The train itself is much more comfortable than a regular train.

Sharq – regular trains that more locals use for transport. These trains run on the Tashkent – Samarkand – Navoi – Bukhara route.

Ozbekiston – there are also regular trains and you can find them on the Tashkent – Kokand – Margilan – Andijan route. 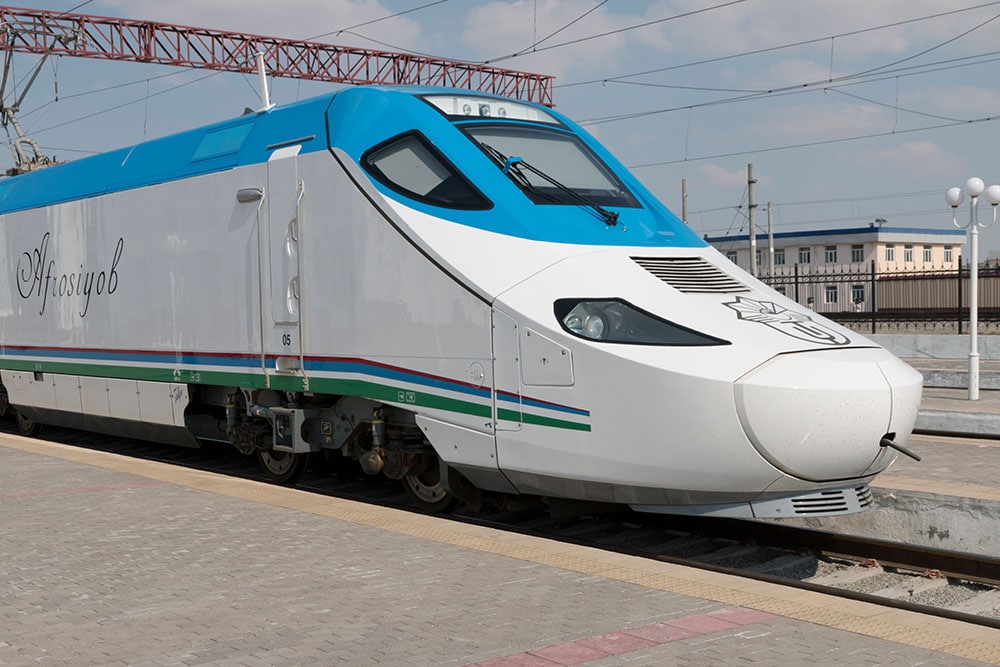 Afrosiyob Bullet-Trains are the ideal way to travel between cities

You can purchase a train ticket with a passport and only at the train station. Some hotels offer to buy the tickets for their guests for a small fee. However to do so, they need to borrow your passport. When we booked hostel in Tashkent (Topchan Hostel), we took their offer and send a copy of our passport and paid for train ticket in cash when we arrived. Still, buying your own tickets by yourself is the best and cheapest option, but it needs to be done well in advance. Train tickets are often sold out.

At Advantour.com, you will find the necessary information on trains, including timetables. This agency is said to be able to arrange train tickets for tourists, but unfortunately, no one answered us when we enquired to buy some train tickets.

Uzbekistan Airways is flying several times a day to most tourist destinations such as Samarkand, Bukhara or Chiva from the Tashkent. One-way flights typically start at $50. 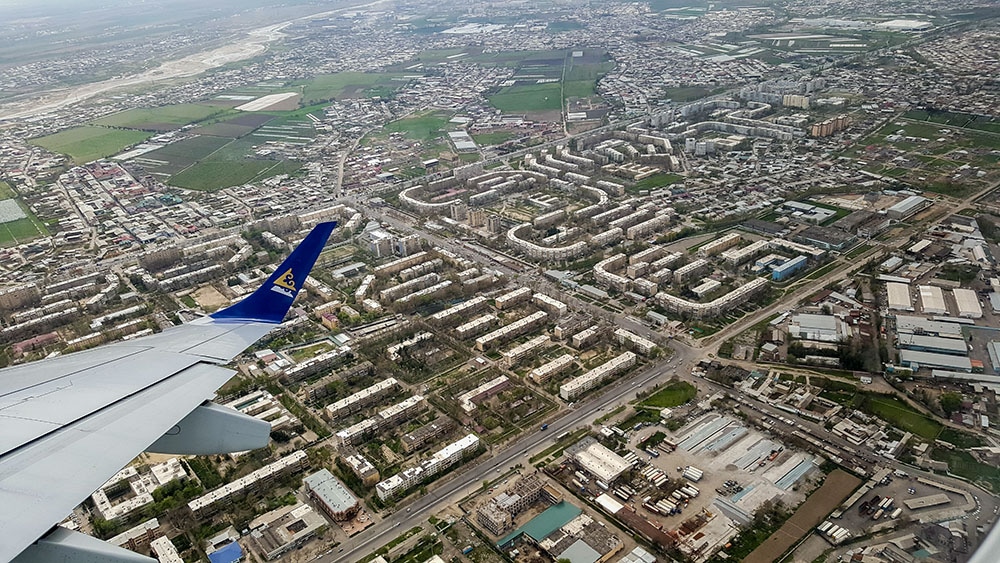 In addition to airplanes and trains, it is also possible to rent your own car in Uzbekistan, but there is no large international car rental operating in Uzbekistan. Taxi drivers are as unpopular among tourists as they are in other countries. You might even encounter a shared taxi – the driver waits for the car to fill up and only then does he set off. For tourists, the prices are usually much higher.

Rail stations and airports usually have many taxis waiting mainly for tourists and driving them at high prices. Their offer is often 10 times higher than the standard price. It takes a lot of bargaining and patience. If you decide on the final price before driving, consider that it may not be the final one. As soon as a taxi driver drops you off, he will argue that the price should be higher. To get rid of the drivers, you’ll still give them what they want, because the several bucks difference isn’t that much. It’s a technique that almost everyone there uses. Alternatively, it is also possible to call a taxi from the hotel for the more decent price.

There are almost no ATMs in Uzbekistan and not many banks. It’s indeed a very closed country. Every traveler should arrive with enough cash in USD. The official rate is very low and it’s necessary to exchange money on the black market. The UZS/USD exchange rate is striking and a few dollars will get thousands of Uzbekistan Soms. In every hotel, tourist shop, restaurant or even on the street, everyone will be more than happy to exchange money. Therefore, we recommend that you first become acquainted with the offered rates and don’t go right after the first offer. Uzbeks use mostly low banknotes, so you will need a plastic bag instead of a wallet to store all your money. 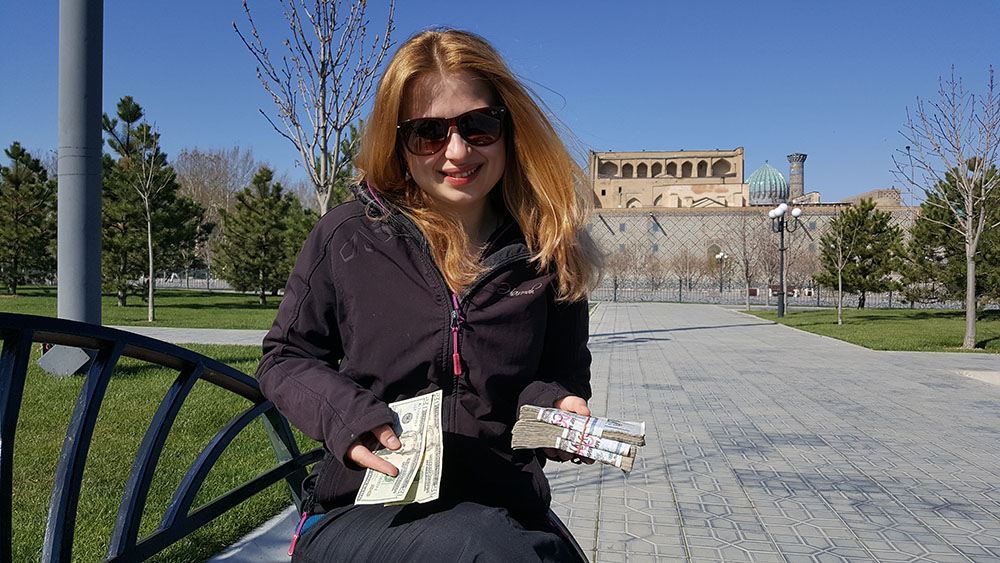 In exchange for $ 40, you will get a big pack of Uzbek Sums

Hotels or hostels can be booked in Uzbekistan via Booking.com or HotelsCombined.com. In each hotel, you will then receive a card with your arrival and departure date. Police officers may ask to see this document during a random check and it must be surrendered at the airport when leaving Uzbekistan. So keep it in mind and look carefully after your cards. 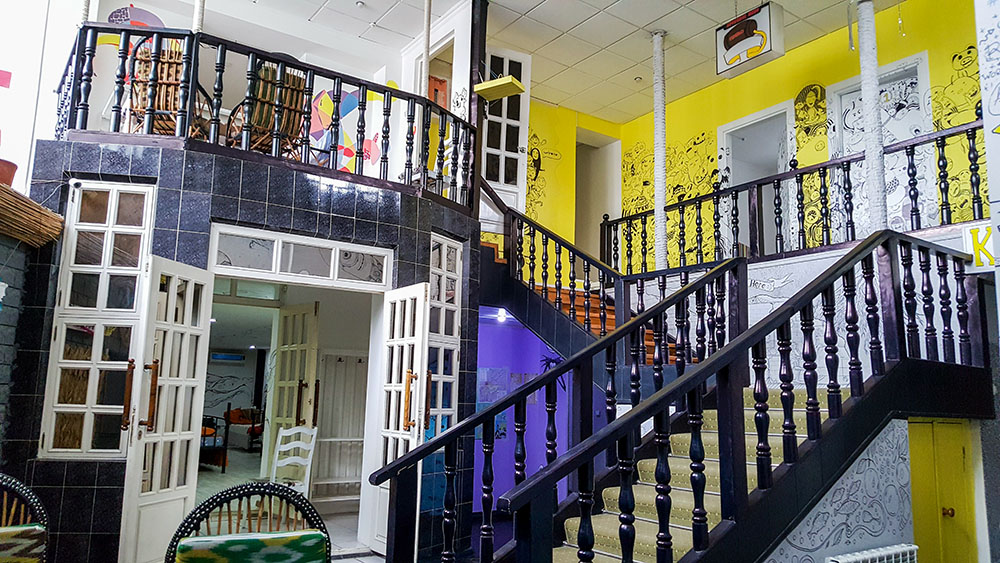 Accommodation in hostels is in Uzbekistan

The taste of Uzbekistan

Uzbekistan food is very specific and has been influenced by several world cuisines. There are elements of Persian, Kazakh and from the 19th century even Russian cuisine. Uzbeks eat mainly meat – lamb and beef. As proper Muslims, they don’t eat pork but you won’t find much chicken meat or fish either. The locals aren’t accustomed to eating side dishes so they usually have a flatbread and a vegetable salad with their meat. 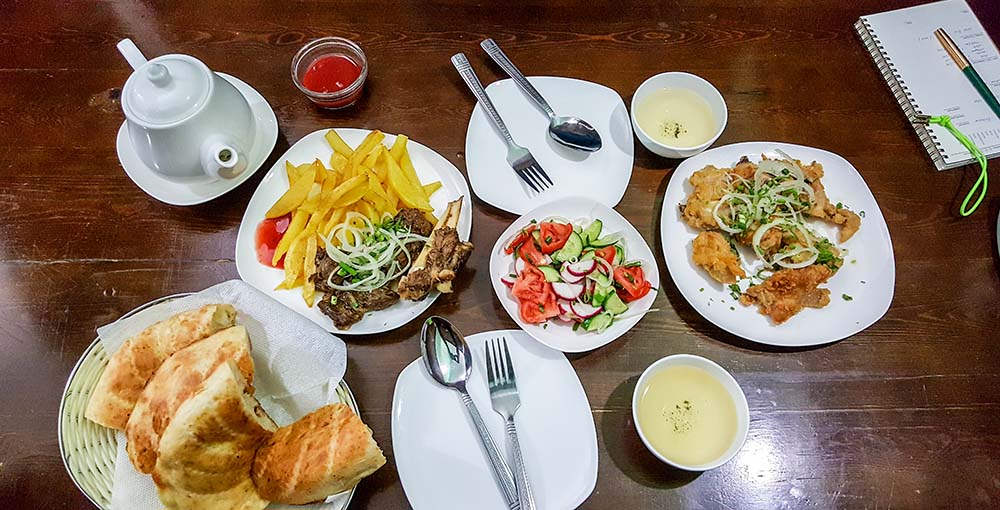 A typical Uzbek food, which is dominated by meat skewer – shashlik

A popular dish is Shashlik, which is basically skewed meat. Most often, the meat is roasted directly over the fire and then steamed. Shashliks are consumed together with flatbread and white onion slices. Another typical Uzbek meal is Plov. It’s a kind of a risotto with meat that can be flavored in several ways. The locals flavor this delicacy with for example almonds, raisins, saffron, vegetables or mushrooms. No less popular are Pirohy with a stuffing of chopped meat served with a delicious sauce. Also important are strong soups. The most popular is the onion soup with meat – Shurpa. 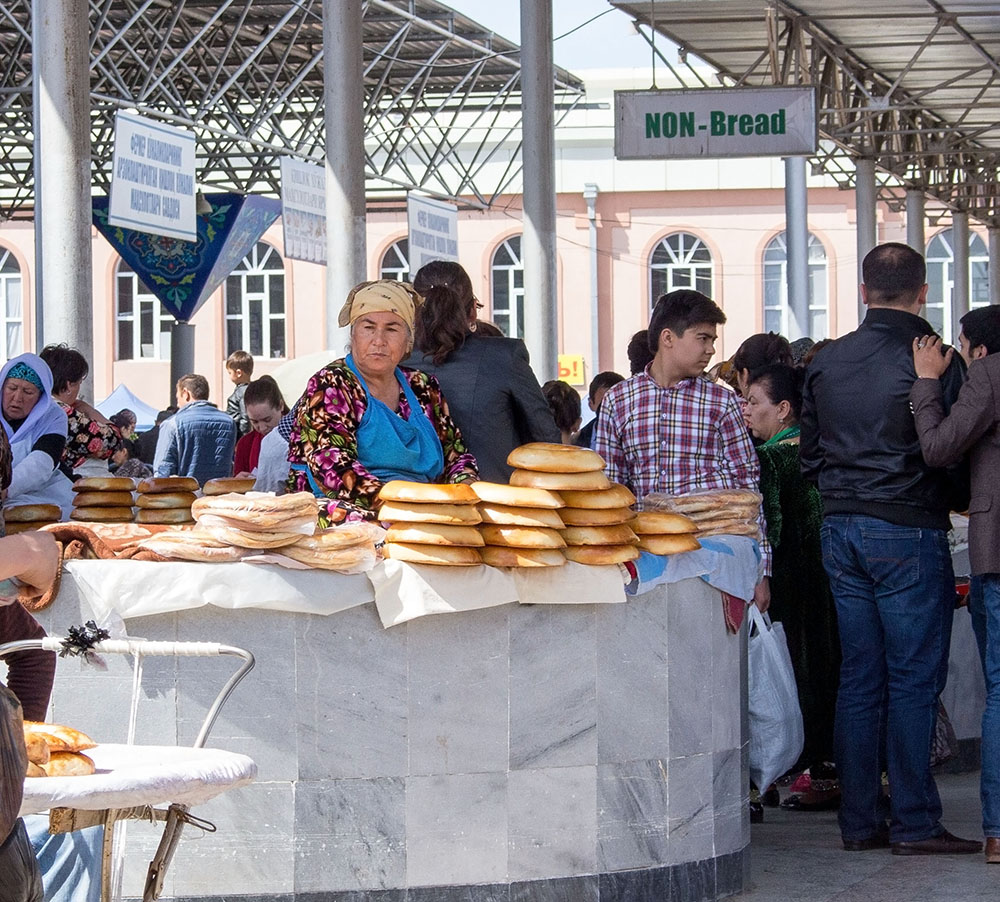 Uzbek bread has a great taste

For breakfast, the Uzbeks have the typical flatbread with jam and sweet rice. You can admire the beautiful porcelain on which all the specialties of their cuisine are served – this porcelain is very typical for Uzbekistan. If you’re planning to enjoy the local cuisine, be sure to strengthen yourself with good green or black tea. Uzbeks use high-quality loose tea, the right preparation of which is very ingenious.

Read Next: What to do in Almaty in Kazachstan 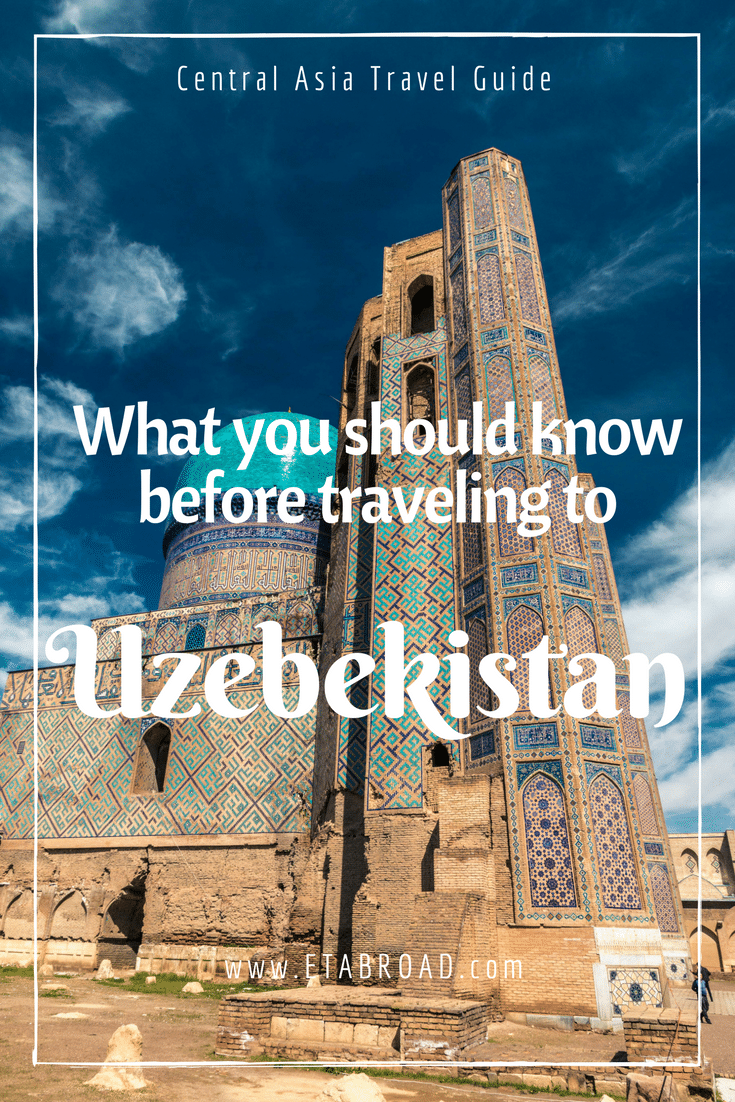