9 Best Activities on What to Do in Luxor in Egypt

9 Best Activities on What to Do in Luxor in Egypt

Egypt has a very long history and is one of the oldest surviving civilizations in the world. The area of this country is huge, and the most important monuments are located along the Nile. Roughly in the centre is the city of Luxor, which was the capital of Egypt in the New Empire. It was a religious centre of art and science but also a political influence in the days of the New Empire. If you’re interested in what to do in Luxor, read on.

When you think about what to do in Luxor, you must not miss the most important and best-preserved temples that the former city of Egyptian ancient civilization can offer you – the Karnak and Luxor temples. We recommend spending the whole day there because they are pretty big and very interesting.

A few guides will offer you their services in front of the Karnak Temple. We recommend using their services as we appreciated it very much. Karnak is the largest temple complex in Egypt, which has been gradually expanded and built over 1500 years. The entrance to the temple is lined with sphinxes with rams’ heads. Right after entering the temple, you can admire the ancient scaffolding at one of the pylons. Part of the complex is the largest column hall, which you will know from the Indiana Jones movie. 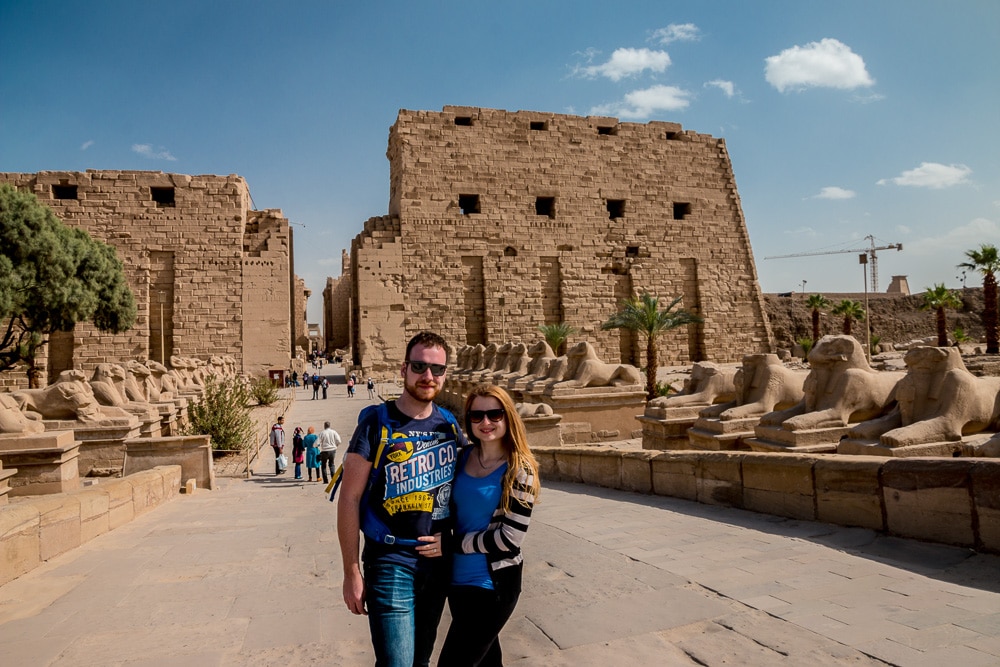 Eve & Tom in front of the Karnak temples complex

You will be able to admire the majestic statues in the Karnak temples, elaborated into the finest details or tall obelisks, towering into incredible heights. What is worth mentioning are the Christian paintings on Egyptian columns, located just outside the sacred pool. They are no longer so obvious now, but there is a visible attempt by the Coptic Church to Christianize the Egyptian population. The huge building blocks occupy the rest of the Karnak area, which is carefully mapped by archaeologists and probably re-assembled. When you get hungry from the intense walk and heat, visit the El Hussein Restaurant for Egyptian food, located close to Karnak. It’s a small Egyptian restaurant with a very kind owner; you can expect very good food and low prices. In general you don’t need big budget for Egypt. 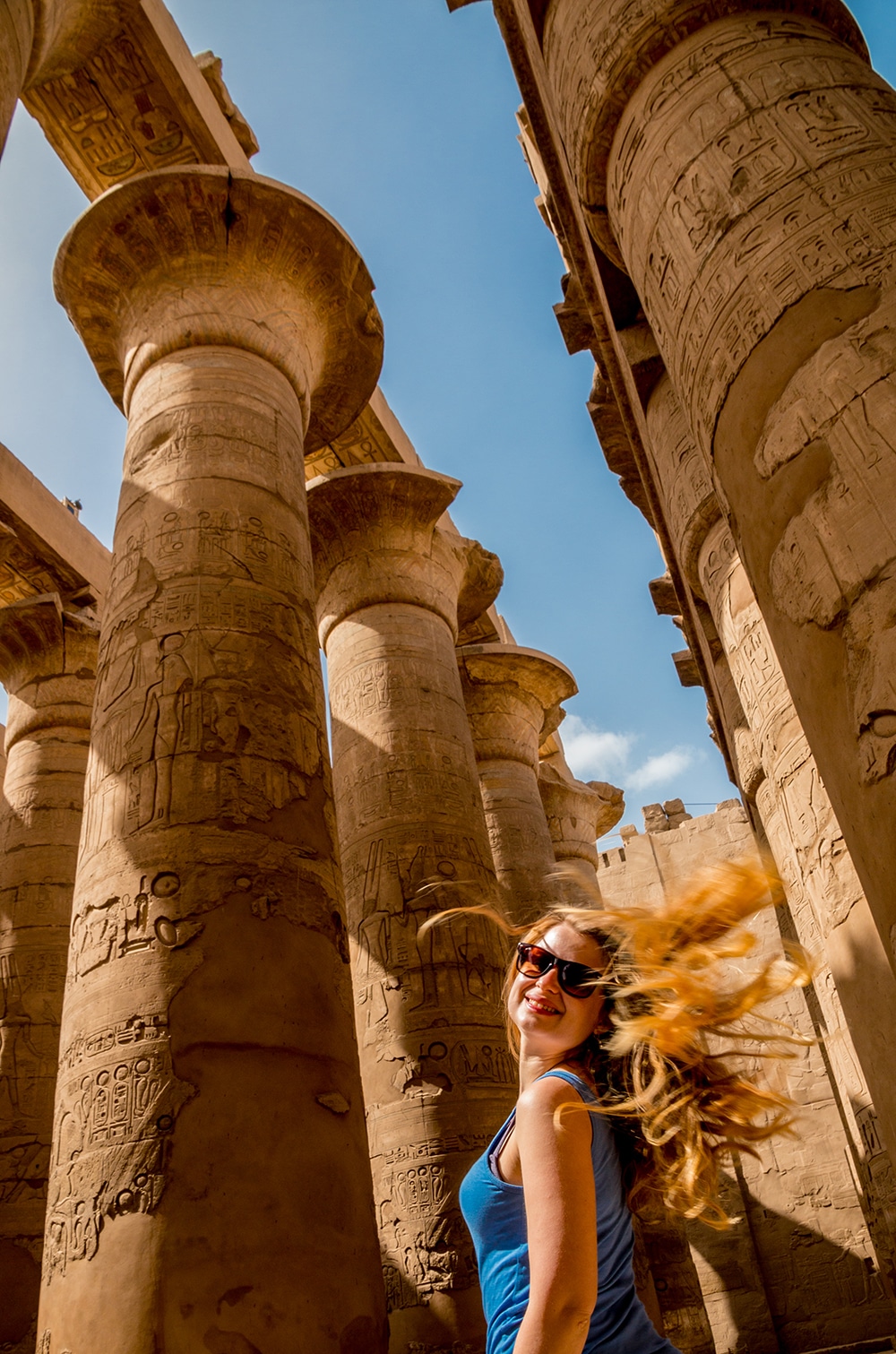 In the past, Karnak was linked with the Luxor Temple by a three-kilometre alley lined with dozens of sphinxes. Nowadays, archaeologists are trying to restore this path even if it is complicated by the current development. Luxor Temple will catch your eye at first sight with the giant statues of Ramesses II. The entrance gate with the sculptures was guarded by two tall obelisks; unfortunately, one currently located on The Place de la Concorde in Paris.

If you are thinking about how to travel around Luxor, there are several options to choose from. You can use taxis, horse-drawn carriages or rent a bike. We used a rented car at RentalCars. So, we avoided the constant haggling of prices and had much greater freedom to move around the city, possibly beyond. Read our thoughts why visit Egypt without tour. 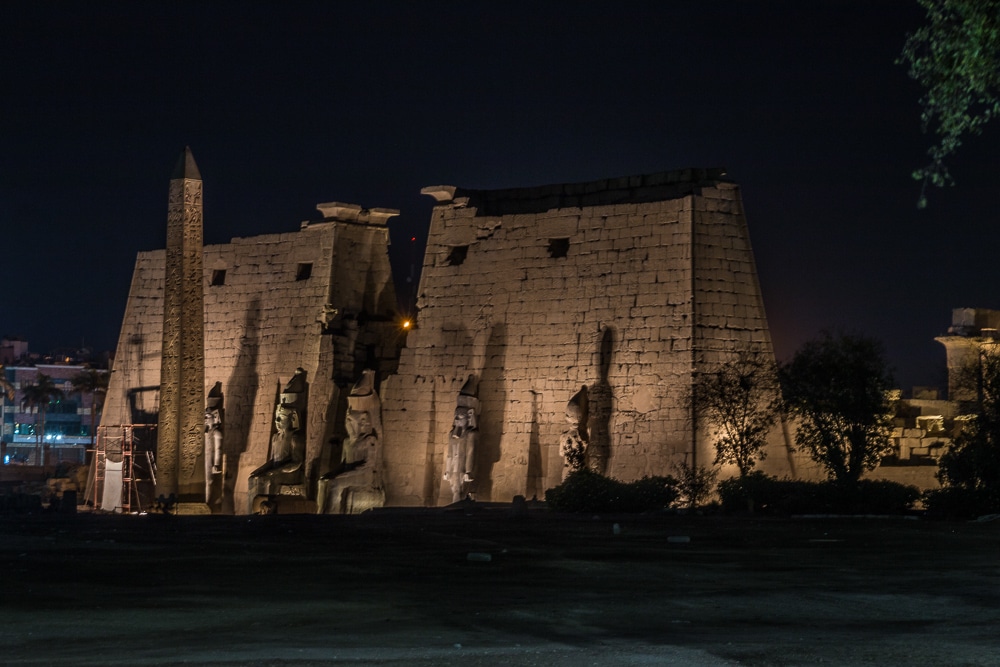 Grandeur Luxor Temple is outstanding even with night lighting

Right after you enter the temple, there is probably the greatest curiosity of this complex. It is a mosque, standing right at first court. Originally, there was a Coptic tabernacle that was rebuilt into a mosque after the conquest of the country by Arabia. Luxor offers a showcase of the wonderful sculptures of Ramesses II’s descendants, a pillar alley and many temples dedicated to various gods. There is a Christian chapel built here by the Romans in the 3rd century. The sides of one of the smaller temples were rejected and painted again with Christian scenes. You can even try to find the relief of Alexander the Great, located at the back of the temple. 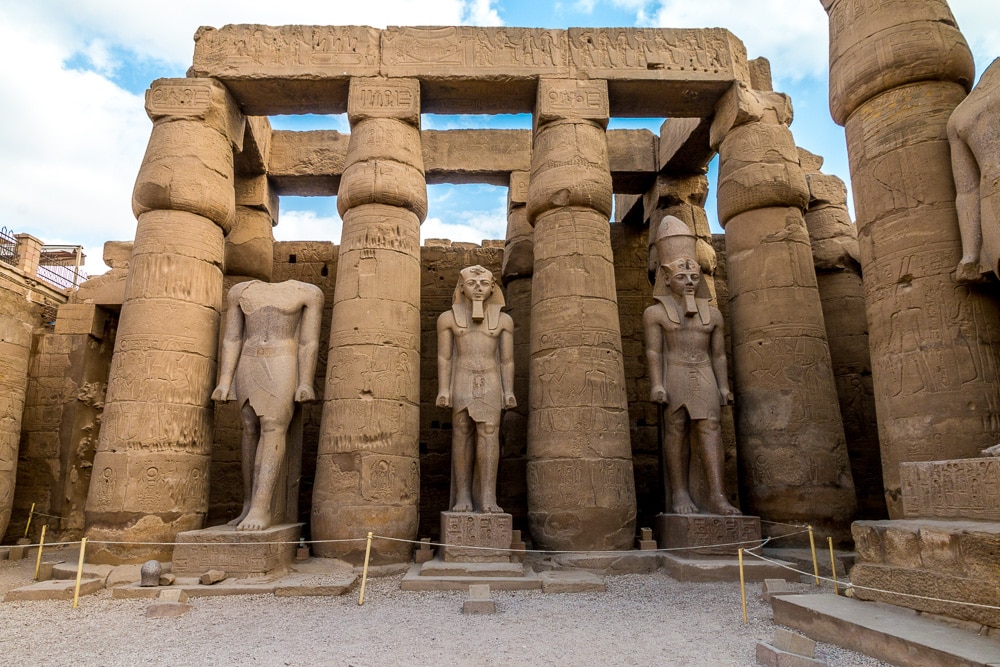 Valley of the Kings

The Valley of the Kings is a place which any visitor heading to Luxor shouldn’t miss. It is a unique Theban necropolis, located on the west bank of the Nile, which is unparalleled in the world. The Egyptians were obsessed with the afterlife, and their methods of burying and mummification were at a very high level. Nowadays, you can still see stunning paintings from Egyptian mythology and the life of the common people. Most of the crypts were equipped with items to facilitate the long journey of the afterlife and resurrection. Most of these treasures were either stolen or located in a museum anywhere in the world. In some crypts, there is still a huge sarcophagus that hides the mummified body. 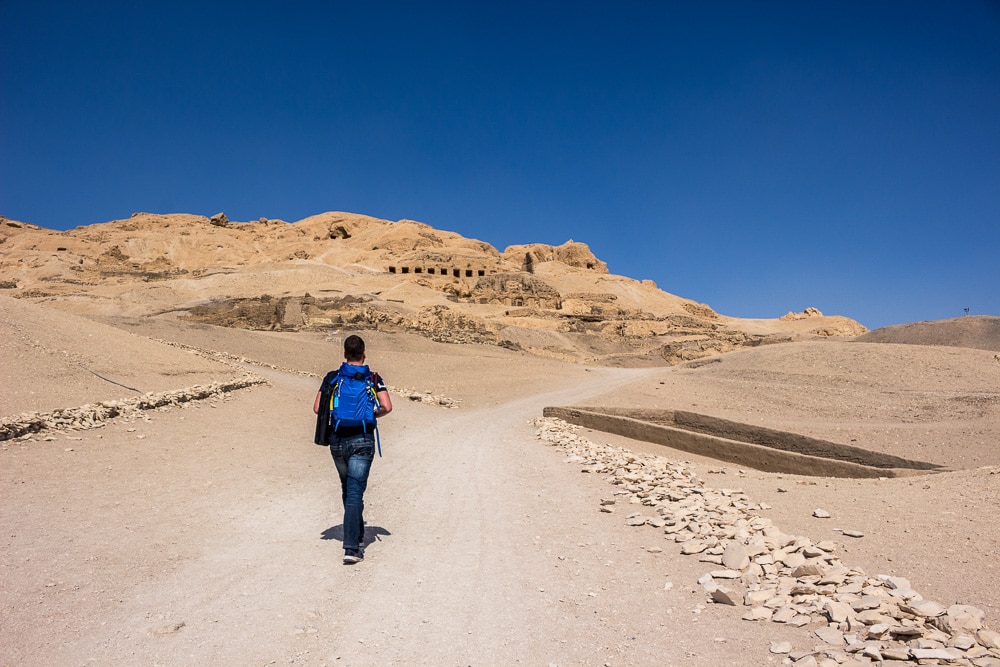 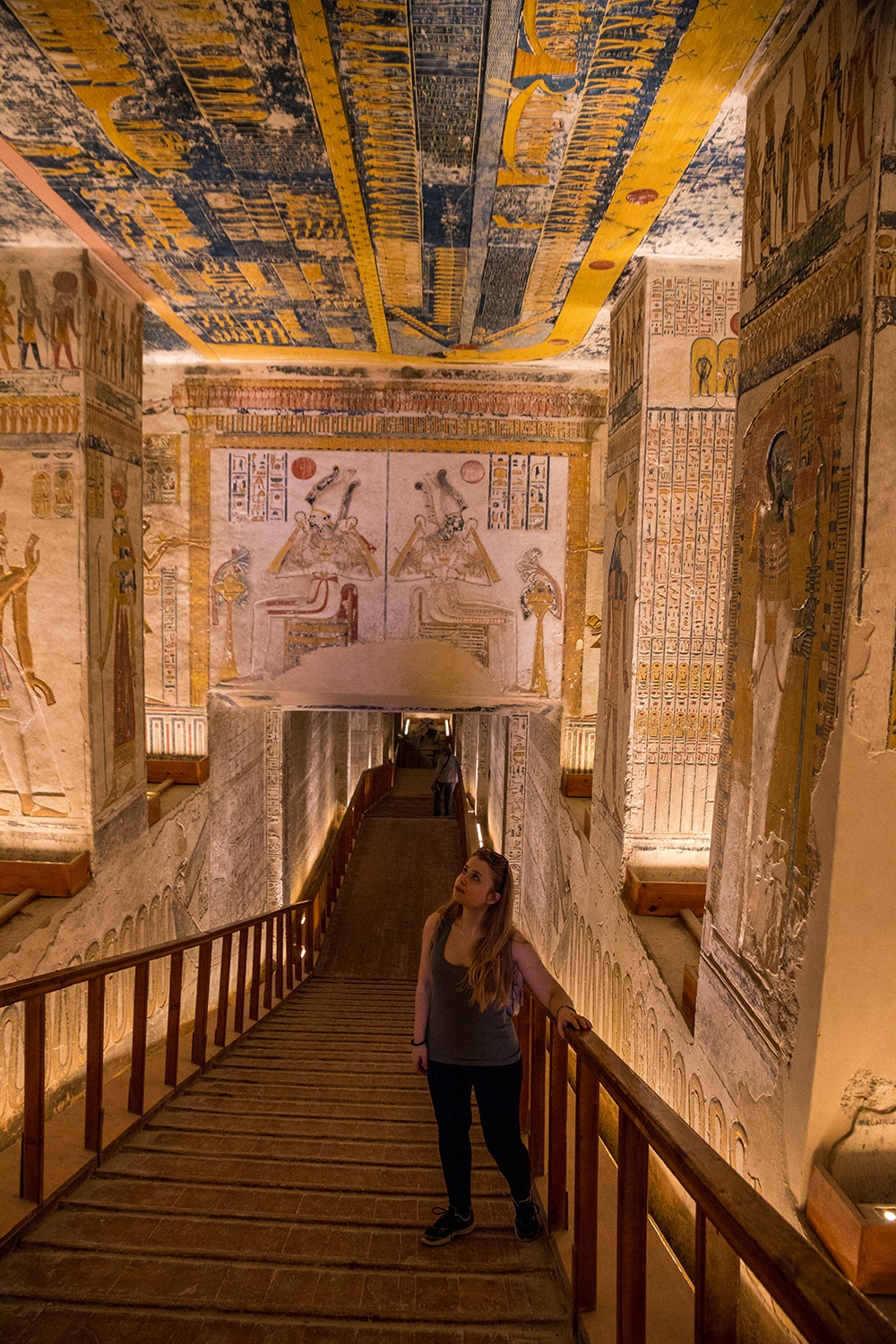 The tombs of the kings are decorated with beautiful reliefs

Balloon flight over Luxor at sunrise

A very popular activity for every Luxor visitor is a balloon flight over the West Bank. Demand is high, even though a few accidents have occurred here a few years ago. Since then, the security situation has moved significantly forward, so there is nothing to worry about. The pilots are perfectly trained, the wind is monitored carefully, and the flight is at relatively low altitude. And it’s an experience that is worth it. Set an early alarm; dawn is quite early in Egypt. You can admire the local landscape without tourists in the morning. You are going to have a short flight from the Valley of the Kings, admiring Queen Hatshepsut’s Mortuary Temple or Seti I Temple from above. 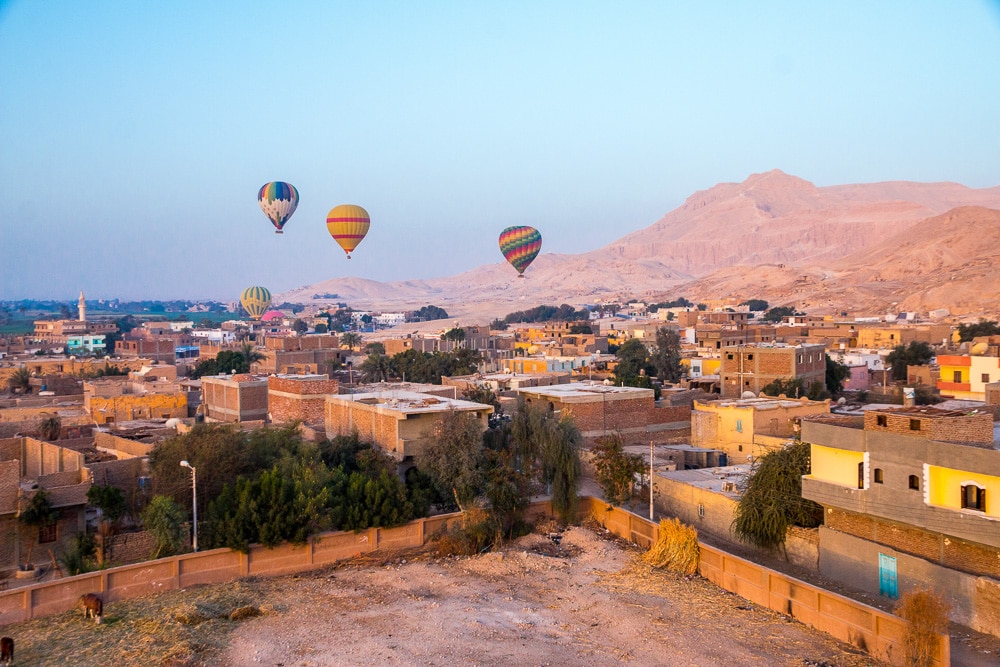 What to do in Luxor? Certainly, you must not miss the temple of the eminent Hatshepsut, who originally was the wife of King Thutmose II. When the monarch died prematurely, his son Thutmose III was supposed to be on the throne, but he was too young and unprepared, and Hatshepsut herself took over the government. During her reign, Egypt prospered, and Hatshepsut eventually ruled as Pharaoh. She dressed like a man, even pinning an artificial Pharaoh beard on the ceremony. To take advantage of her influence, she had a mortuary temple built on the west bank of the Nile opposite Karnak. 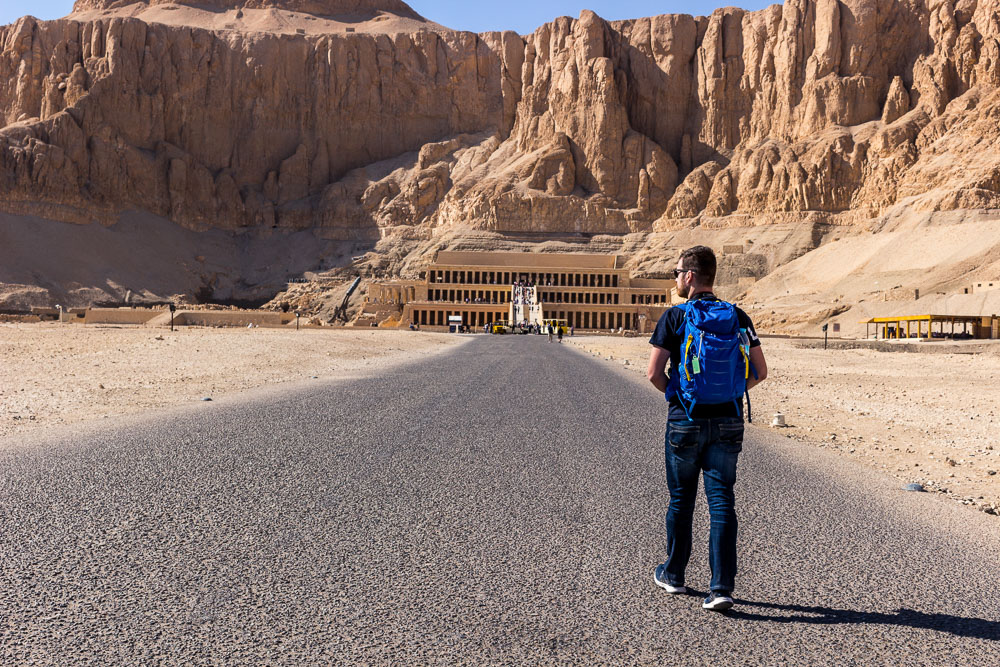 Hatshepsut Temple is an iconic building of all Egypt

This temple is close to the Valley of the Kings and is partly embedded in the rock. In the past, it was surrounded by a green grove; nowadays, there is an arid sandy landscape. The temple was found in very poor condition. What it looks like today is the years of work of archaeologists who have tried to restore it to its best and former glory. The monument is interesting, especially for its timelessness. The wide ramp connects the three high-rise terraces and, together with the columnar, makes an almost futuristic impression. Reliefs on the walls celebrate Hatshepsut’s achievements and give the royal immortal glory.

In front of the Valley of the Kings on the West Bank of the Nile, you can admire the magnificent Requiem Palace of Ramesses II, which is named Ramesseum. The building served the monarch’s worship even after his death. The complex included the Temple of Ramesses and other temples for the worship of his mother and wife, the large palace, the priests’ dwellings, the chapel and other farm buildings. The most preserved part is probably the palace itself, which is interesting, both with its reliefs from Ramesses’ life and huge statues.

Where to stay in Luxor? We would recommend the Aracan Eatabe Luxor Hotel. It offers a good price-quality ratio. The hotel is close to the centre too, so you won’t be too far away from the sights. You can also enjoy outdoor swimming pools, and if you are lucky, you will get a room with the Nile River view. 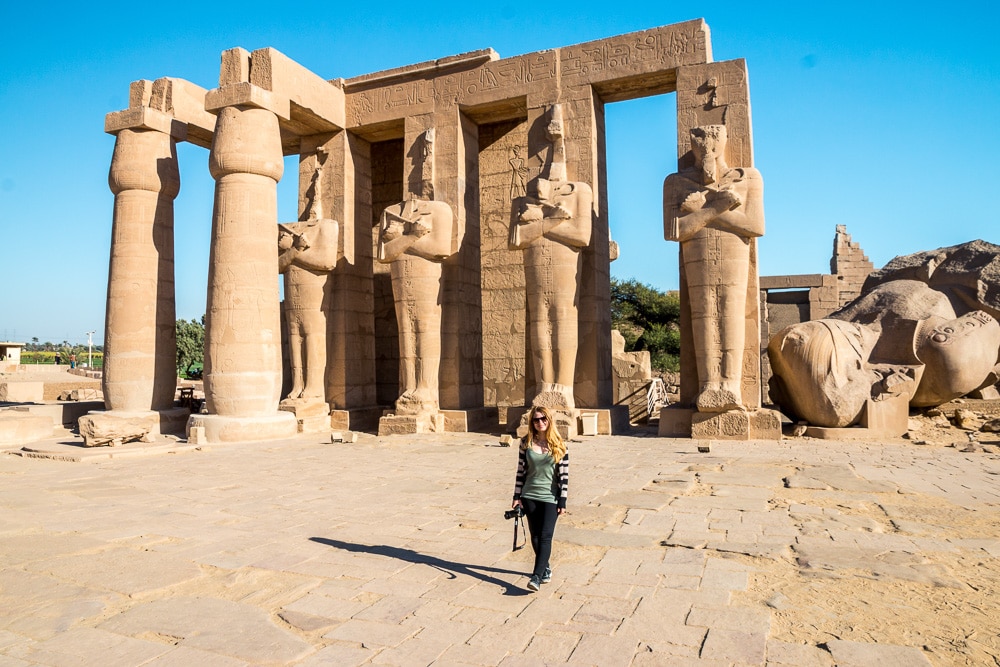 Palace of Ramesses II was enormous

Particularly noteworthy is Ramesses’s colossal sculpture, which was buried during the earthquake and still lies on the ground. It would be a respectable 17 meters in height. When the building stopped serving its purpose, it becomes a burial ground for priests and a suitable source of building material. Later, the complex was also used as a Coptic church as evidenced by archaeological findings. 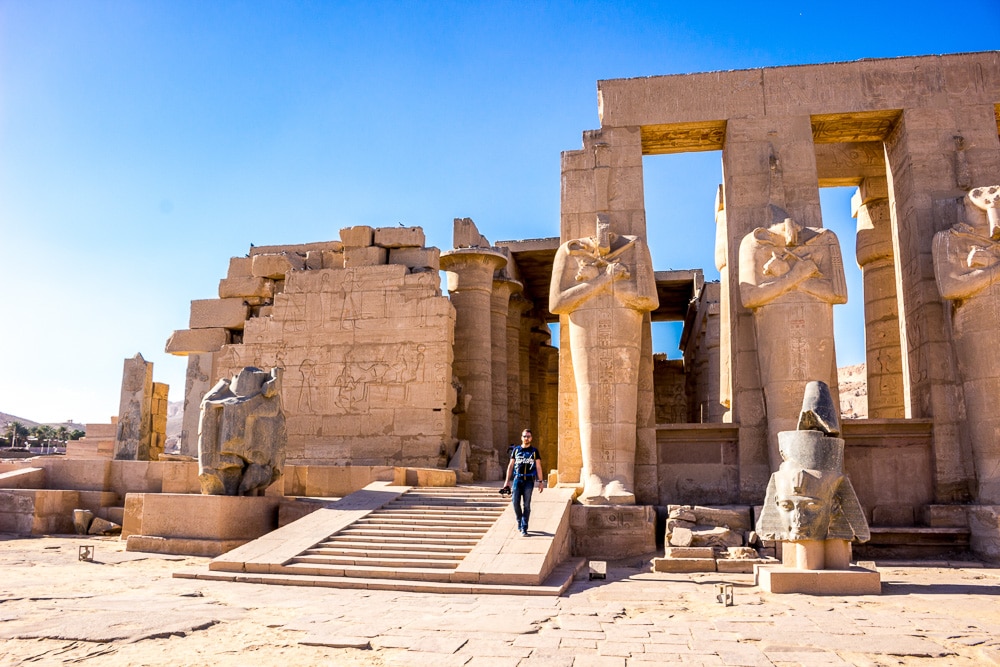 The palace served as the home of Pharaoh Ramesses II

What to do in Luxor in the evenings?

It would be a pity not to visit the Egyptian market and enjoy the oriental atmosphere of the place. You will find exotic spices, beautiful silk fabrics, incense sticks, painted papyrus or alabaster figures. Especially the alabaster workshops in Luxor can offer a lot, and the selection is truly stunning. Who wouldn’t also like to taste the local cuisine, which is typically Arabic? We can recommend a visit to the Al-Sahaby Lane restaurant, which is located right in the centre of Luxor in the middle of the night market and where we really enjoyed the meals or shisha. Also, worth mentioning is the Om Hashim Restaurant, which is more focused on locals, but it has excellent meals too. 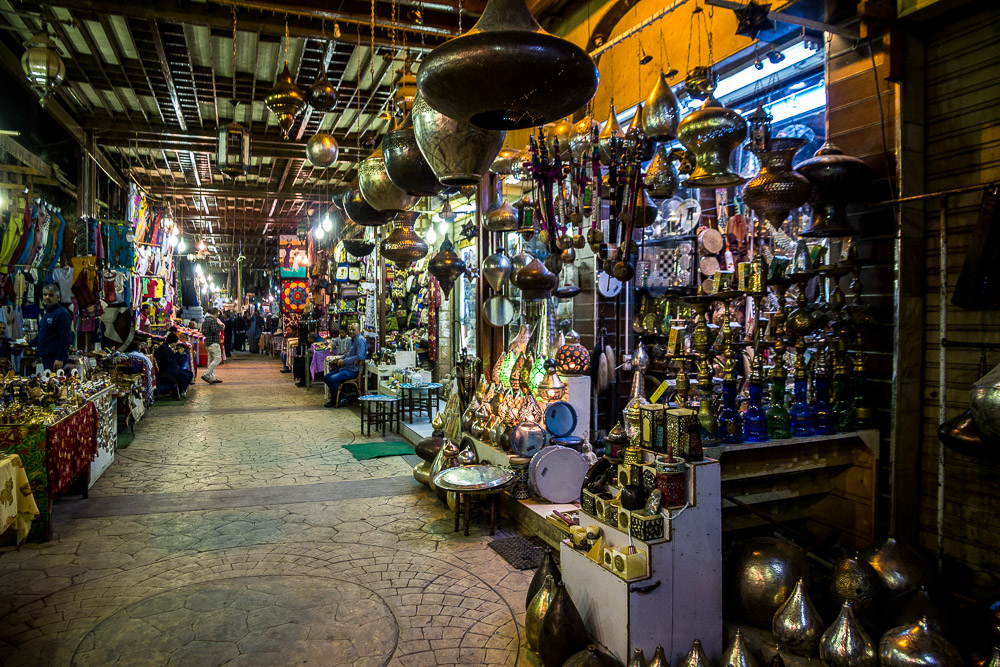 You can find almost everything at the Luxor market

The Mortuary Temple of Ramesses III is one of the best preserved in Egypt. When you think about what to do in Luxor, be sure to visit Medinet Habu. It is one of the few temples that have been completely dug out of the sand. Since the ceilings are partly preserved, tourists can admire the remains of paint on the preserved reliefs. Its name is derived from a prominent dignitary of Amenhotep, son of Hapi, who once had his own temple. Medinet Habu is a celebration of Ramesses III’s life. 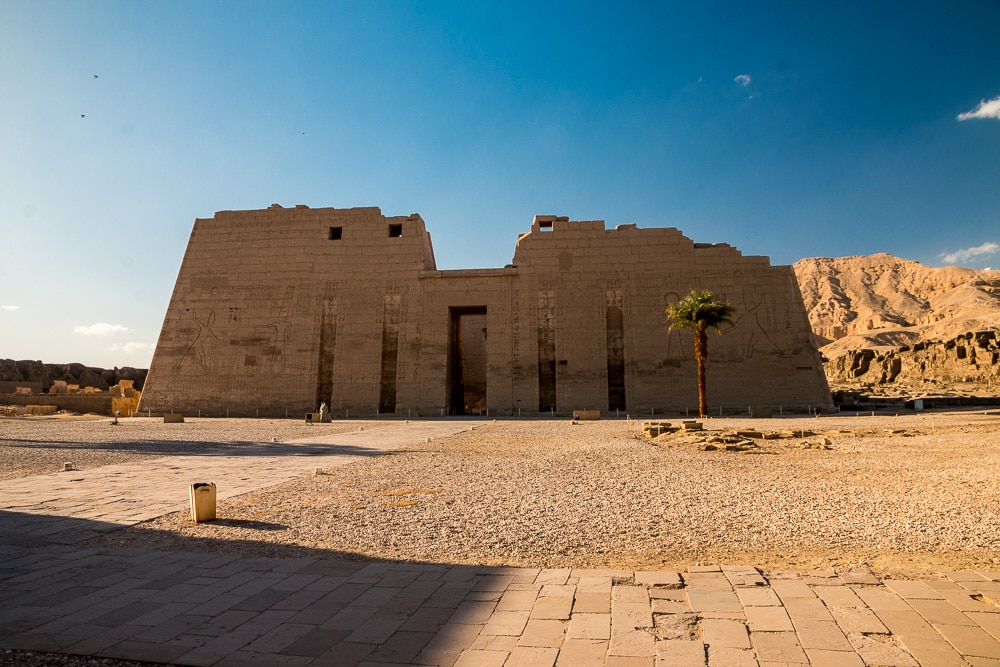 Immediately upon entering the temple, notice the war scenes of Pharaoh Ramesses as they crush their enemies and drop their heads on the ground. The theme of combat and battles appears quite often. Right behind the temple, there are extensive excavations where archaeological research is still underway. The best time to visit the temple is in the early evening in the gentle light of the setting sun, so you can appreciate the beauty of the local reliefs. 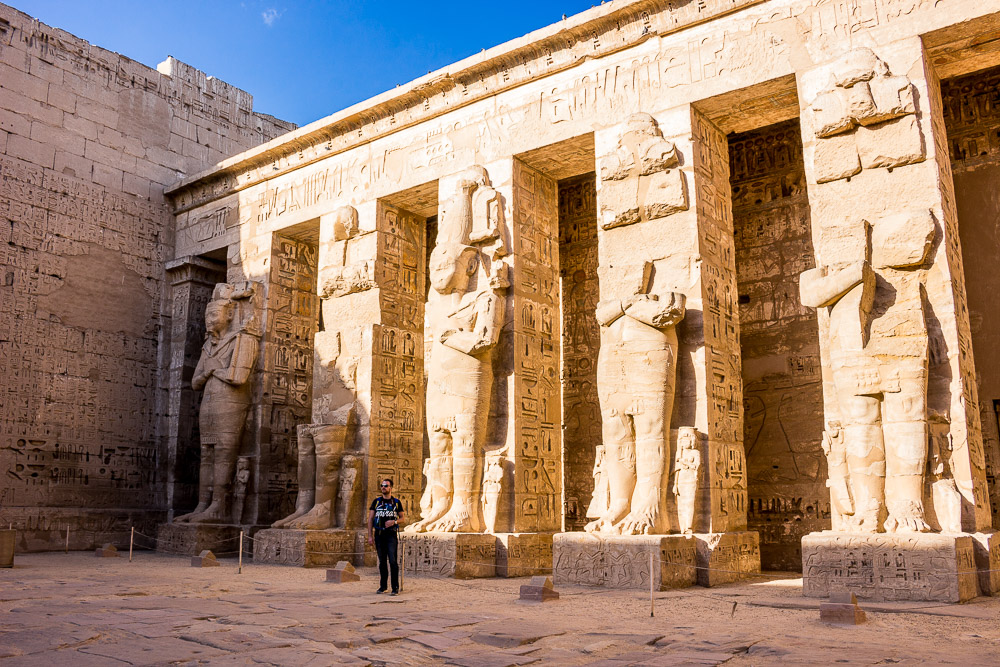 Luxor Museum and Museum of Mummification

Once you’ve enjoyed the breath-taking Egyptian landmarks and buildings, head to at least one of the Luxor museums. Worth mentioning is the Luxor Museum or the Museum of Mummification. The Luxor Museum offers art artefacts such as statues as well as items of common use. There are also two Royal Mummies of Ahmose I and Ramses I. There are also drawing instruments and preserved objects from the crypt of Pharaoh Tutankhamun. The Mummification Museum offers a tour of embalming techniques that have been used to preserve not only human but also animal bodies. You will see sarcophagi or canopies in addition to mummies. 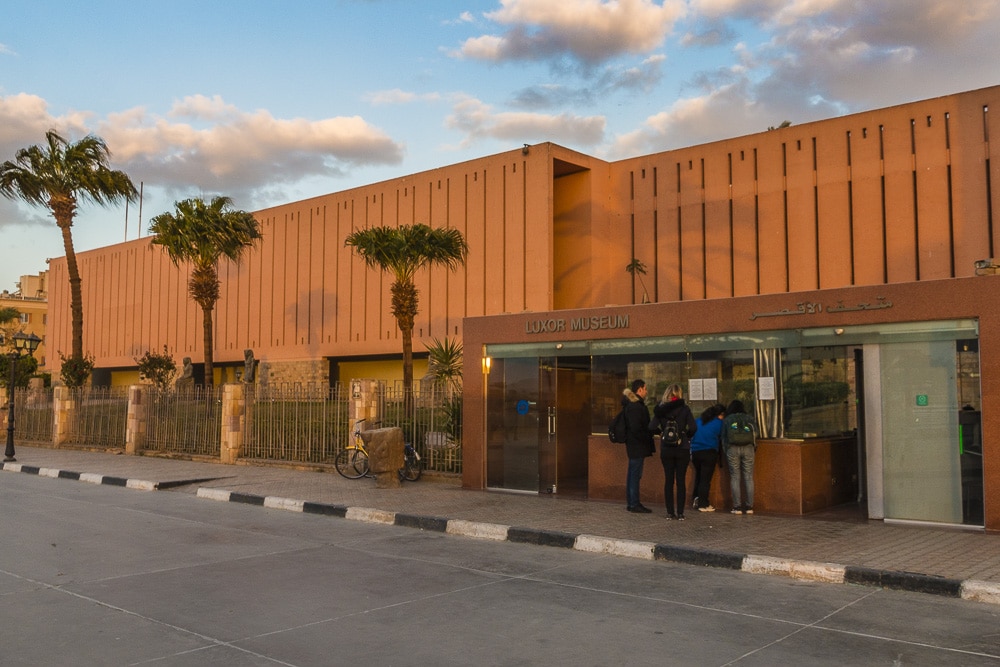 The Luxor Museum is full of unique Egyptian findings

Have you been in Luxor or are you missing anything in our list of things what to do in Luxor? Let us know in comments!

Read Next: Best Places to See in Jordan 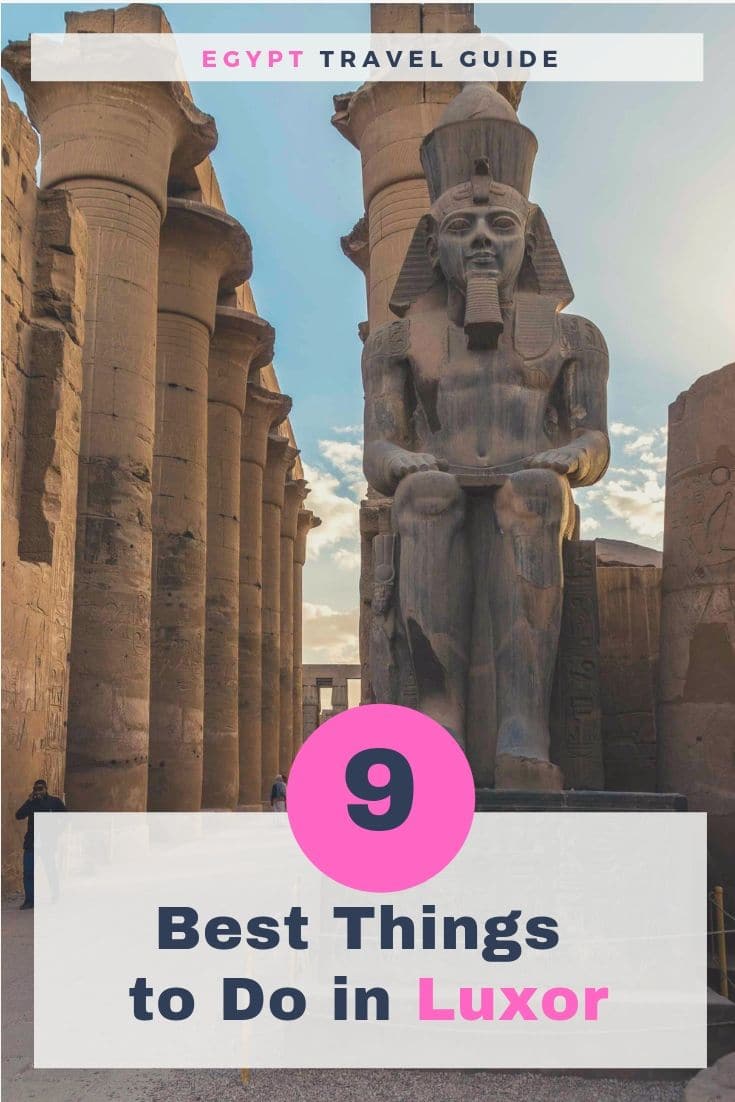