Java, the island of Indonesia, takes pride in two unique things. One of them can be found in the western corner of the country – a very unusual way of sulfur production at the bottom of the active crater of the volcano Kawah Ijen. Another one is the most highly acidic lake in the world. It was created in the crater when the rain and sulfur vapors mixed. The image of this place is fixed in my mind like no other memory of any place I have ever visited. The memory of unbelievably hard lives of the miners and a sinister smell of sulfur. The memory of the place like no other on this planet. If you are curious, and plan to travel around Indonesia, you can take inspiration from us and visit Kawah Ijen.

Earth’s crust contains approximately 0.03-0.09% of sulfur. In its pure form, sulfur can be found around active volcanoes or hot springs. The unique way of its production can be found in the volcanic field of Java, Indonesia. It is the only place on Earth with this way of sulfur production. There have been no changes in the production of the bright yellow element since the end of World War II.

The crater of the volcano Kawah Ijen lies at the height of 2.148 meters (7.047 feet) above sea level. It emits combustible sulfuric gasses with the temperature around 200 °C (392 °F). As soon as they leak into the atmosphere, where they mix with oxygen, they start to burn.

Sulfur burns with a bright blue flame which is visible only in the dark.

Drop in temperature causes condensation of sulfur, and it consequently falls to the ground in a liquid state. Then it is tapped off a steel pipe to one place where it is left to congeal slowly. At this point, the miners come to the scene; they break the matter while it is still warm, putting it into a bamboo handbarrow. Each day, up to 10 tons of pure sulfur is created, with 7-5 tons mined. 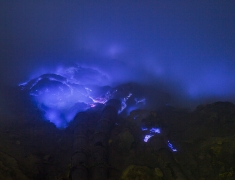 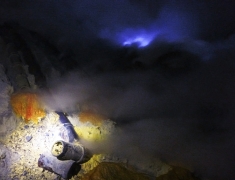 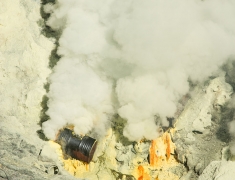 It is not easy to imagine a harder work than sulfur mining under such conditions. The sulfur miners put big chunks of sulfur into two big baskets on each side of a thin bamboo stick. With a load weighing around 60-100 kilos on their backs, they climb from the crater to the surface. Then, there is still a number of kilometers ahead of them, as they have to go down to the base where they unload and weight the chunks. They can take this way only twice a day. It is an unbelievably demanding trip which takes approximately an hour and a half. They take this trip wearing flip-flops and they have no mask on, even though there are sulfur fumes everywhere.

Working in a sulfur mine, Kawah Ijen


The last magmatic eruption occurred in 1817. Since then there are weaker volcanic explosions on regular bases, which are not causing remarkable damages, but they can threaten the miners and other visitors of the Kawah Ijen. There is no wonder that most of the sulfur miners do not live to be the age of 45. At what cost? A few dollars a day!

The sulfur smell is so intense that half of the tourists are not capable of reaching the bottom of the crater. Sulfur irritates the respiratory system, causes constant coughing and settles into pores. After I returned from that sulfuric inferno, I could not get rid of the smell. Even after taking a shower and washing my clothes, the sulfuric smell was still there for a couple days. Also, the volcano remains active, so there is always the risk of explosion. 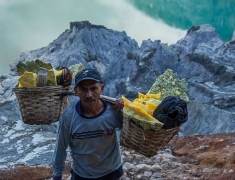 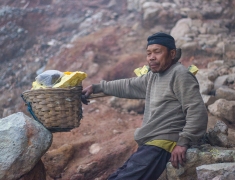 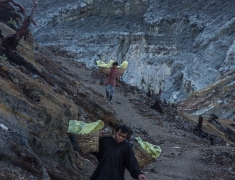 The bottom of the crater Kawah Ijen was flooded with rainwater mixed with leaking sulfur, which created another rarity. And that is a bright green lake of size around one kilometer, an acid lake.

In order to measure the level of acidity in its middle, the scientists had to get on inflatable boats and do the sampling in special gloves.

The record-breaking pH of 0.4 was detected there (non-potable water has pH of 7), which makes the lake one of the most acidic in the world. The sulfur stream flowing out from the lake with a temperature of 50°C floods the surroundings which, surprisingly, abound with living vegetation. It seems probable that life on Earth arose under the same conditions a long time ago. 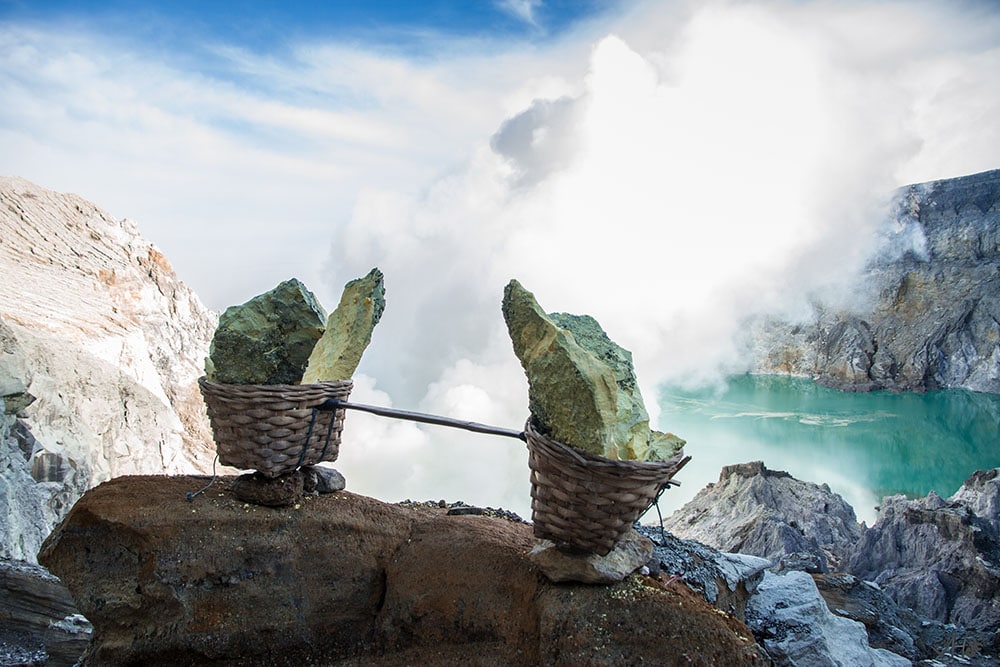 Kawah Ijen – view of the most acidic lake in the world

First-hand experience of the Sulfuric Inferno

The ascent to Kawah Ijen starts usually around 3 a.m. The reason being that blue flames of burning sulfur are only visible in the dark. I underwent the ascent in complete darkness and I must admit that it was really demanding. You can also enjoy the Kawah Ijen peak during a trip from Bali.

With the altitude increasing, the vegetation was decreasing and the sulfuric smell was slowly becoming stronger. After the exhausting ascent to the top of the volcano, there was even more demanding descent to the bottom of the crater still ahead of me. The path was very steep and full of large stones, and the sulfuric mist was blown against me quite often. It made me cough constantly; my eyes were full of tears and my throat was burning.

I managed to be faster than a half of all the other tourists who were well behind me. Many of them could not handle the strong evaporations, so they preferred to watch the miners working on the slope. I reached the bottom, the center of the mining area. There, I got to see sulfur burning with blue flames in close proximity. I watched the sulfur pouring through the pipes to one place where it was left to freeze, and then, the miners started chopping it off, putting the pieces into baskets. I even dipped my fingers in the acid lake nearby. I spent two hours there and when I came back to the top, the sun was already rising. At that moment, I finally got to see the moonscape surrounding us.

During my way back, the miners carrying full baskets were overtaking me, and I still could not believe how much load a human body can withstand. 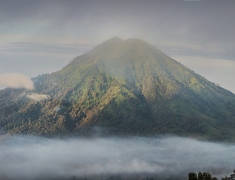 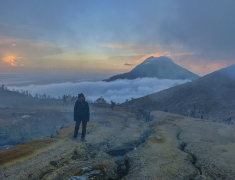 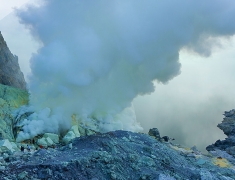 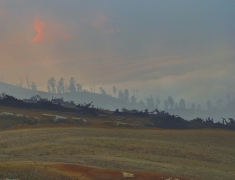 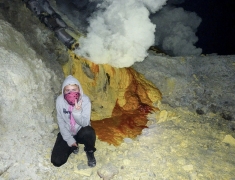 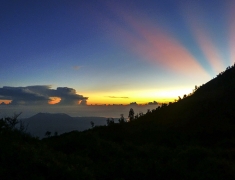 If you are heading to Indonesia and thinking about visiting a volcanic island, then Kawah Ijen is what I recommend to you. All the information needed to plan the trip can be found in this manual.

Big thanks to Vašek Halfar who provided some photographs from his trip to Kawah Ijen. It was very helpful because my own pictures were not of such quality as his 🙂

READ NEXT : 8 Best Activities on Bali