Neuschwanstein and other Castles of Ludwig II in Germany

Neuschwanstein and other Castles of Ludwig II in Germany

King Ludwig II of Bavaria ranks high on the list of the most enigmatic and intriguing historical figures. Visiting such a castle is just one of the many things to do in Germany. There are so many questions about Ludwig that have never been answered. Read more about his castles – Neuschwanstein, Herrenchiemsee, Linderhof and Nymphenburg Palace.

His death alone draws the fascination of people. Whether he took his own life or someone killed him is a never-ending debate. What was his relationship with opera composer Richard Wagner? Why was he fascinated with fairy tales? Was his eccentricity bordering on insane? And, of course, what led him to build a long line of castles?

The Life and Death of Ludwig II

Ludwig was the king of Bavaria and ruled from 1864 to 1886. As a monarch, he was mainly known as a fairy-tale king. He was never very interested in politics and was more concerned with decorating his castles, which almost bankrupted the treasury. He was a dreamer, nearly detached from reality, who lived in his own world. All castles were built using money the Swan King earned as royalty. It all started with a visit to France where he stepped inside several grandiose castles. To bring positive impressions to Bavaria, he thought of building castles in impoverished areas of the state. This act brought a steady flow of income to local inhabitants, especially labourers.

Ludwig was a real weirdo from his youth, an introvert by nature, and spent most of his time alone. He never married, and sources say he was probably a homosexual. His greatest platonic love was Richard Wagner, who he financially supported wherever possible. Although Ludwig lived above the standards and spent a lot of money, people liked their strange king. 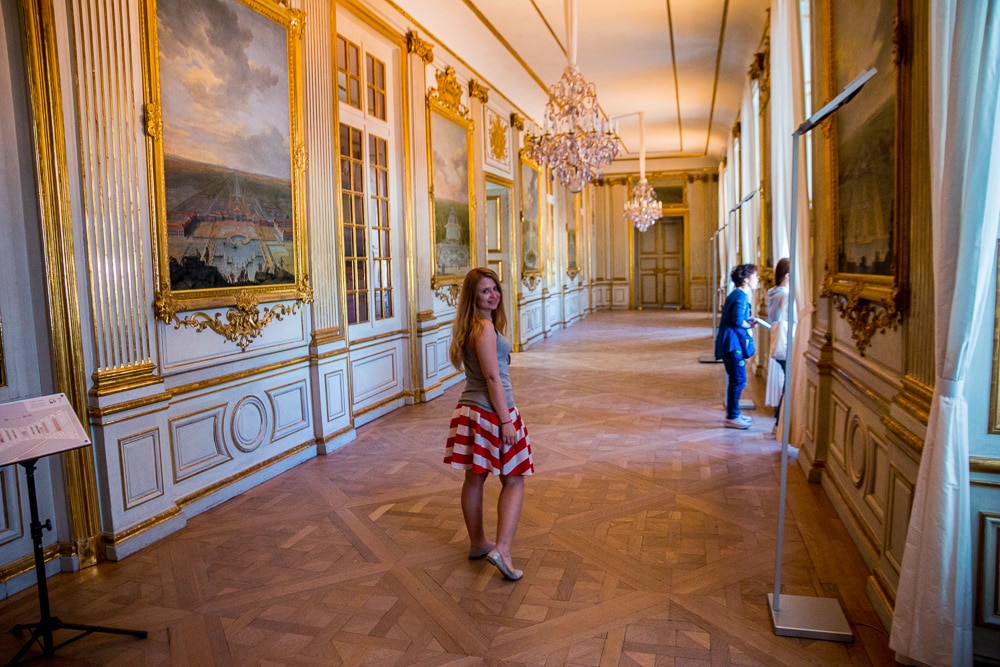 In 1886, his ministers ran out of patience and decided to get rid of the prodigal king. Ludwig was at the Neuschwanstein Castle when he was declared improper by doctors and should be removed from office. Under the castle, a crowd was gathered, wanting to protest against the King’s internment. After a few days, Ludwig was transported to Berg Castle, where he died three days later. At night, he was found dead with his doctor on the shore of the lake. No one knows exactly what happened there, and so the king’s death has been the subject of many conspiracy theories. Among the most popular are those in which the king allegedly tried to escape by trying to swim the lake. He first disabled his doctor, and when he tried to swim across the lake, he suffered a stroke or heart attack in the cold water.

Constructed in 1664, Nymphenburg Palace was formerly the summer residence of the Bavarian Elector Ferdinand Maria and Henriette Adelaide of Savoy. They stayed here after the birth of their long-awaited son, Max Emanuel, whom they had after ten years of marriage.

This is among the most beautiful palaces in Germany, and it owes its beauty to its perfect amalgam of manicured gardens and supreme architecture. It displays an amazing marriage of several art forms that visitors come back to every year. The man responsible for this beautiful and regal place is architect Agostino Barelli, a close ally of Maria. 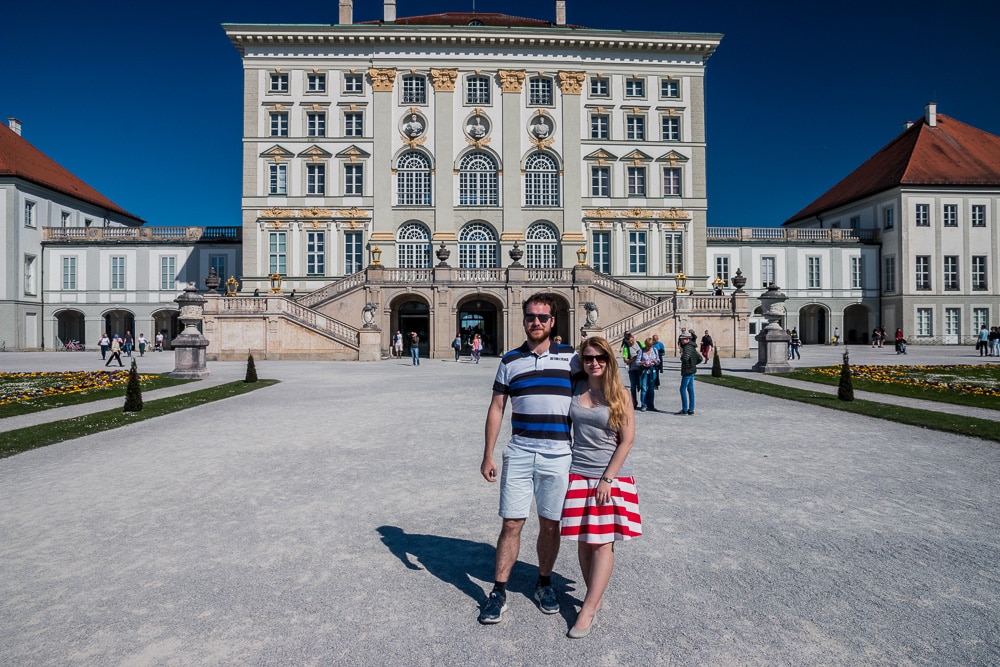 Inside the Nymphenburg castle is the chamber where Ludwig was born

1878 saw the completion of King Ludwig’s Linderhof Palace. The design is inspired by the neo-French style characterized by formal gardens and interiors done with Rococo design. One of the main features of the castle grounds is the electricity-run Venus grotto, which has become a photo-op spot for visitors. Called ‘The Royal Villa,’ Linderhof is the only castle King Ludwig was able to complete before his untimely death. The structure is small in stature but is surrounded by vast gardens and parks.

Inside, Rococo-designed ornaments fill every nook and cranny. The king’s very own creation is in full display. It has a strong South German influence. This added a unique character to the interiors of the castle.

The ornaments which he worked on drew strong influence from his ancestors. These are not imitations but are inspired by their works. Some of the rooms where his works are located surpass the grandeur and beauty of the ones that inspired these. The craftsmanship is unparalleled! 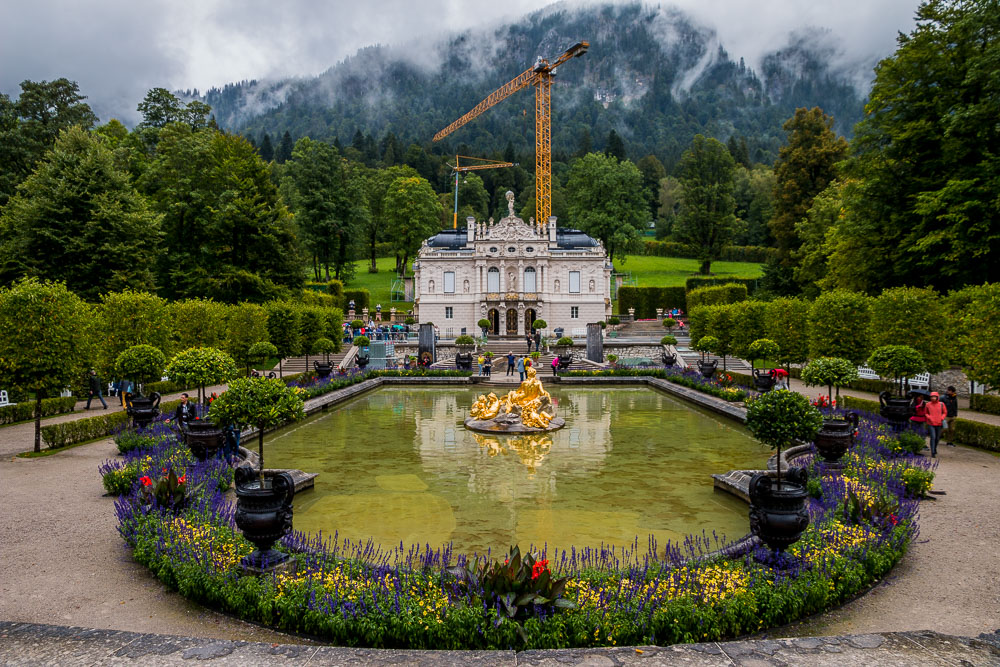 Although Linderhof is a small castle, it is worth to visit it 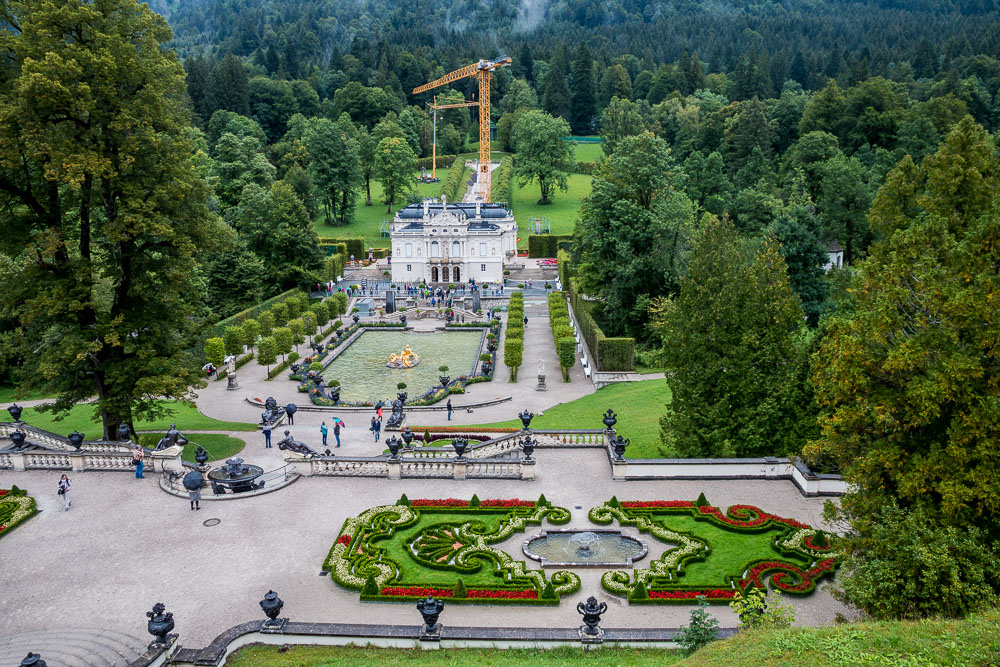 The landscape and gardens around Linderhof are stunning

Eight years before the King’s death, construction began on the Herrenchiemsee New Palace. The main inspiration for this structure is the Palace of Versailles. The name is derived from the two places it was built upon, Herreninsel and Chiemsee.

The king had great admiration for France’s Louis XIV, the so-called ‘Sun King.’ Herenchiemsee was his tribute to him. The king commissioned architect Georg von Dollman to facilitate the design and construction of the castle. Dollman spent a lot of time analysing the architecture and design of the Palace of Versailles. Check out incredible photos of the interiors.

Just like the other castles, this was meant to be a private residence of the king. He was only able to spend ten days in this abode one year before his death. At that time, only the central part of the edifice was finished. Some of the interesting features visitors will find is the private dining area, the marble staircase, and the Halls of Mirror. 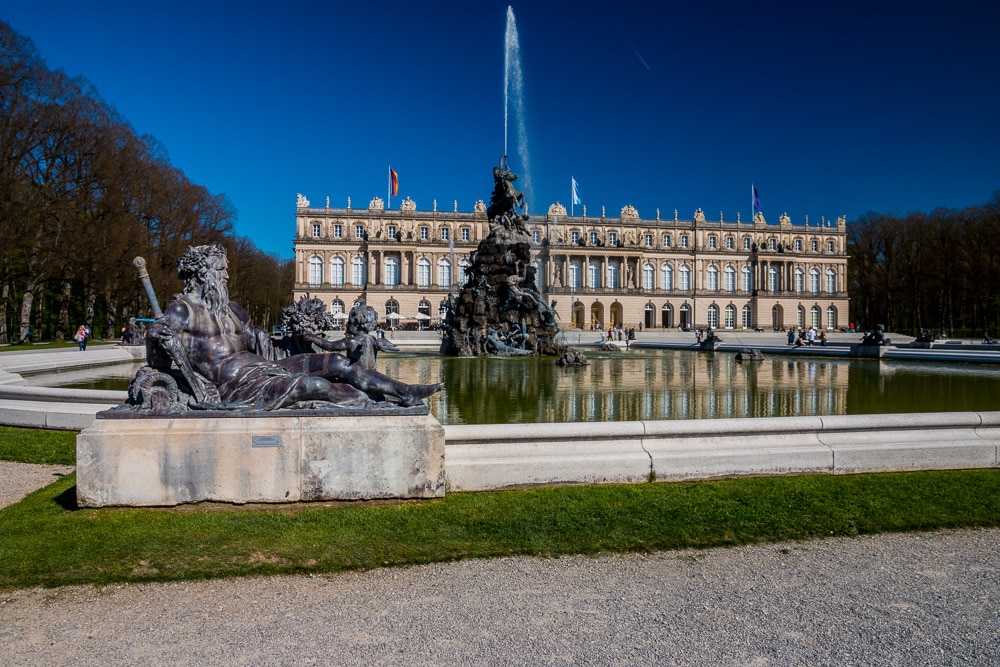 Herrenchiemsee represents a faithful copy of the French Versailles 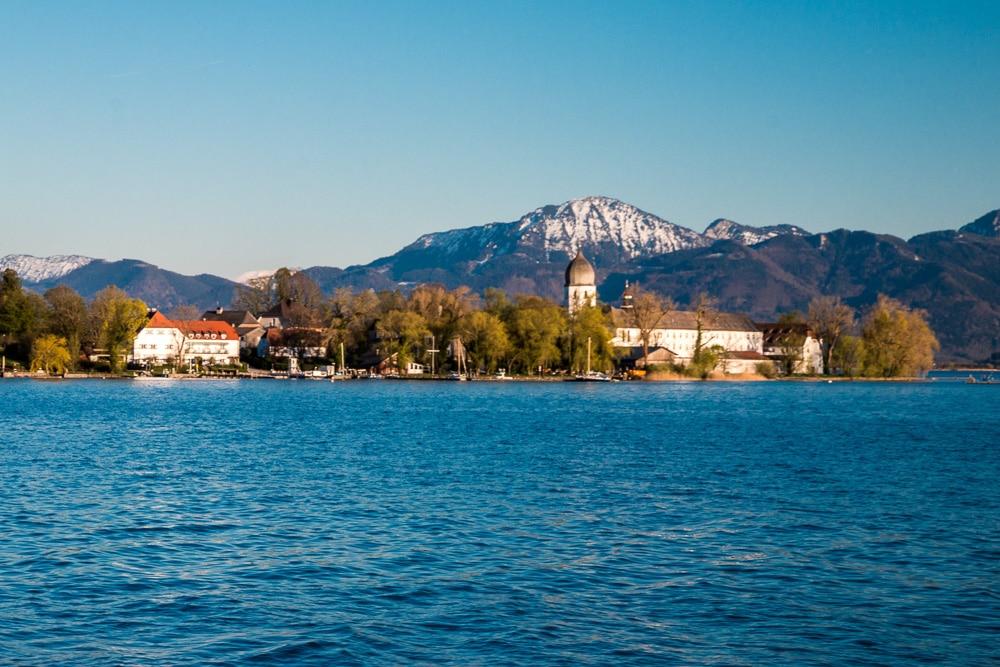 Herrenchiemsee is located on an island surrounded by a beautiful landscape

Schloss Neuschwanstein is designed in the Romanesque tradition with high towers characterizing its architecture. The castle is on a family property that the king’s parents bought. When he was a boy, Ludwig saw the property and immediately envisioned building a castle on it.

In 1869, he turned his vision into a reality as the foundations of the castle were laid. The mountain top property provided scenic views of the surrounding mountains and valleys. All the walls were fitted with artworks depicting scenes from operas composed and created by Richard Wagner.

The castle is composed of fourteen rooms and vast gardens outside of it. Unfortunately, the king died before the castle was completed. However, every plan Ludwig made for the castle was followed exactly. 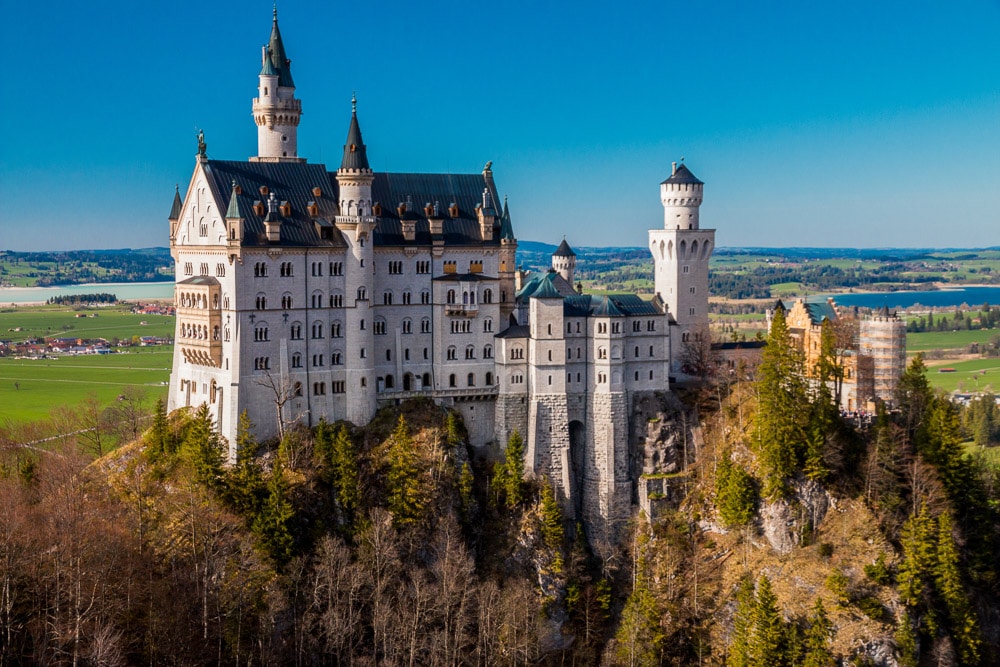 Ludvig’s most famous castle is Neuschwanstein 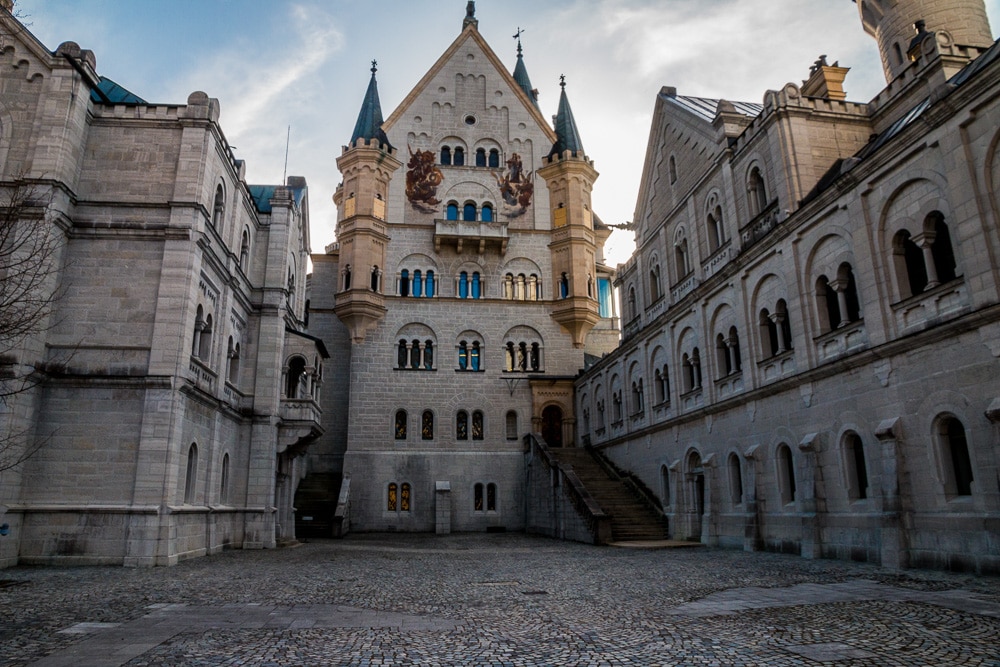 READ NEXT: Best Things to Do in Bruges in Belgium