Ayutthaya was called one of the most beautiful Asian cities before it was ultimately destroyed by neighboring Burma. Nowadays, we can only guess how it might have looked. Dozens of broken temples and Buddha statues may give us a clue. Ayutthaya has retained its magic for centuries and, despite the unfavorable historical events, remained a mysteriously breath-taking place to this day. Set out with us to the former royal city and read our Ayutthaya Travel Guide about a very interesting place you definitely shouldn’t miss on your way to Thailand.

Thailand was in the past, namely until 1939, known as Siam. Ayutthaya was the capital of the Siam between 1350 and 1767. The city flourished and became a cultural center and main business network not only in Asia but also around the world. Merchants who sailed from Europe spoke of Ayutthaya as the most beautiful city they had ever seen. Ayutthaya was a royal city surrounded by several rivers, full of golden temples and Buddha statues, full of fairy-tale riches. By 1700, it was the largest city in the world with a total population of 1 million. After repeated attacks by neighboring Burma, Ayutthaya finally fell in 1767 and it was destroyed. The capital was then moved to Bangkok, which lies approximately 85 kilometers from Ayutthaya. 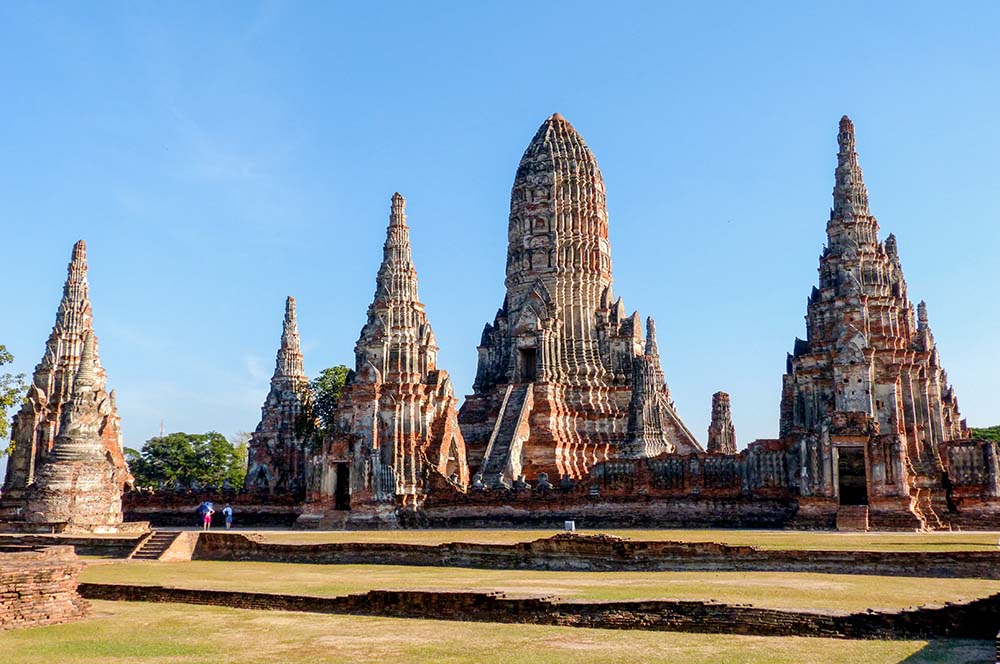 Today we can only imagine how the beautiful Ayutthaya once looked. The ruins and remnants of the temples, Buddha statues and river canals can give us a slight idea. Even after so many years and after the successful attack of the Burmese, this city still retains its unmistakable atmosphere. In 1991, the city’s historic park was listed as a UNESCO World Heritage Site. If you’ll go to Thailand, don’t skip visiting Ayutthaya. Thailand offers plenty of places that are truly worth visiting. The best photos from Thailand can be found in this Photo Travel Guide.

How to get to Ayutthaya

The city lies north of Bangkok, about 85 kilometers away. Countless travel agencies organize a guided day trip to Ayutthaya from Bangkok. However if you’d like to, you can also set out on your own tour. You can take a train or go by minibus. The journey takes about 1.5 hours – it’s very close.

How travel around Ayutthaya

The city center isn’t that big, so you can travel by a tuk-tuk or just walk. Perhaps the best option is to rent a bike and set out on your own. The streets are straight and the distances between the temples aren’t so great, so the bike ride is an ideal way to spend a beautiful day in the city.

What you can do in Ayutthaya

The Royal Palace once used to be the most beautiful building in Ayutthaya. It’s hard to guess how the palace looked in the days of its greatest glory, but tourists can admire it even today. The building is dominated by three enormous stupas containing the remains of kings. A large statue of Buddha used to stand on the right side, covered in 250 kg of gold. Unfortunately, nothing remains. 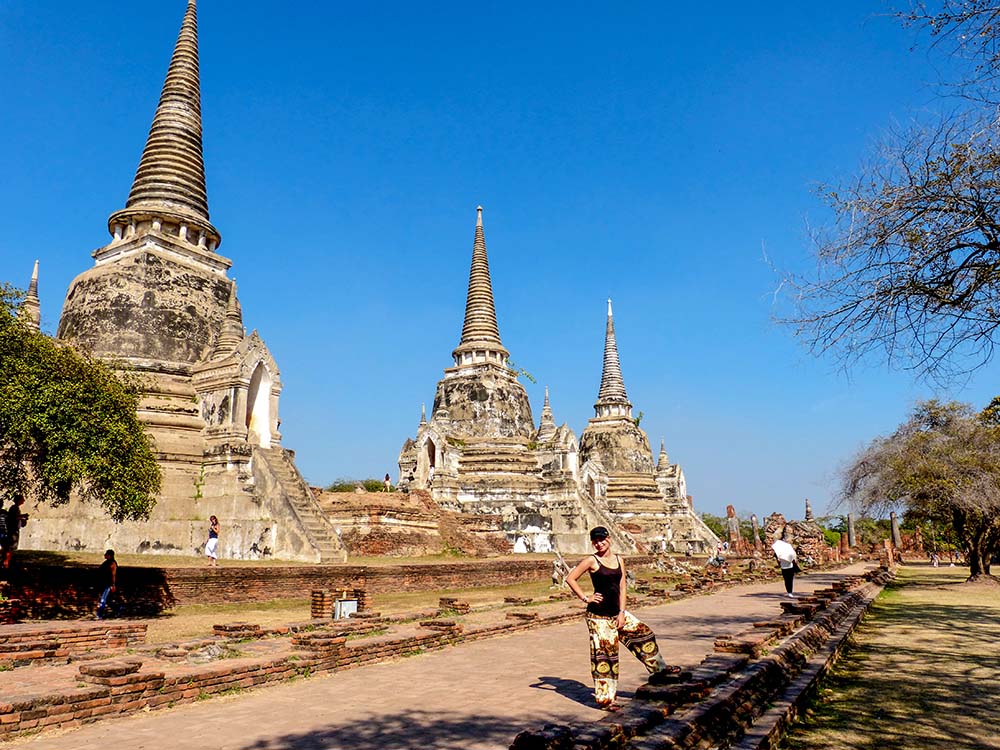 Wat Ratchaburana – Temple built on the site of a committed fratricide

The temple was built at the beginning of the 15th century. It was built on the site, where two brothers fought against each other on elephants for power and both died. At the beginning of the 20th century, the crypt of the temple was plundered and many valuable precious things were lost. Fortunately, the thieves have been caught and many of the priceless items were returned. 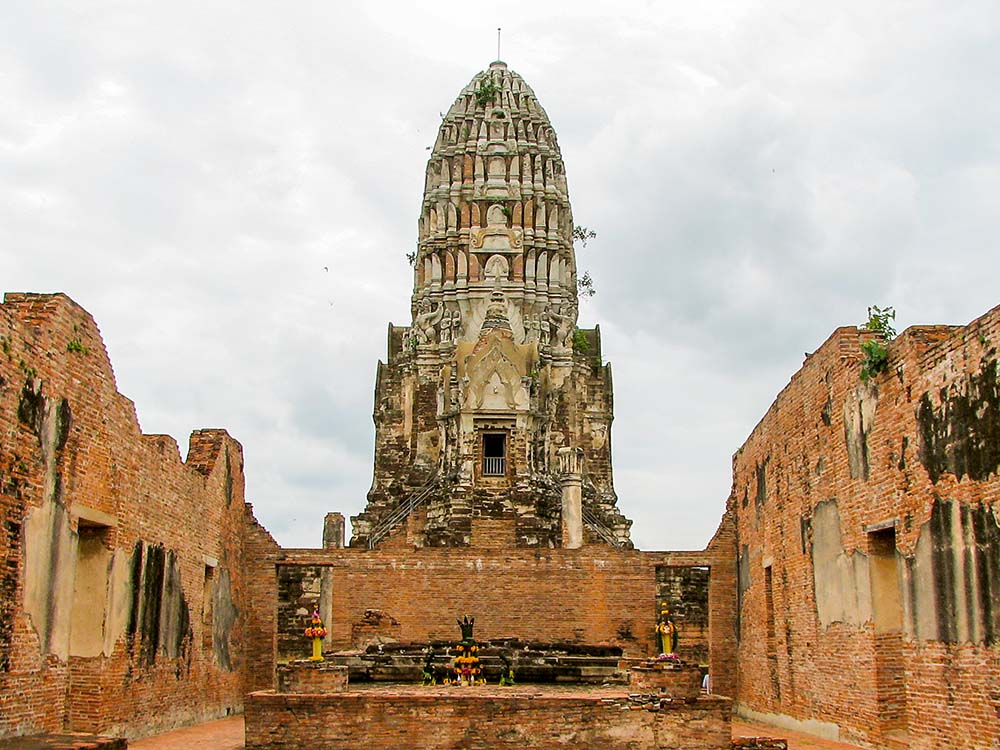 Ruins of a beautiful temple Ratchaburana

One of the best floating markets we have seen in Thailand is located in Ayutthaya. The human-built canal is full of wooden houses standing above water on tall poles. In addition to purchasing Thai delicacies, you can also feed the fish, watch a local theatre play, have your face painted and lots of other activities. 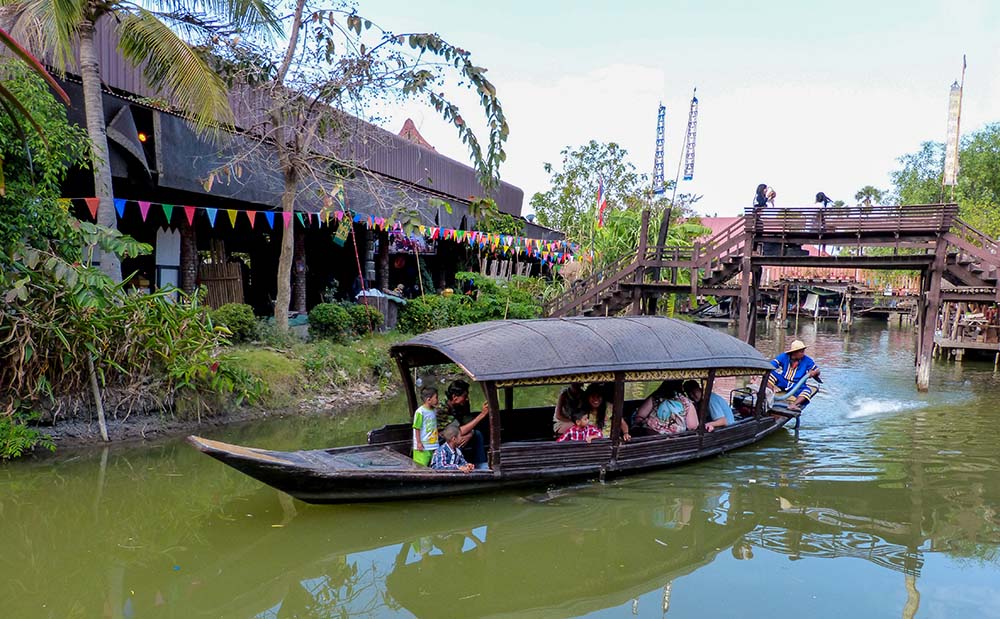 Floating markets in Thailand are very popular – this one in particular

An interesting attraction is the giant statue of the lying Buddha. It’s over 42 meters long and lies completely under the open skies. After Burmese attack, only the remnants of the temple were left, so the local people dress the statue in orange fabrics. An altar where visitors can leave their gifts is located next to the statue. 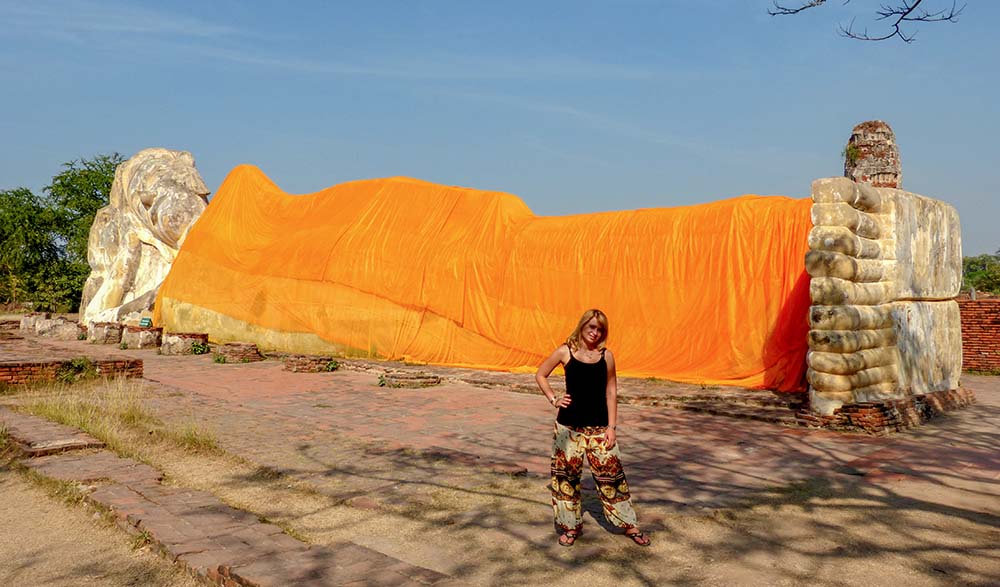 The huge statue of lying Buddha was originally inside the temple

Wat Mahathat – temple of the Monks

This temple is located in the center of Ayutthaya and it was the residence of the supreme leader of the Thai monks. It was a royal monastery where the king conducted all the important ceremonies. Perhaps the most photographed object is Buddha’s stone head overgrown by roots of tropical trees. Under all assumptions, the head was separated from the hull of one of the many Buddha sculptures and was quickly overgrown. Interestingly, you mustn’t approach the head standing. One’s head can never be higher than Buddha’s can, so you can only approach the statue crouching. 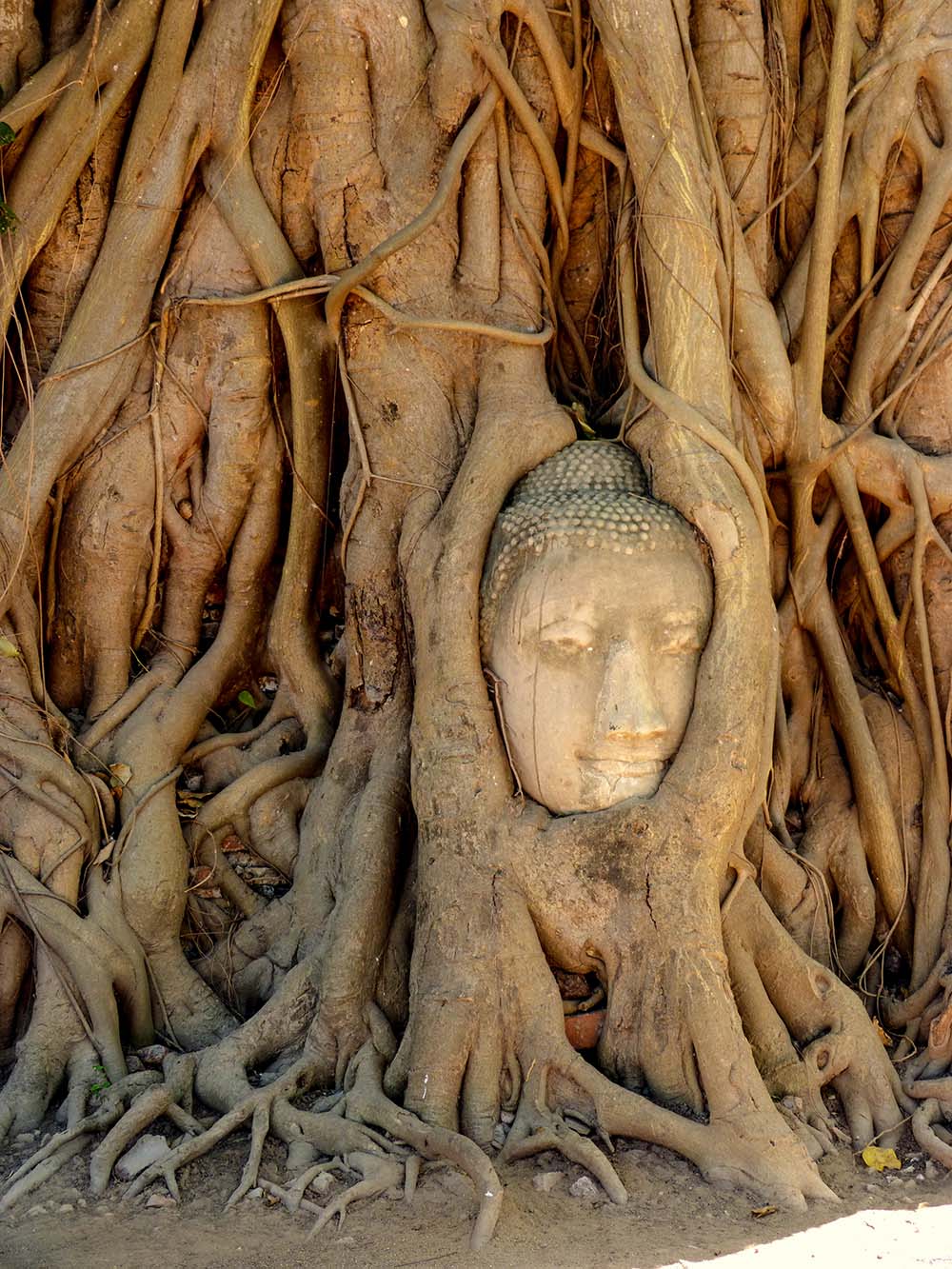 Buddha’s iconic head grows into the roots of tropical trees

If you decide to visit Ayutthaya, you’ll probably also be able to meet elephants. They carry tourists on their backs so they can admire the beautiful temples directly from the height of 3 meters. Only several decades ago, elephants usually worked on construction sites or in agriculture. Since the law has restricted logging and machines started to replace elephants, these animals lost their jobs. Every elephant has to earn its wage – elephant consumes over 250 kg of food in one day. So the elephants began to devote themselves to tourism. Visitors can also visit the local elephant village in Ayutthaya, where the trained elephants show their circus tricks and can even paint pictures. The tourist shop located not far away actually sells pictures made by them. We are of the opinion that these animals belong to the wild so we don’t support such attractions. If you would still like to meet the elephants, we recommend visiting the organization – Elephants World 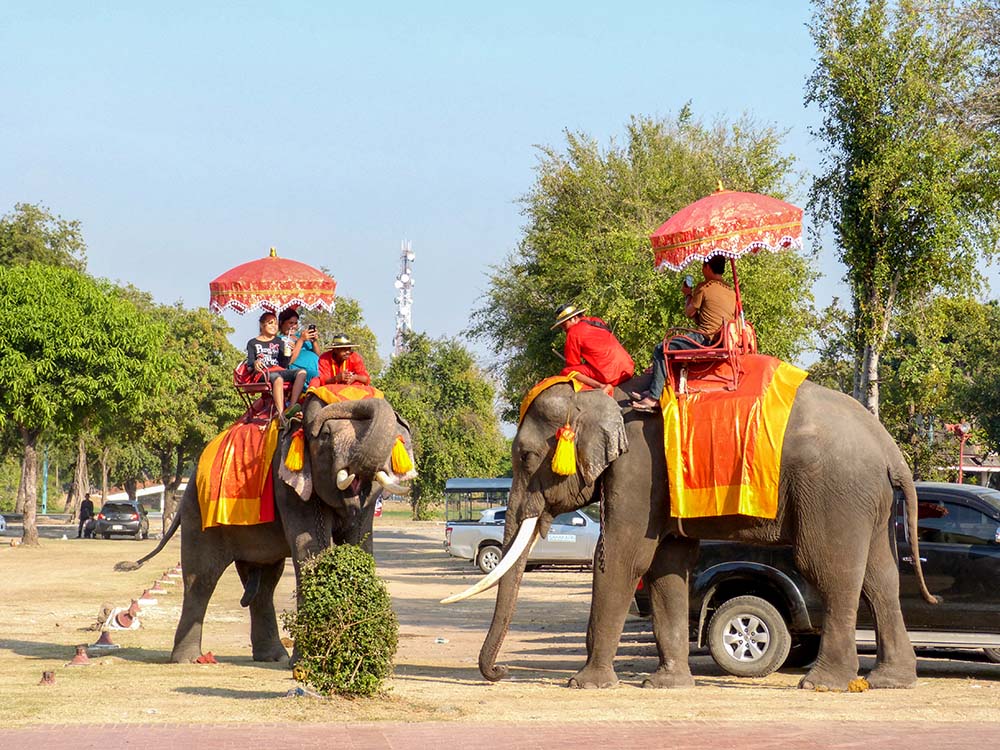 Elephants in Ayutthaya serve as a transport for tourists 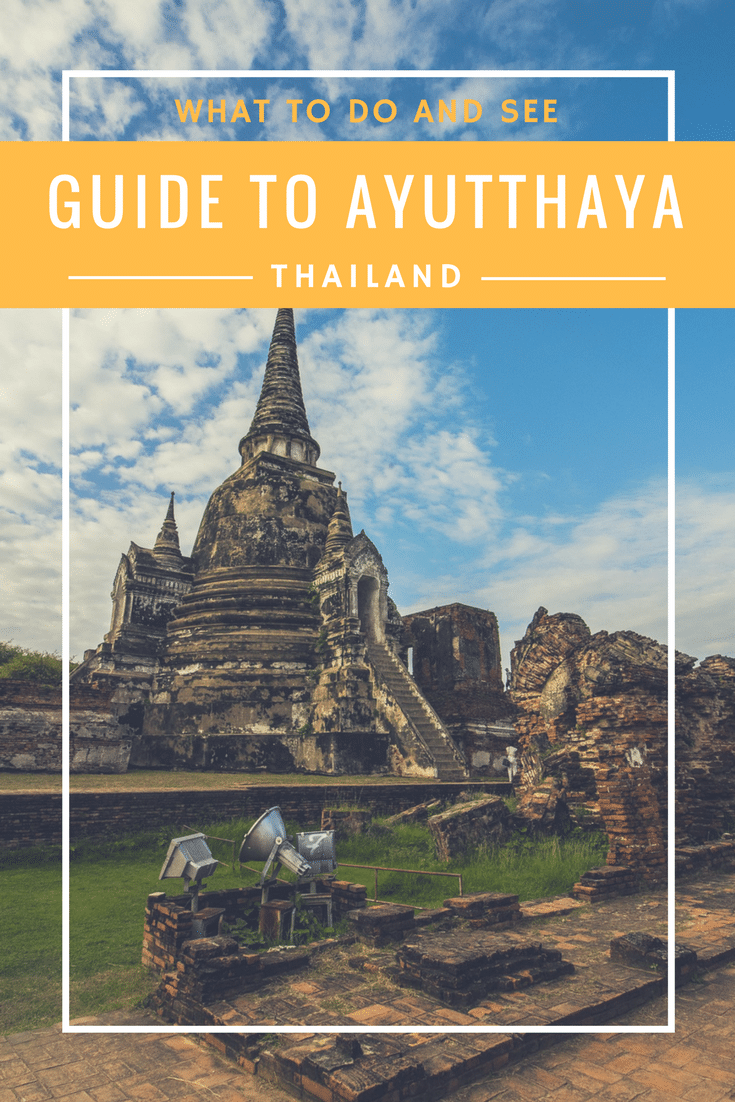