What to do in Marianske Lazne in Czech Republic

What to do in Marianske Lazne in Czech Republic

Marianske Lazne in the west of the Czech Republic is mostly visited by people who want to experience the atmosphere of the spa town and because of famous mineral springs. There are around 40 in the city, but about 100 others are in the nearby countryside. But this city offers something more worth to discover even like a day trip from Prague. In our article, you will find tips on what to do in Marianske Lazne.

The historical town also offers tourists other attractions, which in the past have attracted many famous personalities. Did you know that the composer Richard Wagner composed one of his most famous opera Lohengrin in Marianske Lazne? Or that the writer W. Goethe was experiencing his notorious romance with the noble Ulrike Von Levetzow in the streets of this town? Many other prominent personalities visited the city for an unforgettable atmosphere, crunchy biscuits and sights. The city isn’t mainly a popular tourist destination of Czechs but also of tourists from all over the world. Book your tour to Marianske Lazne now.

If you are thinking about where to find accommodation, check the offers on the Booking or Hotel Combined. Another option is to stay with the locals via Airbnb. If you don´t have any experience yet with this type of accommodation, Marianske Lazne is the perfect place to start, or read our tips and tricks for Airbnb.

The main colonnade in Marianske Lazne

What would be a spa town without a colonnade? The main colonnade in Marianske Lazne is one of the most beautiful ones in the Czech Republic. The locals call it the Colonnade of Maxim Gorky and it is one of the main symbols of the city. It was built in the Neo-Baroque style at the end of the 19th century and its designer was inspired by the Viennese style that was then fashionable. The construction survived both World Wars, which unfortunately cannot be said about other parts of the city. Nowadays it is surrounded by a large park with the Cross Pavilion and one of forty city springs. From the Colonnade, it is only a few steps to shops with renowned spa wafers that you will never forget, and the main street full of restaurants and bars.

The main colonnade in Marianske Lazne

Singing fountain in the city centre

The Colonnade in Marianske Lazne was enriched with a singing fountain in 1986, which combines a musical concert with a ballet of water every single day during the season. The season begins on April 30th and ends at the end of October or early in November. If you are at the spa currently, fetch to the fountain anytime every odd hour from morning until eleven o’clock in the evening. In the dark, you will even see light effects. Fountain spraying systems have more than two hundred and fifty nozzles, and the water sprays up to six meters. The city has a collection of accompanying music from dozens of well-known musicians.

For every visitor, a walk through Boheminium Park is an exciting experience. In addition to the beautiful landscape, you will see more than 70 smaller copies of famous historical monuments located in the Czech Republic. On a 1:25 scale there is Karlstejn Castle, Cervena Lhota Castle, telecommunication tower on Jested Mountain or the stone bridge in Pisek.

Marianske Lazne doesn’t only charm famous people, but also the entire giant shipbuilding company Lloyd Austriacol, which built an ocean cruiser and named it Marienbad (a German city name translation). The flag of the Czech spa town was flowing over the cruiser and the excursions slept overlooking the panorama of the Marianske Lazne on the walls. The ship was launched on the water in 1912 and was scrapped twenty-five years later.

There is also a town museum in Marianske Lazne, which is in the oldest preserved house of the historical part of the town. The building is the last preserved example of the city’s appearance at the time of its historic transformation into a spa town. Expositions are open from Tuesday to Sunday. In addition, it is a town full of historic, beautiful buildings, where today are mostly wellness and spa hotels, many of which are located on a hill surrounded by forests and parks. By the 1950s, the small town was crossed by trams.

On some preserved photographs, it adds San Francisco-style charm to the city. As we focus on what to do in Marianske Lazne, we cannot miss a trip to the nearby Tepla Monastery. Without it, Marianske Lazne wouldn’t probably existed. During the 19th century, its abbots helped to build the town, and have it given a status of a spa. If you are interested in other cities in the Czech Republic, don’t forget to visit the second largest city in the Czech Republic – Brno.

The Premonstratensian monastery, situated about 12 kilometres from Marianske Lazne, was founded in 1193 by the Czech nobleman Hroznata, whose remains are today placed in the north chapel of the monastery. During the 17th and 18th centuries, the whole area was rebuilt into a Baroque style, which is still there today. There is a large library on the premises, where the monks hold about 100,000 books, including many manuscripts, codes and pre-prints, as well as a museum. Visitors can choose from several sightseeing circuits for children and adults. Below the monastery is the underground – a galley system designed to drain moisture from stone monastery buildings. It is open to the public, however, only if pre-booked and up to 15 people at a time. For seasonal opening hours and admission, look at the monastery’s website.

What to do in Marianske Lazne after going through all the sights?

What to do in Marianske Lazne after going through all the sights? Check out the cable car that connects the two famous Koliba and Krakonos hotels. You can visit one of the many bars, interesting ones are La Bazaar, Pueblo Mexicano or Club Na Rampa in the evening. Marianske Lazne is also active in organizing literary festivals or classical music concerts, and the city offers tourists various events whether outdoors by sun or snow, for the current program don´t forget to look at Marianske Lazne’ website.

How to get to Marianske Lazne from Prague

The easiest way to travel to Marianske Lazne from Prague is by train. Ceske Drahy has a few daily direct connections, or you can rent a car and drive. There is also a possibility to take a bus or a train from Prague to Karlovy Vary and then go by bus to Marianske Lazne. If you want to buy a train or bus ticket, we recommend checking Go Euro where you can easily compare all the prices.

If you have more tips or question about what to do in Marianske Lazne, let us know in the comments.

Read Next: Visit the beautiful nearby city Cheb 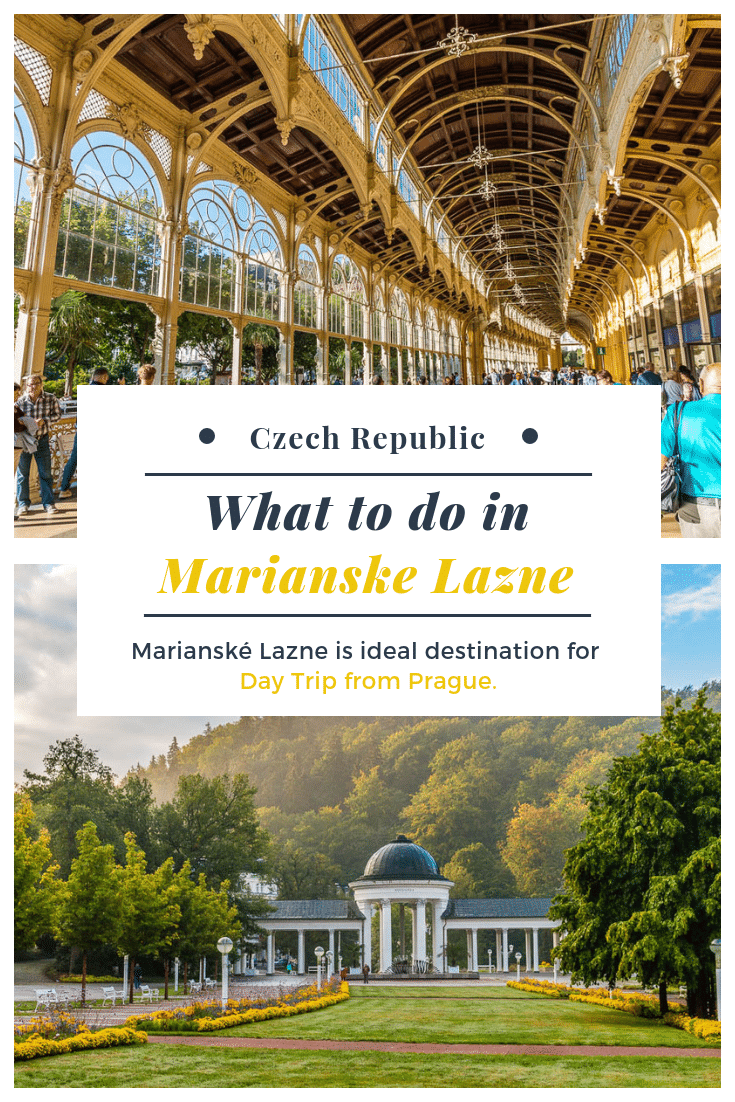