Visit the unique town of Cheb in Western Bohemia

Visit the unique town of Cheb in Western Bohemia

The town of Cheb is undoubtedly one of the historically attractive towns. The beautiful square with a panorama of a Gothic church, a unique castle, medieval houses, and many other sights don’t attract as many visitors as you would guess. The most unique monument, however, is the medieval roof structures. Are you interested in why Cheb is so unique? Read more…

The first mention of the settlement in the Cheb area comes from the 11th century. Cheb witnessed many important historical events, such as the wedding of the Czech king, the signing of the peace agreement or the murder of the famous Czech nobleman, Albrecht von Wallenstein. The town of Cheb lies in the westernmost tip of the Czech Republic, and it has become the target of disputes between the Czechs and the Germans. The situation culminated during World War II. After Adolf Hitler’s invasion of the city in 1938, thousands of Czechoslovakians had to leave the territory. Sudeten Cheb was later annexed to the Third Reich. After the war, the situation completely changed, as the Germans were forcibly evicted, and Cheb became a permanent part of the Czech territory.

Not far away, you can also visit the famous Czech spa town of Marianske Lazne. 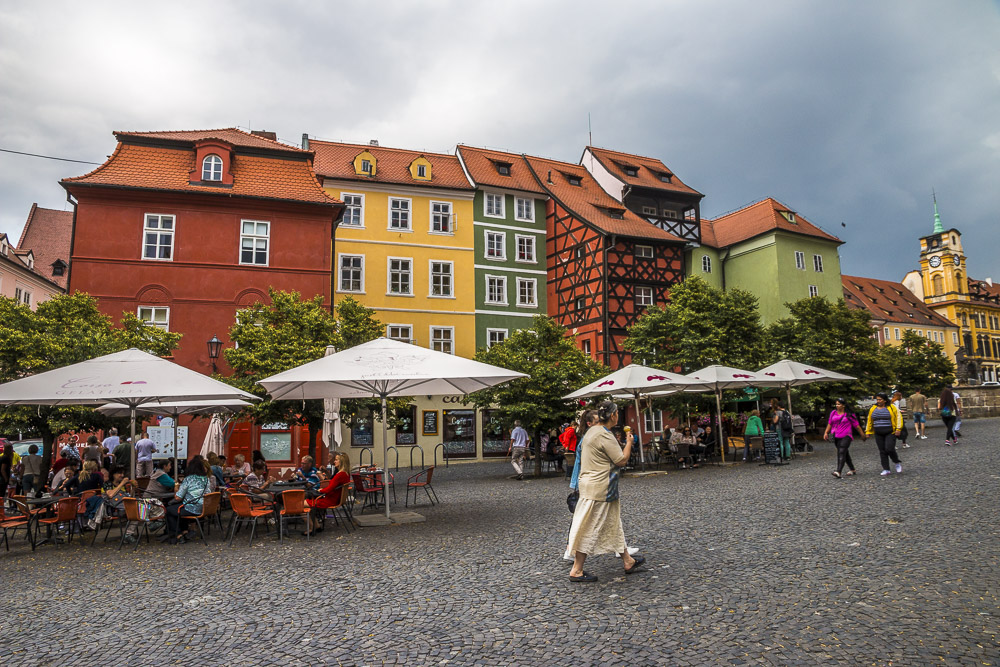 Cheb was one of the rich towns in the past. While single-storey houses have been built in the surrounding towns since the 14th century, in Cheb, up to three-storey houses with high roofs and huge attics grew on the square. This is the reason why these houses were not rebuilt in later years and have been preserved to this day. You can even see the famous Spalicek in the middle of the square. It is a set of eleven half-timbered houses that date back to the 13th century. The houses are three or four storeys high, stand on small plots and are divided by a narrow Kramářská alley, which is only 160 cm wide. A set of stalls where goods were sold stood on this site. The owners of the stalls paid relatively high fees to Cheb for the rent, and so they were supported by the city. Over time, the stalls were replaced by wooden huts and eventually brick houses, which have survived to this day, despite various reconstructions. In 1960, Spalicek was completely renovated, and today, there is a famous sweet-shop and restaurant. Spalicek was decorated with the third row of houses, which were demolished in the 19th century. 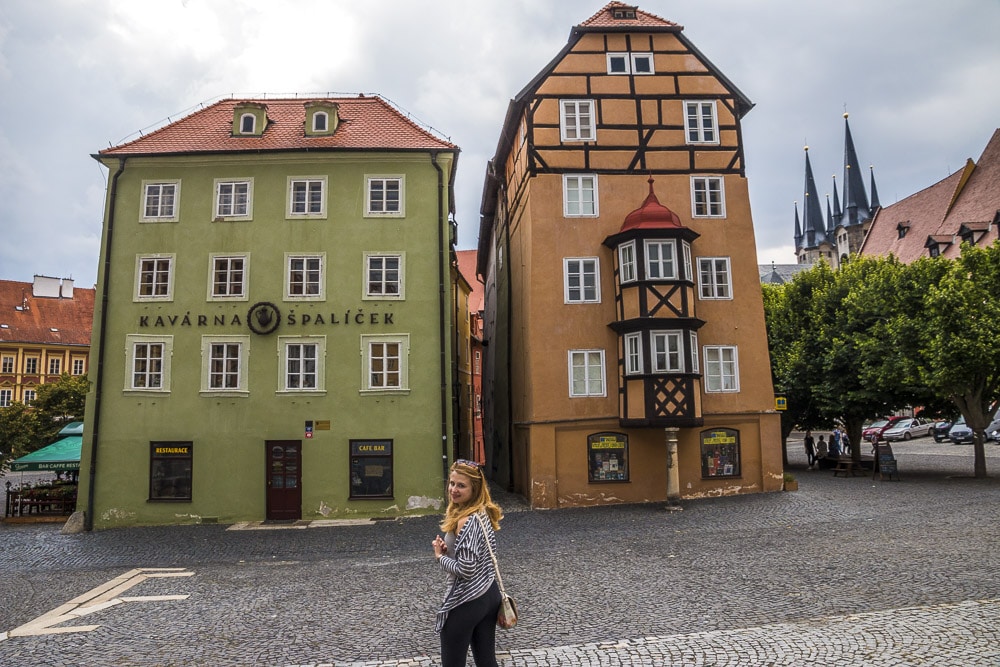 Probably, the greatest unique thing about Cheb is the historic timer constructions on houses standing on the square. This is totally unique because we can find dozens of roof structures from the Middle Ages in one place: Renaissance, Baroque and younger times. If you look closely at the roofs of the houses, you will not miss a single peculiarity. The roofs are extremely high and full of small skylights. In the Middle Ages, the attic space served as a storage room, where goods were stored. Therefore, careful attention was paid to the construction of the trusses. It is surprising how good the work was done by local carpenters without a single iron joint. Nowhere else is there such a complex of wooden historic roof structures in such perfect condition. 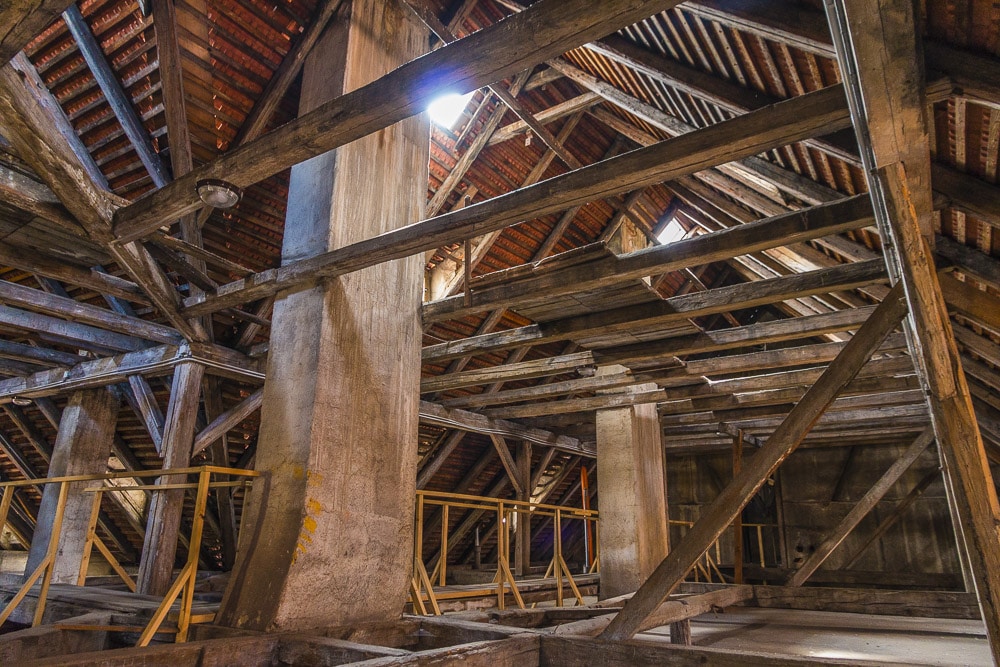 One of the oldest timer construction in Cheb

The castle in Cheb is one of the important cultural monuments and the only Kaiserpfalz preserved in Bohemia. The German word “Kaiserpfalz” refers to the emperor’s seat in the early medieval Holy Roman Empire. At that time, the monarch did not rule in a single city but moved with his entire court throughout the empire, and the Kaiserpfalz formed a network of his residences. The hill above the river Ohří was inhabited as early as the 9th century, and Frederick I built the castle here as early as 1165. 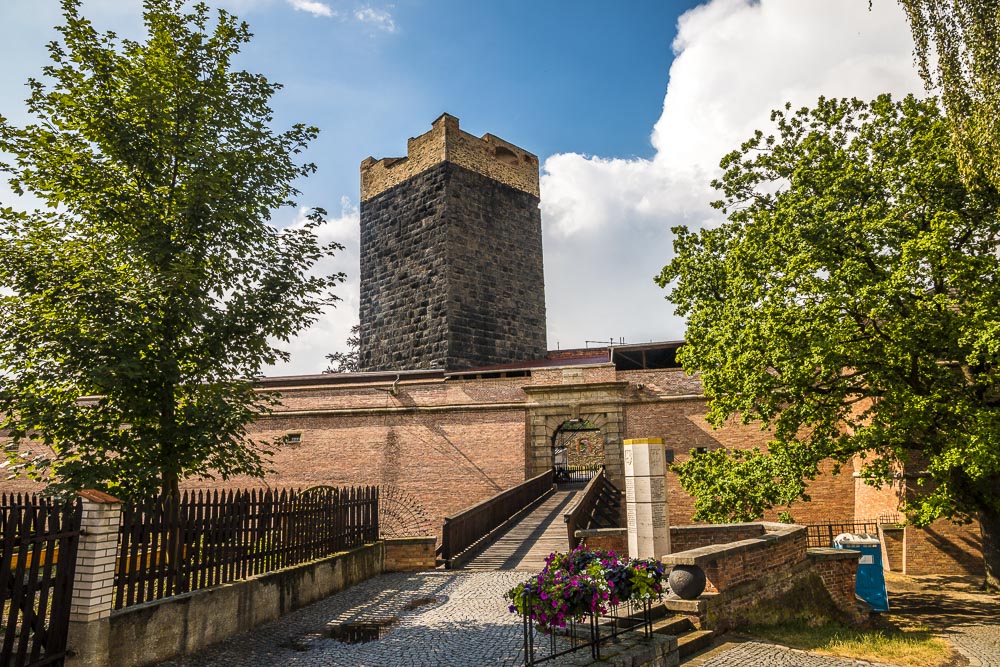 The castle has a long history, and so only the torso of the castle palace has been preserved to this day. In perfect condition is a black offensive tower, which will reward each visitor with a beautiful view of the Cheb landscape. One of the biggest unique features of Cheb Castle is the two-storey chapel of St. Erhard and Ursula, which is one of the most remarkable works of early Gothic in Central Europe. It is a real artistic miracle, which was built by Frederick II, who became King of Sicily in 1212. The most famous emperor of the High Middle Ages and the father of the Italian Renaissance was happy to stay in Cheb and let the Czechs build this magnificent monument. 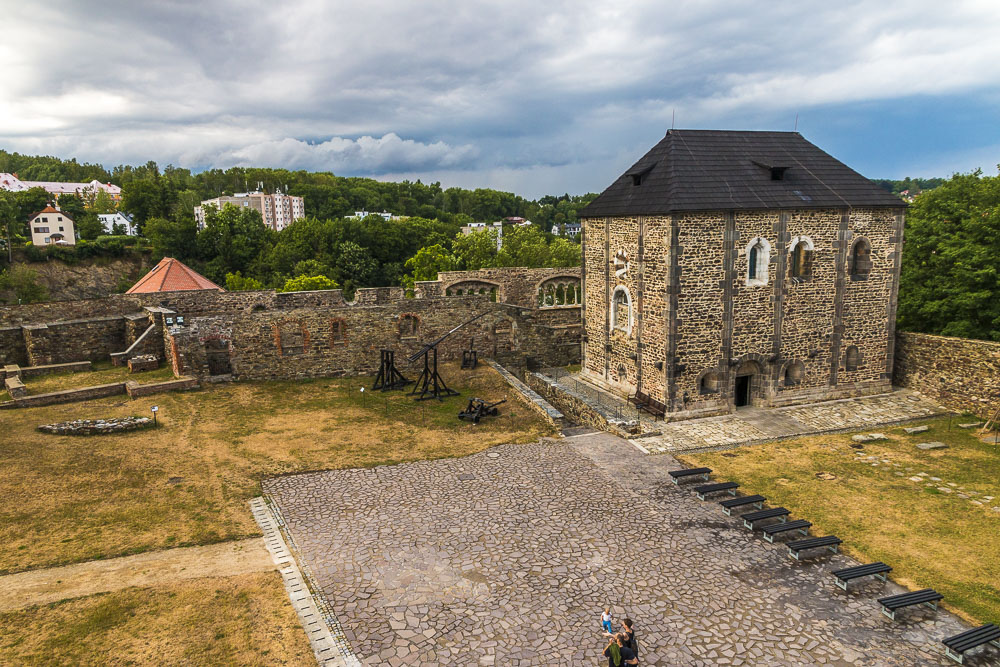 The Gothic chapel looks ordinary on the outside, but inside there is an architectural gem

In the 17th century, the castle was partially rebuilt, and combat and storage casemates were built here. These were in the underground and above-ground parts of the castle fortifications and are accessible as part of a guided tour.

How to get to Cheb

You can easily get to Cheb by bus or train from Prague. You can easily buy tickets online at Omio. Anyway, the most convenient way to get to Cheb is by renting a car. Have you read our article with tips for renting a car? Don’t forget to arrange suitable accommodation in advance. The truth is that there are not many hotels in Cheb, but this offers an ideal solution – accommodation via Airbnb, which we also used.

If you have more tips and ideas on what to see in Cheb, please share it with us in the comments.

Read next: What to see in Marianske Lazne