The Angkor Wat temple complex is located in the Cambodian jungle spreading over a huge area. In addition to the main Angkor Wat, there are dozens of different interesting temples in the same area that remind us from the Khmer Empire’s golden age. Visitors must choose what temples they want to visit – there are so many temples that seeing them all is nearly impossible. That’s why we’ve put together the best 11 temples in Angkor Wat you must see.

The most significant temple of the Angkor realm – Angkor Wat itself – offers a unique experience both culturally and historically. The temple is shrouded by a veil of secrets and the number of tourists who visit the monument is rising every year. In this article, you will find out how to get around the different temples and how to choose a strategy during your visit this huge complex. We have pinpointed the most interesting and gorgeous temples that can be visited in one day while not missing out on anything significant.

The largest and most impressive temple you shouldn’t  miss. Don’t  be discouraged by the crowds of tourists, but be prepared for them. This monument is often compared in shape to the French Versailles. The temple itself is surrounded by a high square wall, with a moat surrounding it on one side. Visitors enter via a bridge and the entrance gate leads them to the entire complex. The main feature is the 70-meter tower, which is surrounded by other four towers, forming the shape of a lotus flower. The entire temple is decorated with religious reliefs that are in perfect condition. Tourists are also able to visit the tower – the view of the surrounding area is unforgettable. 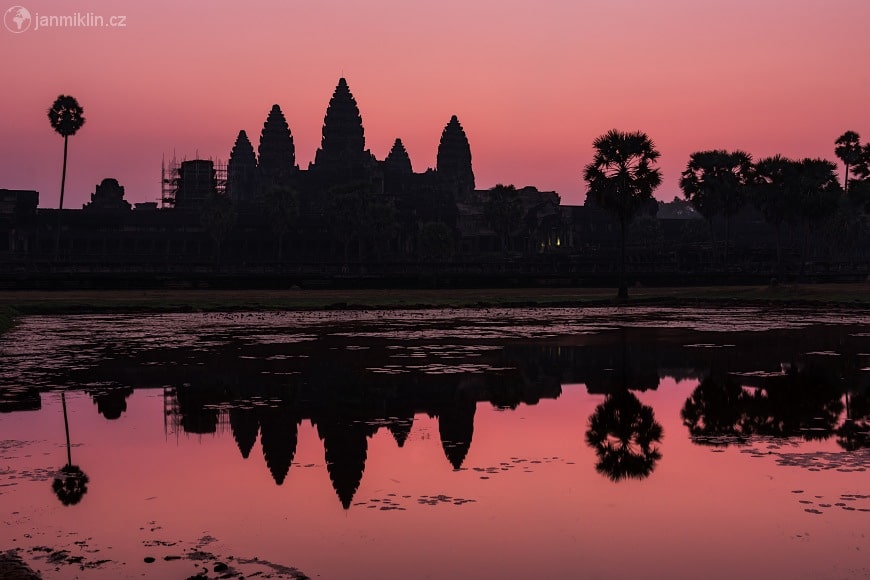 This Buddhist temple was, according to most historians, built in the middle of the 10th century and it was used without interruption by monks until the end of the 1960s. Although it has been well taken care of during its use, it is in a rather poor condition. Scientists think that the reasons may be bad material and inappropriate construction techniques. Restoration work is already taking place. A huge reservoir called Srah Srang is located opposite the main entrance, which was probably used for ritual cleansing. The temple has its singular atmosphere and it would certainly be a shame to miss it. 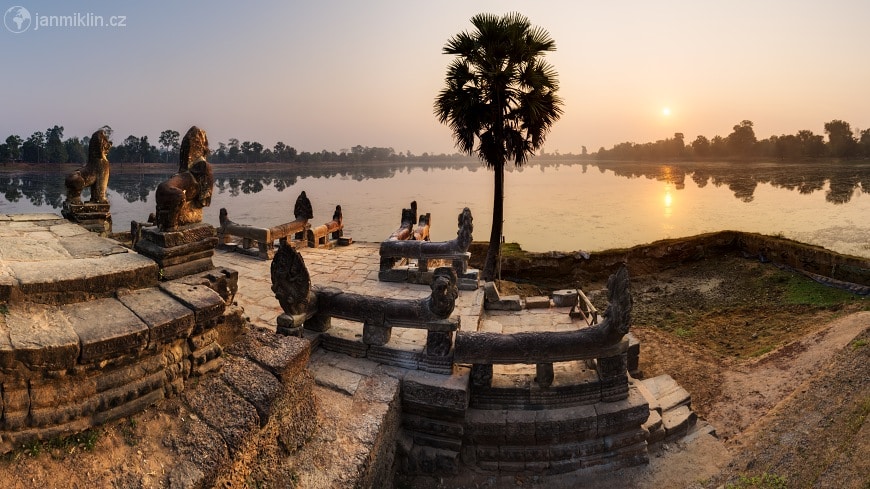 This temple has the shape of a five levels pyramid standing on a high foundation. An impressive path leads to it, beginning at the Elephant terrace, which is approximately 200 meters long. Since the interior of the Temple pyramid was filled with sand during the construction, it didn’t last long, and the building collapsed over time. The restoration works began as early as the 1960s, the monument was completely dismantled and the interior was reinforced with concrete. Unfortunately, this action was interrupted by war and consequently by the regime of the Khmer Rouge. Completion of the works took place at the turn of the millennium, but the reconstruction has never been exactly completed. One of the reasons was the loss of important material during the unstable political system. 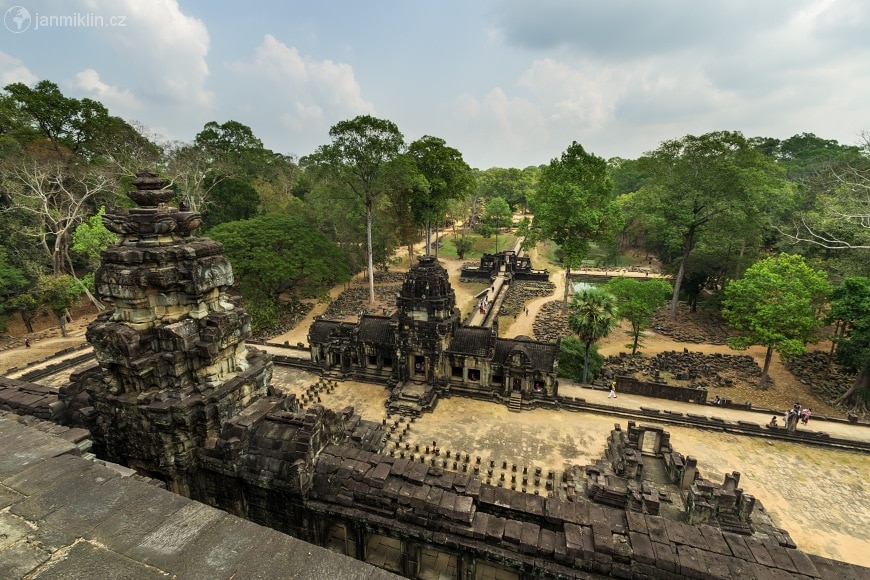 View from the top of the Baphoun Temple (photo : Jan Miklín)

It is one of the most famous temples of the Angkor Empire. It is unique mainly because it is the only state Buddhist temple built during the Angkor period. Its typical features are the hundreds of human faces carved into stone, making it completely different from other temples. Researchers still can’t agree to whom the face of the stone with a mysterious smile really belongs. A 4-meter Buddha statue used to stand in the central shrine of the temple that was pulled down during a religious coup. When Hinduism became the state religion again, the statue was dropped into a well below the temple. However, it was pulled out in the 1930s and is currently on display in Angkor Thoma. 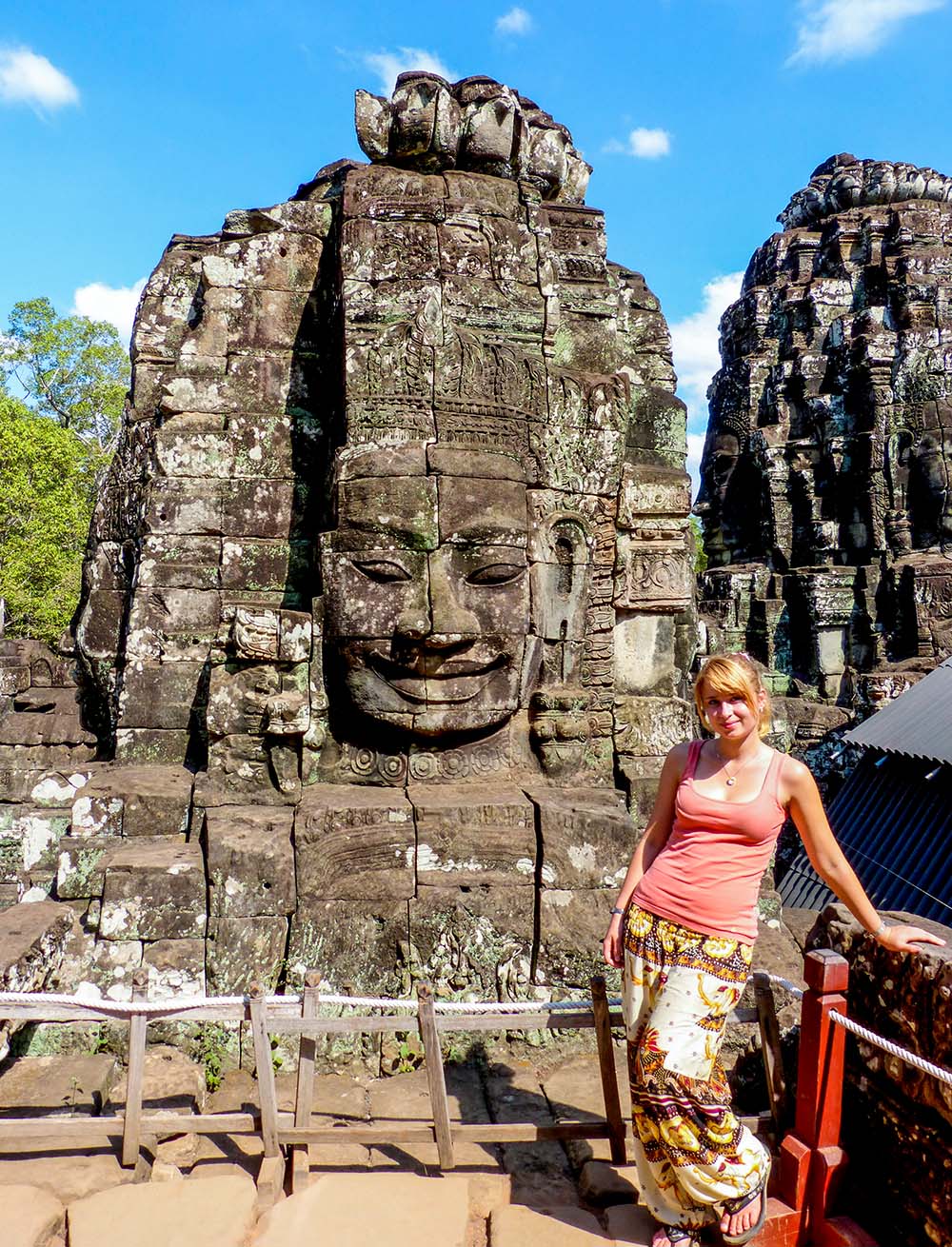 This building is particularly interesting because it was built on an artificial island in the middle of a huge water reservoir. The temple was only accessible by boat. For this purpose, a large terrace was used, which served as a pier. The reservoir, which used to be filled with water, has been dried for centuries, and the remains of the water tank aren’t noticeable at all. The most intriguing are the elaborately detailed sculptures of life-sized elephants that guard the entrance to the temple. Using the stairs, visitors can reach the top floor of the three-story building with an amazing view of all sides of the temple. On the upper terrace, there are a couple of rectangular buildings without windows; it’s not completely understood what purpose they served. 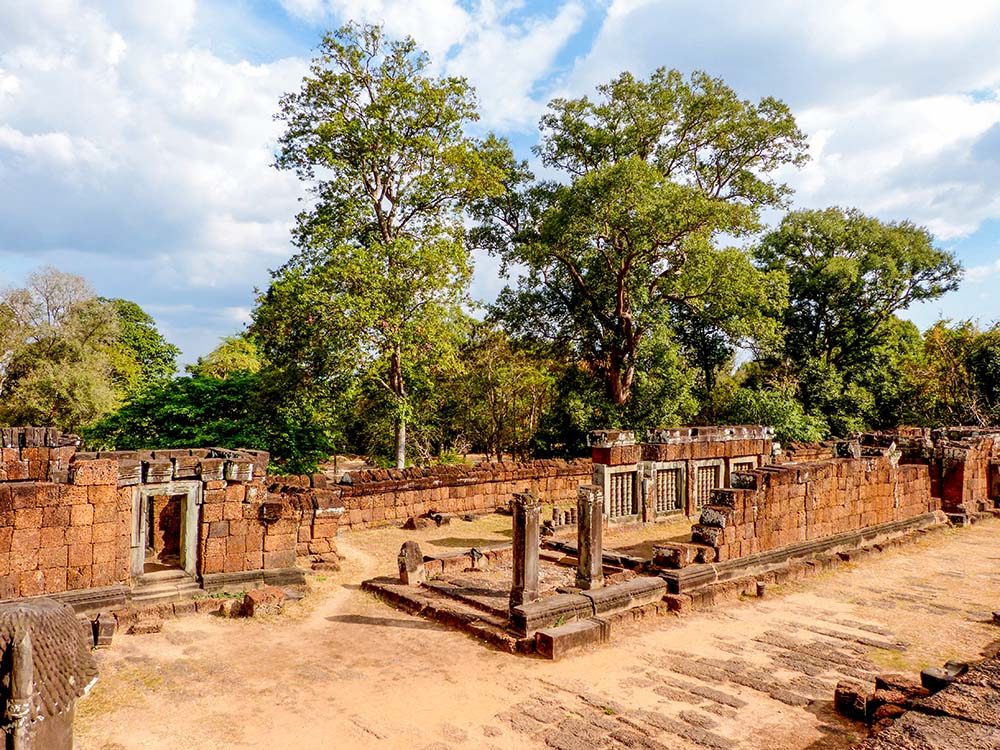 Although the temples are largely ruined, they won’t let you into some places unless you are properly clothed. Those are still Hindu and Buddhist monuments and you need to have your shoulders and knees covered when entering. So make sure you take a scarf with you, and you will be able to get everywhere without any problems.

The terrace is located on the former Royal Square and is about 350 meters long and 2-4 meters high. It’s named primarily because of its unique decoration; mainly the elephants carved from stone. The terrace was built in the Angkor Thom city complex and leads right to the Royal Palace, which unfortunately didn’t survive. It is estimated that a number of wooden buildings stood on it, of which none remained. The Elephant Terrace served primarily for royal military shows and other ceremonies from where the king could observe his subjects. 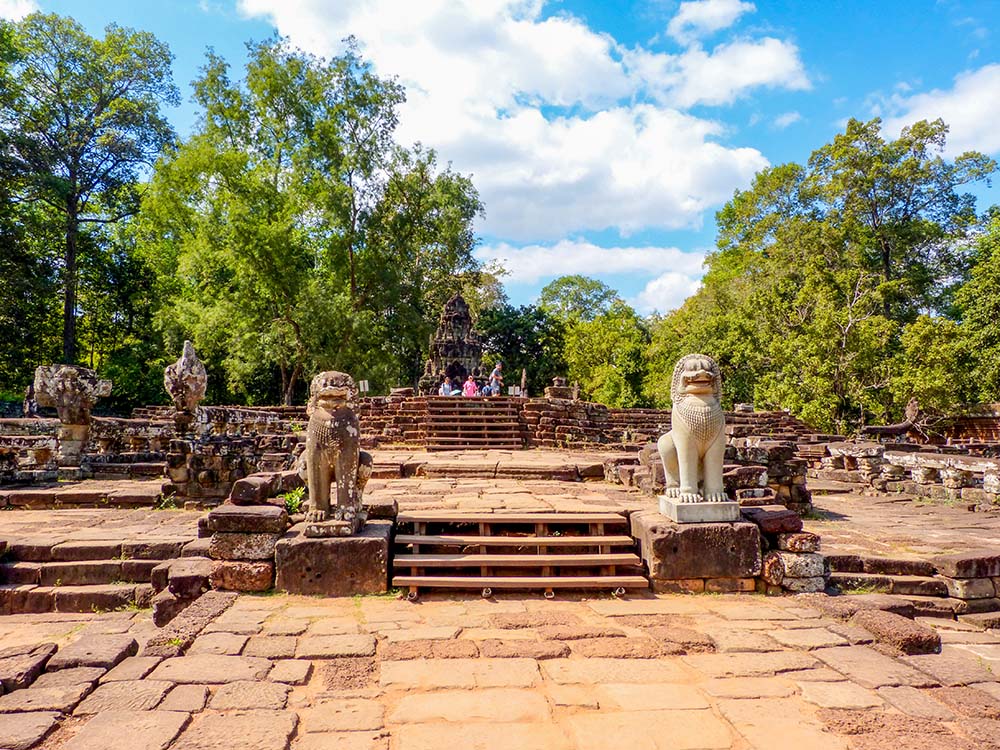 Elephant terrace is known mainly for carved elephants, but also for other animals

The temple is made up of a system of five interconnected water tanks. During the rainy season, the tanks are filled with water, so the temple’s surroundings are less accessible to visitors. You can reach the monument via a long wooden sidewalk that leads directly from the road. In the middle of the largest reservoir, there is a separate tower, the purpose of which is still unknown. There are four more tanks connected to the main pool with the tower, where the water flows through stone nozzles that are carved into the shape of an elephant’s head, a lion, a horse, and even a human. It’s not entirely clear what purpose the water in the tank served. The most popular theory says that the temple was built as an imitation of the sacred Himalayan Anavatapta Lake, which is believed to have healing effects. Other theories claim that it might have even been a kind of a Khmer spa. 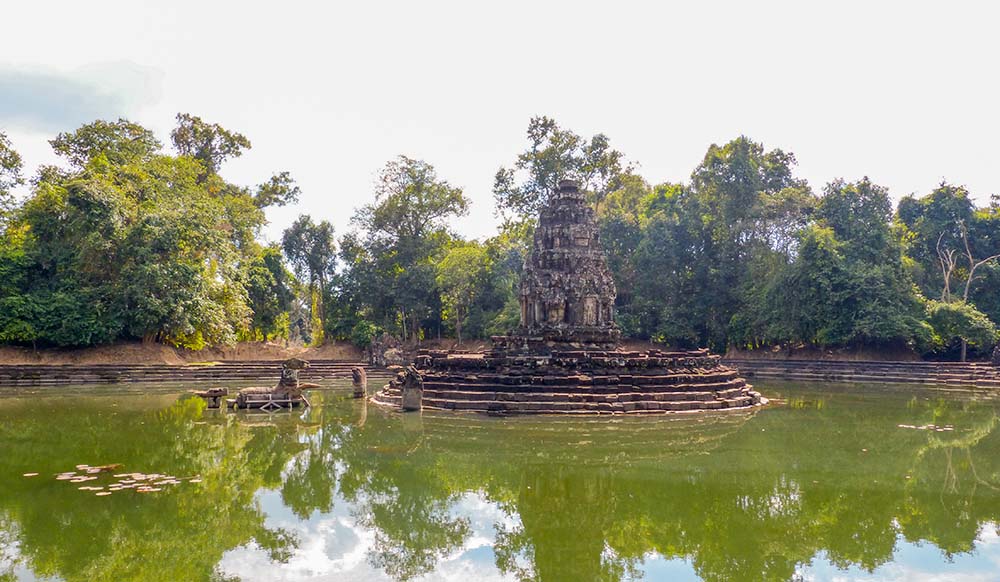 During the rainy season the temple literally baths

Pre Rup was built as the second state temple after East Mebon – it also lies in the north-southern axis. The construction was built on an artificial island surrounded by a large water reservoir. However, it has been dry for centuries and is barely noticeable at present. At the top of the three-tier pyramid, there are five brick towers. Each of them had a statue of a different Hindu god, but unfortunately, none of them survived. The most interesting are, however, three large towers on both sides of the eastern entryway. The sixth tower was probably never completed, or used as a material for other construction purposes. 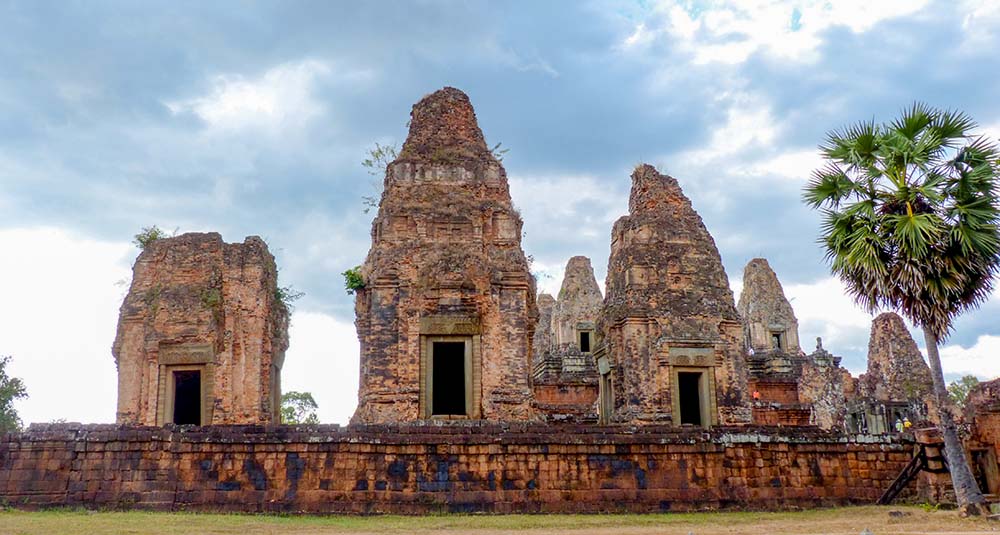 Preserved Towers of the Temple For Rup

This unique building was one of the largest in the entire Angkor Empire. At the time of the Empire’s gilded age, it had more than 100,000 inhabitants. It combined a temple, city, and a Buddhist school. A lot of information has been preserved about this monument, so we know that the richness of this temple came from a great deal of gold, silver, precious stones and pearls. The temple located within the complex was covered with up to 1500 tons of bronze. The entire monument has been damaged by the lush vegetation and the roots of tropical trees that have taken over the temple and its surroundings for several centuries. Nowadays, renovations are being done with respect to the dense undergrowth of the huge tree roots. At several places, the trees literally merged with the local structures to create breathtakingly mysterious “lost temple” atmosphere – one that has withstood the sands of time. 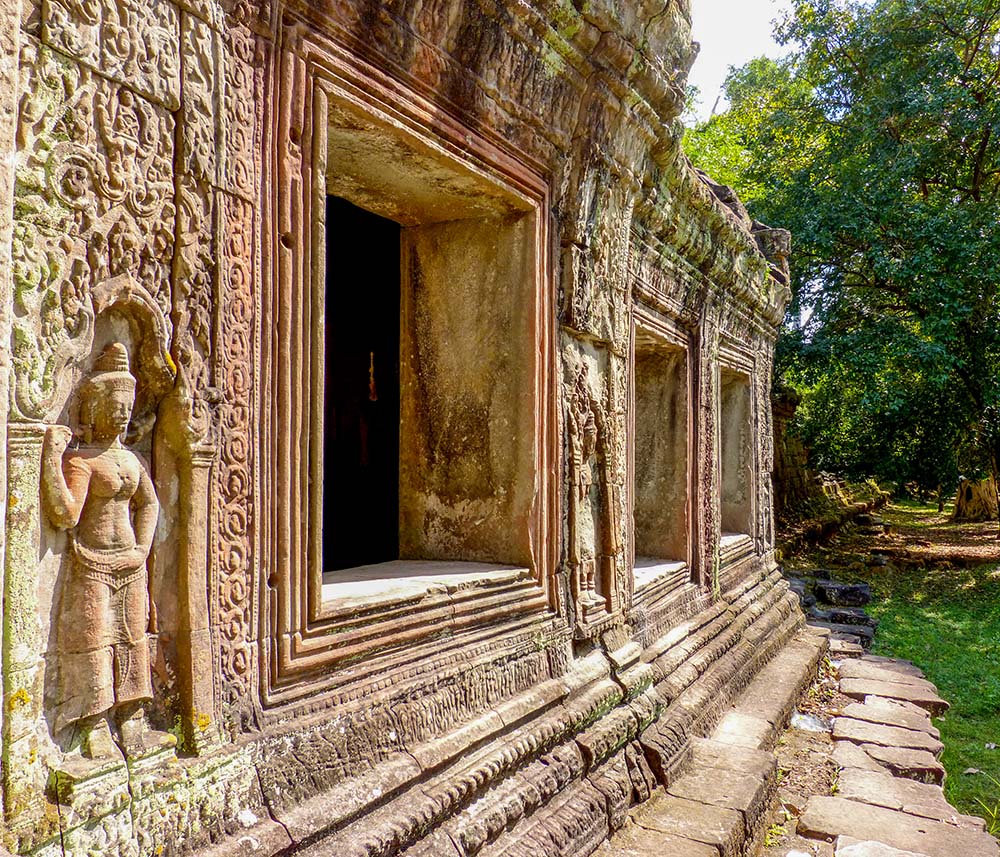 The Khmer were very precise, and they looked at every detail

One of the most visited and most photogenic temples that you definitely can’t miss. It is interesting first and foremost because it has been left as untouched as possible. The ancient walls are held in the clusters of branched roots of tropical trees that faithfully replicate the shapes of individual temples. This scenery creates a wonderful, otherworldly atmosphere. But with the growing number of tourists, some special measures had to be taken. Since the roots are becoming more and more devastating, wooden floors have been built in some places and a gradual reconstruction of parts of the temple has begun. 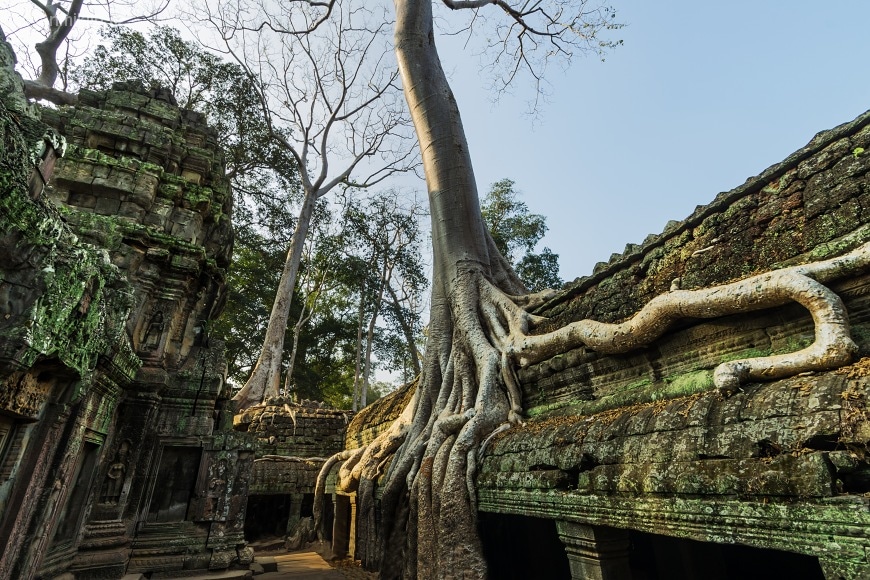 A small temple, which is often likened to the temple Ta Phrom. The monument hasn’t been reconstructed for a very long time and the temple has been left to its own demises for millennia. Currently there are works being done to repair some of the stone blocks and to make sure that the site isn’t dangerous to visitors. Still, it is a very beautiful temple, with a magical atmosphere of buzzing tropical cicadas. Probably the most photogenic is the eastern gate, which has been almost completely overgrown by roots. It would almost be a sin not to take pictures with it. 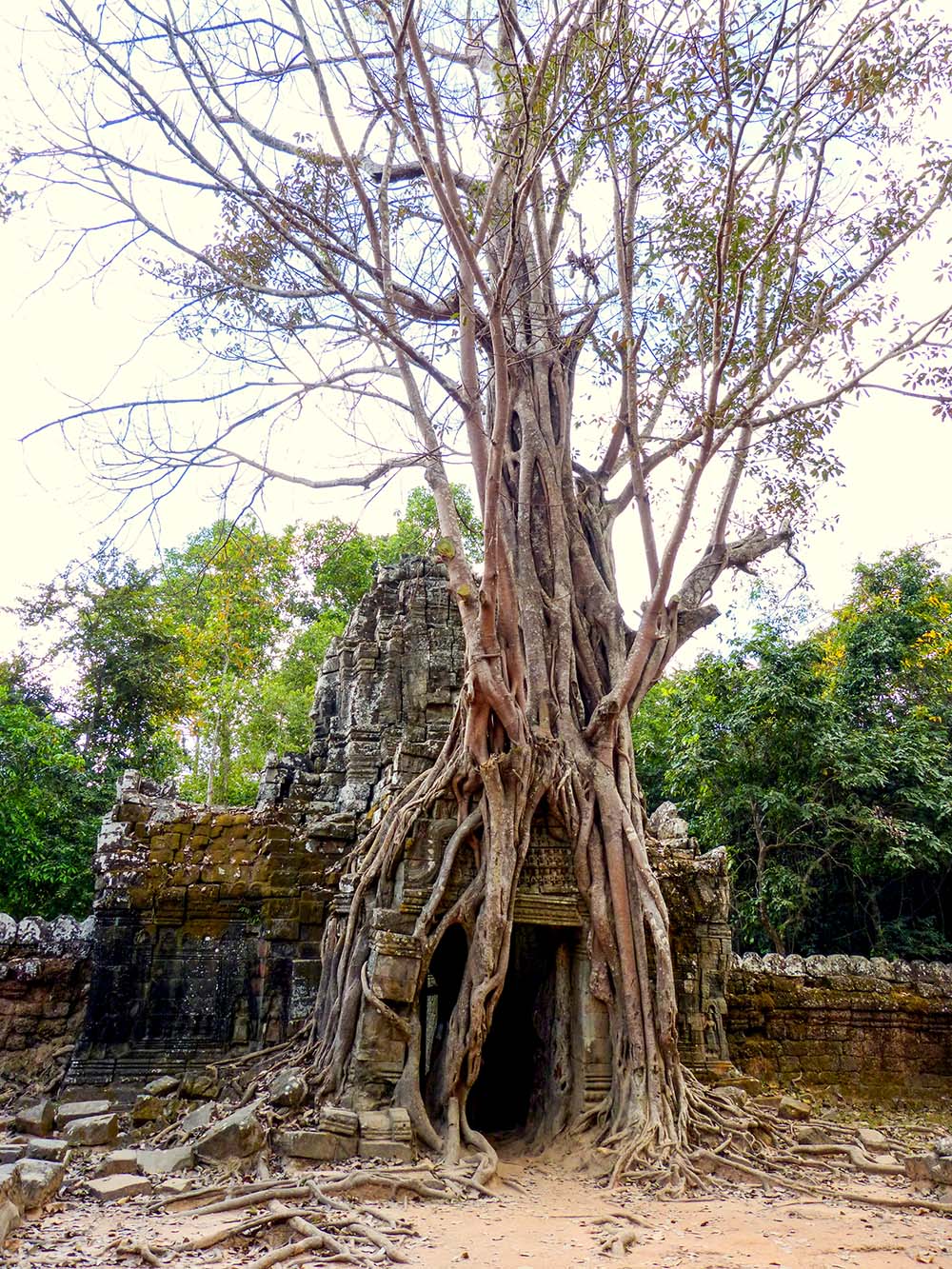 One of the most photogenic places in Angkor Wat

Read Next : Angkor Wat Travel Guide and Things to Know 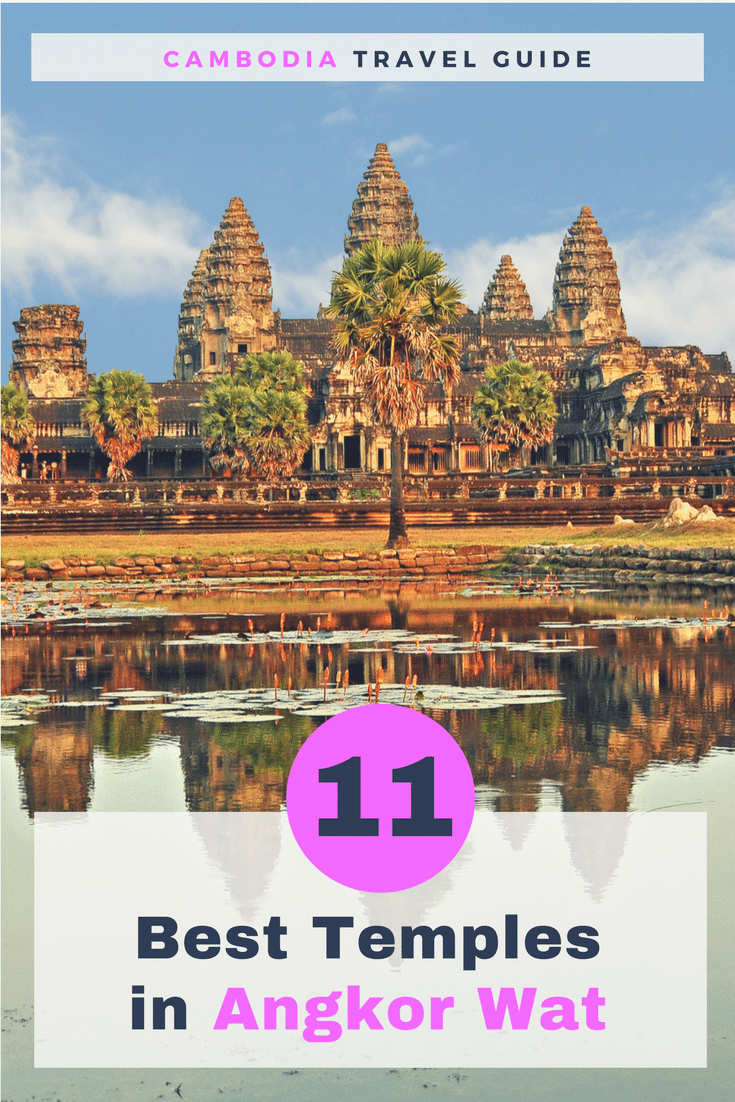